Step by Step Analysis of Strike Off Under Companies Act 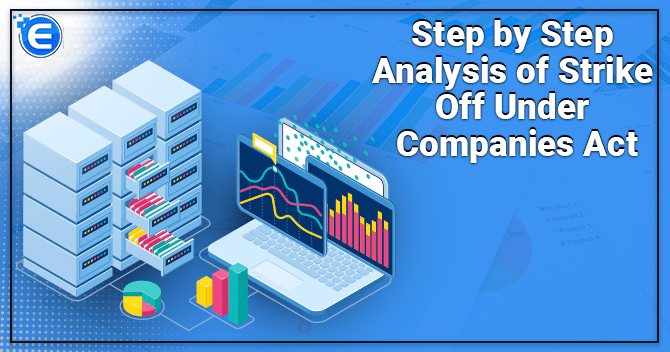 Once the name of the Company is registered, then it cannot be removed from the Register unless it is dissolved by the process of law, either as a result of its winding up or upon its amalgamation with another Company.

What are the different ways of striking off a company?

Different Modes of Striking Off:

What type of Companies can get strike off?

The companies that can get strike off are:

It is noteworthy to mention here that even a dormant company can move an application for strike off.

What type of companies cannot get strike off?

Type of Companies which cannot be Strike Off:

Strike off under Companies Act: Points to know

ROC may remove the name of a company from the register of companies if:

The ROC has to follow the following procedures for strike off by its own initiative:

ROC shall send notice in writing in Form STK – 1 to all the directors of the company at the addresses available on record, by registered post with acknowledgment due or by speed post.

Through the notice to company, the ROC will specify the reasons on which the name of the company is liable to be removed and shall seek response from company, if any, and the concerned company and its officer has to reply within 30 days from the date of receipt of notice.

The concerned ROC shall simultaneously communicate to the concerned other regulatory authorities like the Income-tax, GST Department i.e. having jurisdiction over the company, about the proposed action of removal or striking off the names of such companies and seek objections, if any, to be furnished within 30 days of notice.

ROC, before striking off, shall satisfy itself that adequate provision has been made for the recognition of all amounts due to the company and the payment or discharging of its liabilities.

By way of Application by the Company:

The Company can apply voluntarily with the Registrar of Companies for Striking off the name of the Company. The grounds that are applicable to the Company are as under:

Restriction on Making Application by the Company for Strike Off

If, any time in the previous 3 months, the Company has done any of the below-mentioned activities, then the Company shall not make any application for its strike off:

The Company will hold Board Meeting for passing a Board resolution for the purpose of Striking off the name of the Company and to authorize any director of the Company to apply to Registrar of Companies.

After passing of Board resolution if there are any liabilities then the Company will extinguish all the liabilities before the next step.

In case if any other authority regulates the company, then the approval of such authority shall also be required.

Application in Form STK- 2 to be filed by the Company (Government filing fees of INR 5000) along with following documents:

If a company confirms as dissolved, it shall cease to operate as a Company from the date of dissolution and the Certificate of Incorporation issued by the ROC to it shall be deemed to have been cancelled except for the purpose of realizing the amount due to the company and for the payment or discharge of the legal liabilities or other obligations of the Company.

The Corporate liability, if any, of every directors and officer who was exercising any power of management directly or indirectly, and of every member of the Company dissolved, shall continue and may be enforced as if the Company had not been dissolved.

Every time business is run it is started with a vision to last long but in some cases businesses may not be successful in the long run therefore there may arise a need to strike off the company. You are advised to consult professionals before arriving at a decision regarding strike off under Companies Act.

Read our article:Provisions Related to Registration of Charges under Companies Act 2013

According to the provisions of section 177 of the Companies Act, 2013 with Rule 6 of Companies...

Provisions of Conducting Board Meet...

Carrying out a business of the company effectively requires regular decision making and proper...

Procedure for Striking off a Compan...

We all must have heard about the defaulting companies’ situation. MCA had issued a notice to...