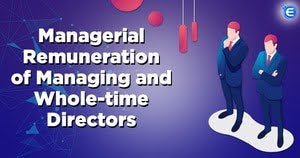 Managerial remuneration in the simple words is a remuneration paid to managerial personnel. Here managerial personnel includes directors both managing director and whole-time director and also the manager. As profits drive the business, incentives drive the directors of the business. It’s important, in a fiercely competitive corporate environment, to decide managerial remuneration in the management. Also, the incentives are necessary for performing the challenging role of managing companies. It is equally necessary not to go overboard with perks and pay. In India, it is required to monitor an unnecessary profit squandering by the companies and, at the same time, it is ensured that adequate and reasonable compensation is given to managerial personnel. The law intervenes while maintaining the balance through an act.

Section 197 of Companies Act, 2013 provides a maximum ceiling for payment of the managerial remuneration in a public company to its managing director or whole-time director and manager. However, it must not exceed 11% of the net profit of a company in particular financial year computed according to the provisions of section 198 except that the remuneration of the directors has not to be deducted from the gross profits.

In furtherance, the company in a general meeting with the approval of the Central Government may authorize the payment of remuneration exceeding to 11% of the net profits of the company with subject to the provisions given in Schedule V.

Except and otherwise with the approval of a company in general meeting, the remuneration payable to those directors who are neither managing directors nor whole-time directors must not exceed to—

— 3% of the net profits in any of the other case

The percentages mentioned will be exclusive for any fees payable to directors who attend the meeting of the board/committees or for other purposes as decided by the Board.

Remuneration paid by a Company when no Profit or Inadequate Profit

In case of any financial year, where the company has made no profits or its profits are inadequate, then the company must not pay to its directors including both managing or whole-time director any remuneration except according to the provisions of Schedule V and approval of the Central Government.

However, when Schedule V is applicable on the grounds of no profits or inadequate profits, the provisions in relation to the increase in remuneration of any director must not have any effect unless such increase is according to the conditions specified in such Schedule and required the approval of the Central Government.

Remuneration of Directors in other Capacity [Section 197(4)]

(a) The services rendered are of professional in nature; and

(b) In the opinion of the Nomination and Remuneration Committee or the Board of Directors as the case may be, the director possesses the requisite qualification to practice such profession.

A director can receive remuneration in the form of fees for attending any of Board/Committee meetings or for other purposes as may be specified by the Board. Provided that the amount of particular fees must not exceed the amount as specified.

The Board has the right to decide different sitting fee which will be payable to independent directors other than whole-time directors.

Monthly Remuneration of Directors and Managers

A director or manager has to be paid remuneration by way of a monthly payment or by a fixed percentage of the net profits made by a company. It can be paid by either way partly by one and partly by others. [Section 197 (6)]

An independent director must not be entitled to a stock option, and he can receive remuneration in the form of fees or reimbursement of expenses for participation in the Board or profit related commission as prescribed and approved by members. [Section 197 (7)]

Any director who receives of any commission by the company and who is a managing or whole-time director of the company must not be disqualified from receiving any further remuneration or commission from such holding company or subsidiary company subject to its disclosure made by them in the Board’s report. [Section 197 (14)]

Remuneration Drawn in Excess of the Prescribed Limit

In case if any director receives or draws, directly or indirectly, by way of remuneration any sum of amount which is in excess of the limit prescribed and also without any prior sanction of the Central Government, then it is required by the director to refund such amount back to the company. [Section 197(9)]

The company cannot waive any recovery of the amount as refundable to it under sub-section 9 unless permitted by the Central Government. [Section 197 (10)]

Is Insurance Premium a Part of Remuneration

When any insurance is taken by the company on behalf of its managing director or whole-time director, Chief Financial Officer, Chief Executive Officer, or Company Secretary to indemnifying them against any liability in regard to any negligence, misfeasance, default, breach of trust or breach of duty, then the premium paid on such insurance must not be treated as part of the remuneration payable to any personnel.

However, if any of the persons is proved to be guilty, the premium paid on such insurance will be treated as part of remuneration. [Section 197(13)]

Disclosure of Remuneration in the Board Report [(Section 197 (14)]

Every listed company have to disclose in the Board’s report, the ratio of the remuneration paid from each director to all employees and also other such details as may be prescribed.

The central government rules specified the following disclosure made by the listed company in its Board’s report:

(iv) Number of all permanent employees in the company

(i) If employed in the current financial year, and has received the remuneration in that year, in the aggregate, which must not less than 60 lakh rupees;

(ii) If employed in that financial year, and has received the remuneration for any part of the year, in the aggregate, at a rate which must not less than 5 lakh rupees per month;

(iii) if employed in a whole financial year or part, and received remuneration in that year, in the aggregate, at a rate which, is in excess of that is drawn by a managing director or whole-time director which is held by himself or with his spouse, must not less than 2% of the equity shares of a company.

The particulars of employees posted and working outside India, but not being a director or his relatives, draws more than 60 lakh rupees per financial year or 5 lakh rupees per month, must not be included in the Board’s report but such particulars have to be filed with the (ROC) Registrar of Companies while filing the financial statement and Board Reports. The particulars must be available for any shareholder on a specific request made by him during the course of the annual general meeting when the financial statements for the financial year are proposed to be adopted by the shareholders.

A company making profits in a financial year has to pay remuneration to all its managerial persons according to Section 197.

When in any financial year during the currency of tenure of a managerial person, if a company makes no profits or if its profits are inadequate then without the approval of Central Government it can pay remuneration to the managerial person not exceeding the higher of the limits as mentioned below:

Explanation: – It is clarified that for the period less than 1 year, the limits shall be pro-rated.

The Schedule V also specifies certain conditions and additional disclosures which are to be made in an explanatory statement to the notice of the general meeting, when remuneration is required to be paid according to the Schedule V

Section III of Schedule V talks about special circumstances under which companies make no profit or inadequate profit to pay any remuneration to its managerial personnel in excess of amount as provided in Section II above, or with Central Government’s approval.

Net Profit for the purpose of Managerial Remuneration (Section 198)

Section 198 of Companies Act, 2013, states about the manner of calculations of net profits of any financial year for a company in regard to Section 197.  Sub- Section (2) of the section states the calculations of sums for which credit will be given whereas sub-section (3) specifies the sums for which credit must not be given while calculating the net profit. In the same way, sub-section (4) and sub-section (5) specifies the sums which must be deducted and which must not be deducted while calculating the net profits.

Recovery of the Managerial Remuneration in certain cases (Section 199)

This is a newly added provision introduced in the Act. It specifies about the recovery of remuneration that including stock options as received by the specified Managerial Personnel. When the benefits are given to personnel and are found in excess, it must be recovered.

The new Act has considerably liberalized the provisions concerning Managerial Remuneration, will be subject to adequate disclosures to the shareholders. The necessity of approaching Central Government for the approval has been substantially dispensed with-

For remuneration payable to any Director in any other capacity, if such services are of professional nature, no approval of the Central Government is required, when the Nomination and Remuneration Committee or Board of Directors is of the opinion, that the person possesses the necessary qualification for the practice of the profession.

Limited Liability Partnership in In...

Limited Liability Partnership in India, is the one which is registered under the LLP Act, 2008....

The concept of producer company has been introduced to organize the agriculture-related actives...

Provisions of Conducting Board Meet...

Carrying out a business of the company effectively requires regular decision making and proper...