We cover all the set cinema audit parameters and also provide our clients with relevant insight into every area of their cinema package. It allows them to build a deeper understanding of their delivery. We will also work closely with you to support your media strategy, ensure that you have the strategy data and advice you as per the prepared report.

The number of Cinema halls has increased in our country in recent years. The primary aim of a cinema hall is to provide entertainment to the public. The cinema halls in the current time are now not only providing the opportunity of watching movies but in some metropolitan cities, they also offer restaurant and bar facilities. Hence, it has become of prime importance to maintain proper accounts of cinema halls, and its regular audit must also be conducted regularly. Cinema halls basically earn revenue from the sale of tickets, distribution of movies, collection from canteen, advertisements, and rental income.

What must be verified by an Auditor in a Cinema Audit?

An auditor needs to verify the income from various sources in the following mentioned manner:

What Points Must be Considered while Conducting Cinema Audit of Expenses?

While conducting Cinema Audit of expenses, the following points must be considered:

What is the Purpose to Conduct Cinema Audit?

The purposes of conducting a cinema audit are as follows:

What are the Areas Covered for Conducting Cinema Audit?

The following areas must be covered while conducting Cinema Audit: 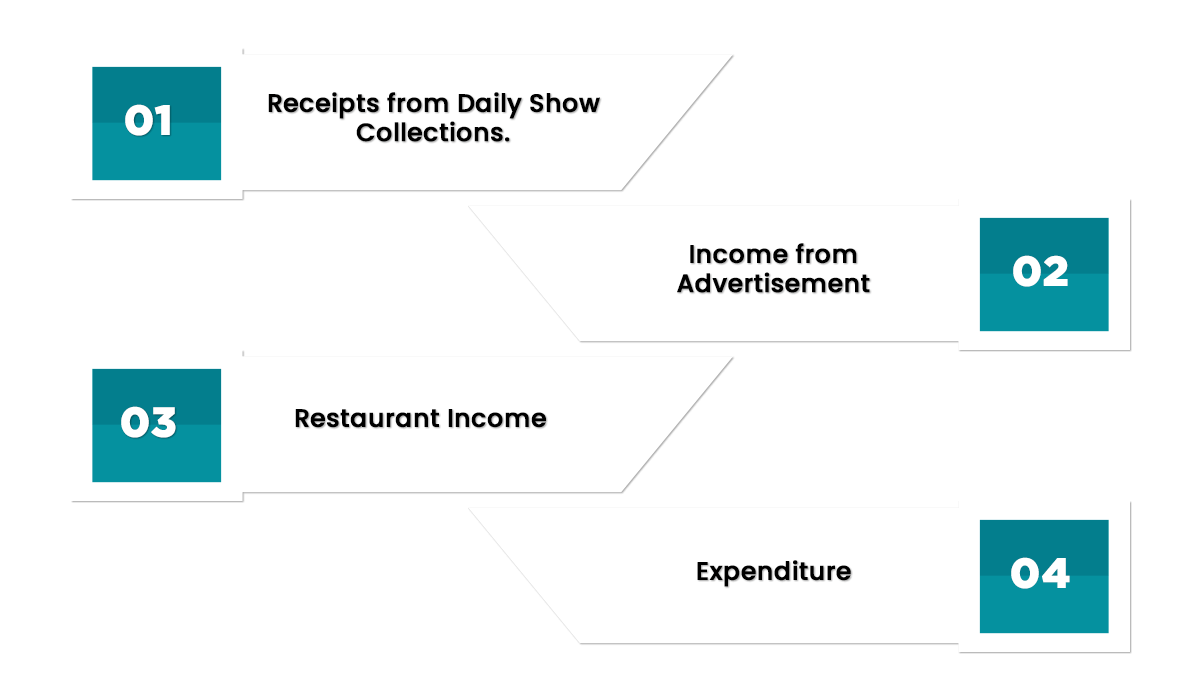 For the audit of receipts from daily show collections for the purpose of cinema audit, the following steps must be involved:

Verify the charges that were collected for advertisement slides and shorts by reference to the Registrar of slides. It also includes shorts exhibited kept at the cinema as well as with agreements entered into with advertisers in this regard.

What are the Receipts that must be Verified in Cinema Audit?

The following mentioned receipts of the cinema hall must be verified in cinema audit:

What is the Role of Auditor in Cinema Audit?

The auditor has to verify the following aspects:

Regarding Sale of Tickets

The auditor needs to verify if:

While Verifying the receipts through advertisements

While verifying the collections through restaurants

While verifying the payments to distributors

The auditor, in general, must ensure that the advance paid to the distributors for a film is either adjusted against the amount due to them or has been returned by them after running of the film. If the amount to be received remains outstanding for an extended period, the auditor has to verify that they are excellent and recoverable, if not; a provision is to be made for the amount which is considered irrecoverable.

How can Enterslice Help You?

The particular steps involved in cinema audit are as follows:

• Audit of Income from Advertisement.

• Audit of Income from Advertisement.

• Auditing the expenditure made.

The roles of the auditor in cinema audit are as follows:

• Verify the cash and bank balance

• Verify the Allocation of Expenditure

• Verify the value of an unexpired purchased film

When a ticket is torn it is supposed to be kept on hand by the cinema hall for the purpose of audit:

• The district manager at the end of the month does a physical audit of the tickets to verify that they match with the numbers from the sales sheet.

• It can also be used for internal accounting purposes.

Movie productions usually have an in-house accountant’s. They keep very detailed accounts of all expenses, including vouchers and receipts for even the smallest expense. As such audits are not often necessary. But if needed internal or external audits can be conducted with ease.