NGOs are established as public trusts as per Trust Laws, or as per Societies Registration Act or as Companies under the Companies Act, 2013. All these acts apply to entities as per their choice of the memorandum of association. Further, this act requires the NGO to receive a foreign contribution for getting its books of accounts audited by the Chartered Accountants.

Non-Governmental Organizations (NGOs) play a vital role in the process of social and economic development of the economy. With passing time, there can be said to be a substantial increase in the activities of the Indian NGOs. The Ministry of Corporate Affairs brought a uniform accounting and reporting framework for NGOs

NGOs are established as public trusts as per Trust Laws, or as per Societies Registration Act or as Companies under the Companies Act, 2013. All these acts apply to entities as per their choice of the constitution. Further, this act requires the NGO to receive a foreign contribution for getting its books of accounts audited by the Chartered Accountants.

The NGO must get its accounts audited as per the Incorporation Law depending on their mode or form of Registration. NGO Audit must be done as per the Societies Act, Trust Act, or Companies Act, 2013. NGO Audit must also be done as per the Income Tax Act, 1961.  As prescribed in Section 12A (b), the Income-tax law audit becomes compulsory for NGOs where the total income of an entity exceeds the maximum amount which is not chargeable to Income Tax in any previous year. The receivables of an organization should be compulsorily audited as per Section 12 A (b) of the Income Tax Act, 1961.

What is an NGO or Non-Governmental Organization?

NGOs are not owned by any particular person. They cannot distribute profits by way of dividends. Whatever profits are earned by NGOs from the economic activities are reinvested or spent on appropriate non-profit activities.

The general source of revenue for non-governmental organizations is donations, funding of grants from unilateral and multilateral agencies, or through membership fees, or interest and dividends on investments or through any miscellaneous sources.

The following forms of associations may act as NGO:

What is the Benefit of NGO Audit?

An audit is an independent investigation of the activities done in an NGO which concludes whether they are in good order or not.

Though NGO Audits are time-consuming to some entities, they have two significant benefits:

What are the Formats of Financial Statements for the Purpose of NGO Audit?

The fund-based accounting is considered relevant for an NGO. The Income and Expenditure Account must have three columns, to present income and expenses with respect to the restricted funds as differentiated from unrestricted funds. The columns which have to be considered by the company are:

NGOs must separate designated funds from other unrestricted funds in its internal accounting records. The NGOs musty take utmost care while publishing the accounts, so as not to provide a distinction between the two. The NGOs at the time of auditing must provide an integrated balance sheet.

The financial statements must be prepared after confirming relevant statutory requirements and accounting standards.

What is the Task to be performed by an Auditor while Conducting NGO Audit?

The Auditor needs to conduct the following tasks while conducting an NGO Audit:

What are the Types of Financial Statements for Conducting NGO Audit?

There are four types of NGO Audit done for financial statements: 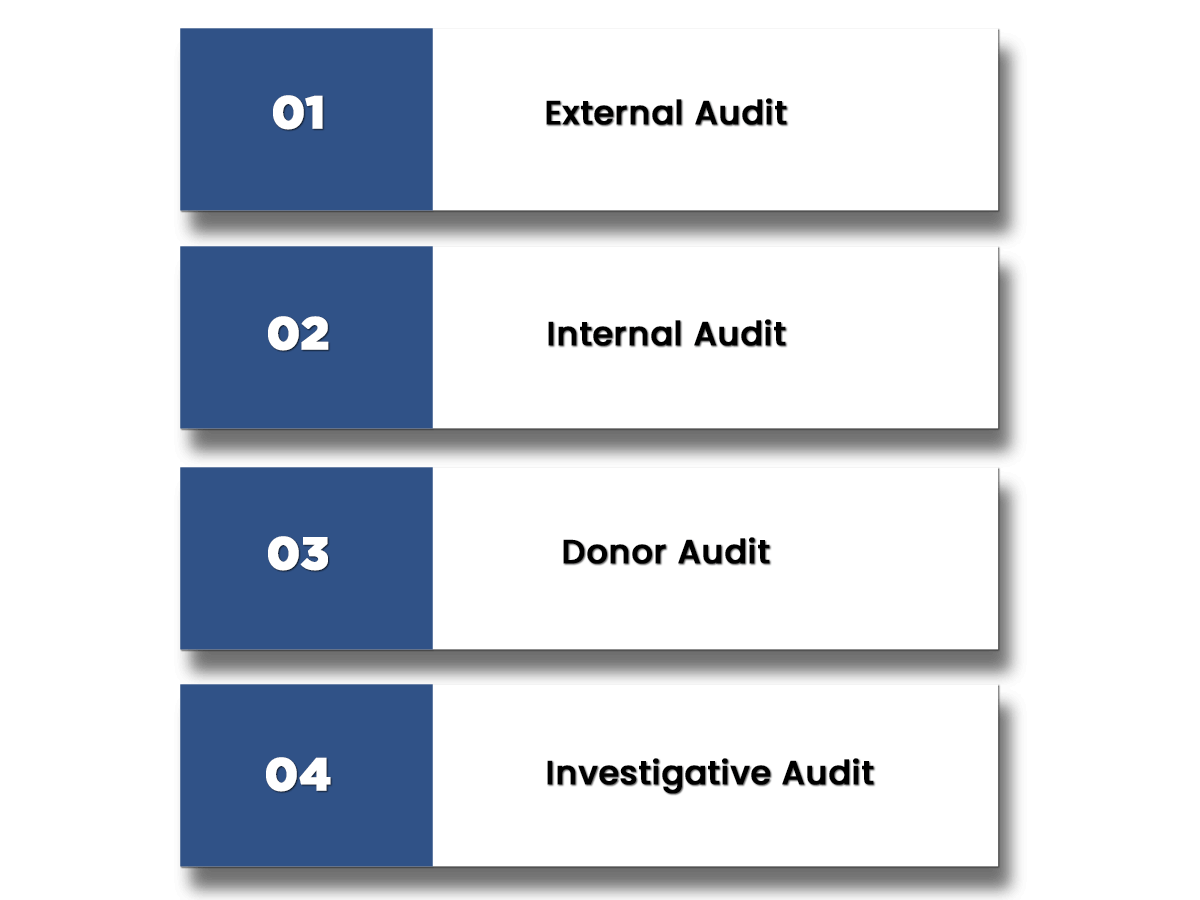 External audit- checks whether Financial Statements are accurate and fair

An external audit is generally carried out by independent auditors. They give a professional opinion as to whether financial statements are true and fair, based on carefully checking a sample of the records. Their opinion is important because it provides evidence that financial reports are reliable - which means a lot to stakeholders like trustees and donors.

Donor Audit- checks whether grant terms and conditions have been followed.

A donor audit can be carried out by the organization’s normal external auditors (on a separate or additional engagement to the standard year-end Audit) or sometimes the donors themselves carry out this Audit. This brings confidence in donors that their funds have been properly used and the grant conditions are being complied with. A successful NGO audit is often a requirement for further funding.

Investigative Audit- for evidence relating to a specific suspected wrong-doing

An investigative audit is carried out when an organization suspects a specific problem generally fraud and auditors are brought in to establish the facts. The auditors may provide evidence for further action that the organization may decide to take.

What must an Auditor’s Report Include in an NGO Audit?

The Auditor's report in must have included the Balance Sheet of Society Name, with the address as on 31st March of the financial year. They must also attach the Income & Expenditure Account, and Receipts & Payments Account for the year ended on that date. The format of the report must be as follows:

b) In the case of Income & Expenditure Account, the surplus amount for the year ended on that date.

c) For receipts and payments account, payments of the society during the year ending date.

What is the List of Documents to be Included in Annual Accounts of NGO Audit?

The list of documents to be included in audited annual accounts for NGO Audits is as follows:

What are the Services Provided in Enterslice for NGO Audit?

In Enterslice, we cover issues related to NGO audit, covering:

NGOs must appoint a Chartered Accountant to audit the books of account. The auditors must have visited at least once a year or based on the requirement and examine the books of accounts. In case of any discrepancy, they must provide proper suggestions. Finally, they need to prepare a Balance Sheet, Expenditure and Income and Receipt and Payment Accounts to be submitted to the donors and the line departments.

NGOs, in their interest, should get their accounts regularly audited, even if there is a negligible transaction, every year and also must file income tax return. Keeping the compliance updated is critical for obtaining grants from the Government, corporate and other charitable sources, as they ask for the last three years audit report. As per the Income Tax Act, Auditing account is essential for having revenue beyond a certain level that may keep changing in the budget of the Union Finance Minister every year.

According to the applicable laws and regulations, all registered NGOs must maintain a system for recording and submitting all types of financial transactions made by them to implement projects and run their organization. Since finances are a crucial part of organizational management, it is always a better idea to maintain a 'Financial Policy' for following procedures to keep the accounting system effective, transparent, and easily manageable

One can check the work of the NGO by looking at the audited financial statements of the organization.

The fees of a CA vary from firm to firm. We at Enterslice provide the best services at very impressive and low charges.

NGOs receives grant from foreign institutions as well. So it is the duty of the Auditor to check whether it is accepted as per the provision of financial rules and regulations of the nation or not