A Public Limited Company, as per the Companies Act 2013, has limited liability and offers shares to the general public. Anybody can acquire the shares or stocks in a public limited company by way of an initial public offering or through trades on the stock market. A Public Limited Company is strictly regulated and is required to publish its true financial health to its shareholders; hence it must get its accounts, and financial statements audited.

A Public Limited Company is said to be a separate legal business entity that offers its shares to be traded on the stock exchange for the general public. According to the Companies Act 2013, it is mandatory for a Public Limited Company to present the financial position and status to the general public to maintain its transparency. Hence, a public limited company must get its accounts audited. The primary purpose of the public limited audit is to determine whether a company is providing an accurate representation of its financial situation. It is done by examining the information submitted to the Auditor, such as books of account, bank balance, and financial statements.

All public limited companies must undergo an audit process. Irrespective of the nature of the business or turnover, these companies must get their annual accounts audited each financial year.

What is the Procedure to Conduct Public Limited Audit?

The Procedure to Conduct Public Limited Audit is as follows: 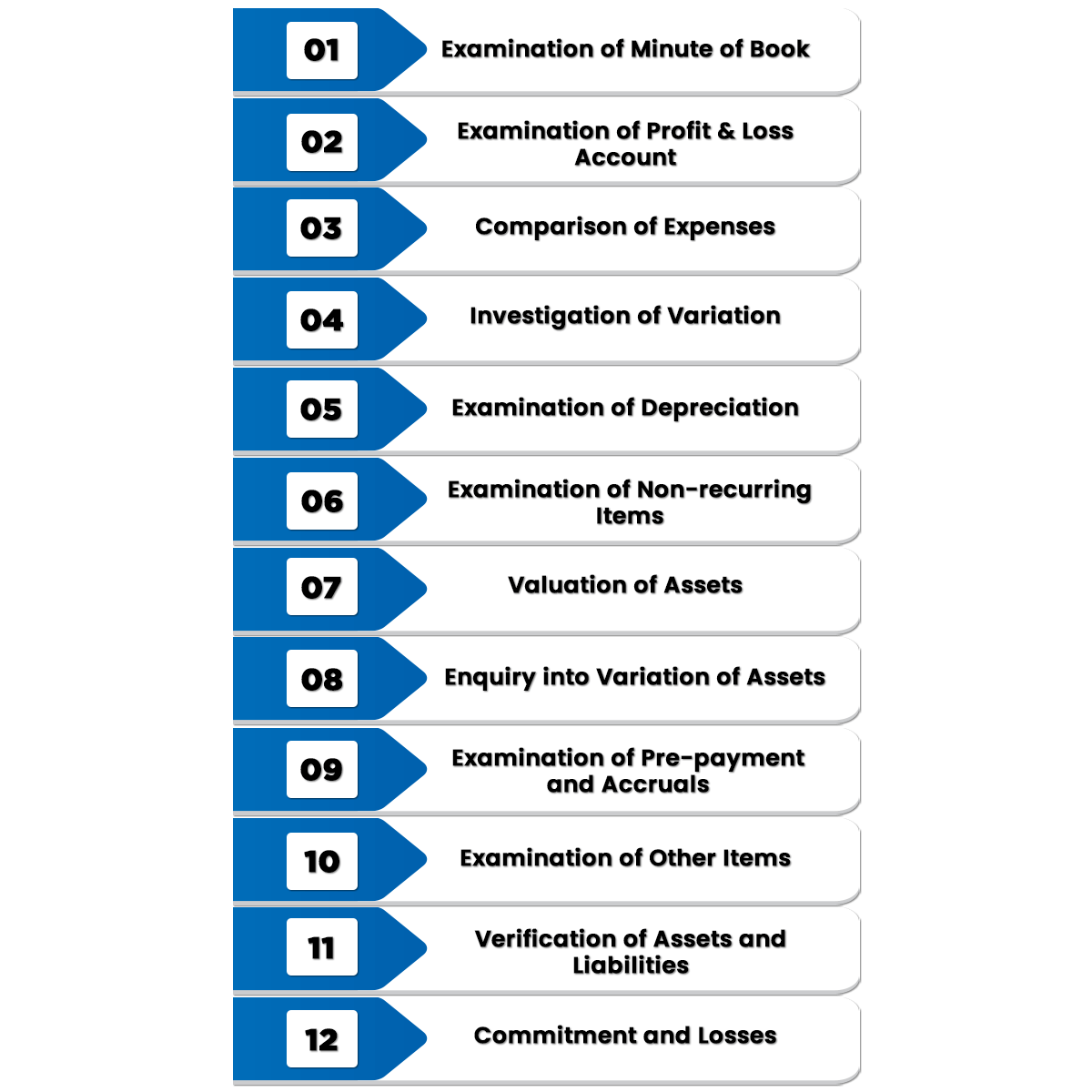 The Auditor needs to examine the minute book of the concerned company, especially of those items that have a bearing on the accounts.

The Auditor in a public limited audit must examine and compare the profit and loss account with that of the previous year's accounts. By way of comparing they check the material difference between the two.

The Auditor compares the increase or decrease in the expenses between the two periods. They examine the turnover and then make a necessary adjustment regarding the allowances, sales tax, or any other variations during the period of which audit is done.

The Auditor should investigate the causes of any variation in the gross net profit and pay attention to the valuation of closing stock.

The Auditor must see whether there has been any change that is charged in the current year and if done then what its effect in the revenue account is.

The Auditor in a public limited audit should investigate items of non-recurring nature. For example, profit made or loss suffered in the sale of a fixed asset.

The Auditor must pay attention to any substantial change in the fixed assets as compared to the previous year, especially regarding the valuation of assets.

Inquiry into the Variation of Assets

The Auditor needs to inquire into any variation in the current assets as compared to the previous years.

Examination of Prepayment and Accruals

In case if there is any material alteration in the pre-payments and accruals, the Auditor should pay attention to such a variation.

Examination of Other Items

The Auditor should pay attention to the other items of the balance sheet from any substantial change from the usual figure.

Verification of Assets and Liabilities

The Auditor must verify the assets and liabilities that are owed.

The Auditor must ascertain whether any capital commitment exists and if there is any item on which a subsequent loss may arise and if any provision has been made thereof.

Who can conduct a Statutory Audit in a Public Limited Company?

The following persons can perform a statutory public limited audit:

The Companies Act, 2013 disqualifies the following firms or individuals from becoming an auditor:

What is the Role and Requirement of Statutory Auditors in a Public Limited Audit?

How is the First Auditor Appointed for Public Limited Audit?

The procedure for the appointment of the first Auditor for public limited audit is explained below:

1) All public companies with a paid-up capital of ten crore rupees or more;

2) All public companies having a turnover of one hundred crore rupees or more;

3) Every public company having outstanding loans or borrowings or debentures or deposits exceeding 50 crore rupees or more.

1) Consent to become an auditor.

1) Considering information and documents received and considering that the qualification & experience are commensurate with the size & operations of the company.

2) Recommending the name of the Auditor to the members.

What are the Components of an Audit Report in a Public Limited Audit?

Once the public limited audit is completed, the auditor issues an opinion by way of the audit report on the financial statements that fall into one of the following four categories: 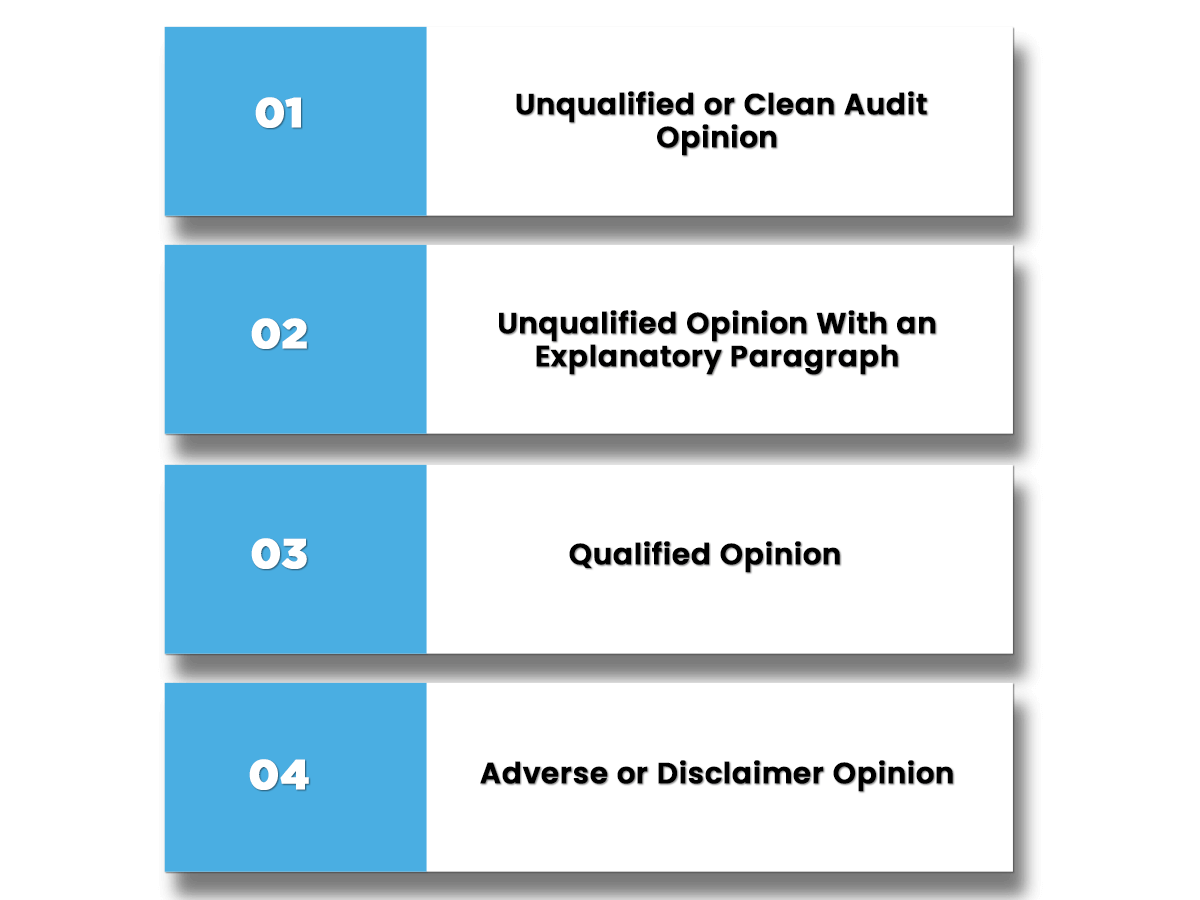 Unqualified Opinion with an Explanatory Paragraph

This type of report is generally issued when the auditor believes that the financial statements are fairly presented in all material respects in conformity with Indian Accounting Standards. They also need to discuss additional information. For example, an auditor might note a change in an accounting principle from a previous year, or that there is substantial doubt about the company’s ability to continue as a going concern.

An adverse opinion is a failing grade that is issued when an auditor believes the financial statements taken as a whole are materially misstated or do not conform to the prescribed Accounting standards. An adverse opinion generally signals significant problems that will make it difficult for a company to attract investors or access capital. In a disclaimer of opinion, the Auditor declines to express an opinion because he or she was unable to access enough information to form an opinion, or because the company restricted the scope of the audit. This, too, would typically signal significant problems.

How is Public Limited Audit Conducted in Enterslice?

An audit of a public limited company, the rights and duties of the company auditor, cannot be limited by the Articles of Association of the company or by way of any resolution passed in the general meeting.

In a public Limited Audit, the audit must be conducted by a qualified Chartered Accountant (CA).

In a Public limited audit, the Auditor's report to the members of the company.

No, a dormant public company does not need to get its accounts audited.

There are four types of audit reports:

The Auditor's report is a written letter from the Auditor containing the opinion of whether a company's financial statements comply with generally accepted accounting principles (GAAP). The independent and external audit report is typically published with the company's annual report.

Concealment of wealth, whether earned legally or illegally, is not new. To curb this practice of money laundering, the central government has brought speci...