Winding Up of a Company

Winding up of a Company - An Overview

Non-Compliance with the above provisions would lead to several criminal and civil liabilities.

Benefits of Winding Up of a Company

The following benefits are present for winding up of a company: 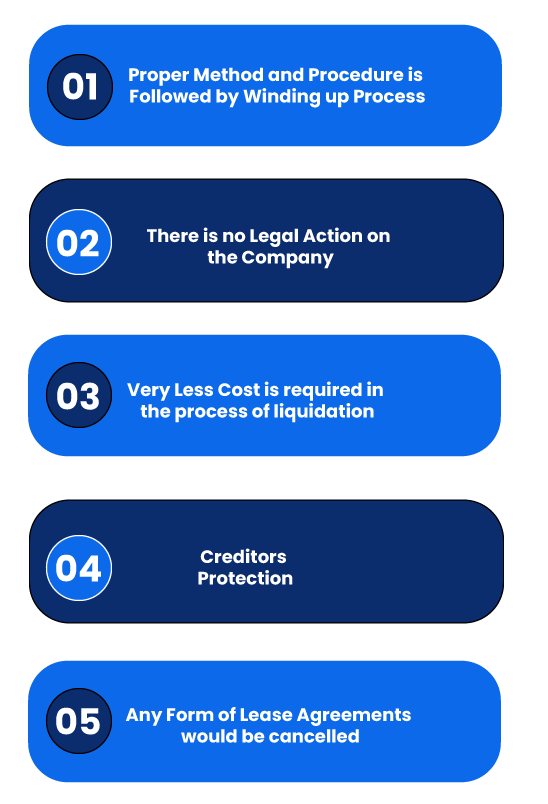 Procedure- Winding up of a Company

The amendment in 2020 brought out by the Ministry of Corporate Affairs speaks about the rules related to winding up of companies. The latest regulation which would affect winding up of Companies is the Companies (Winding-Up) Rules, 2020 which have come into effect on 01 April 2020.

As per the new rules, all winding up proceedings related to private companies would be handled summarily and this will reduce the overall burden of the NCLT. The procedure for winding up a company must go in according to section 361 of the Companies Act, 2013.

Such procedures would only be utilised by companies that have assets with a book value which is lesser than 1 crore, then the central government would consider the process of winding up summarily.

A petition can be filed by the (i) Company; (ii) any contributory or contributories; (iii) the Registrar; (iv) any person authorized by the Central Government in that behalf; and (v) Central or State Government in case the Company has acted against the interests of the sovereignty and integrity of India, the security of the state, friendly relations with foreign states, public order.

The following has to be considered for winding up of a company utilizing the above method:

After this the Central Government would appoint the official liquidators for the process under the approval method of winding up. As per the 2020 rules related to winding up the following has to be carried out:

Any form of claims which have to be provided has to be carried out by the official liquidator of the company. Such claims processes have to be carried out within 30 days. If there is some form of expiry of the time period for making the claims, then the list of creditors would be arranged as per the requirements of the Central Government.

Winding Up Order- As per the report submitted by the Official Liquidator, the Central Government will review the same and the winding up order is carried out as per the requirements.

Note: The Central Government has brought out such notification in order to implement the summary procedure under the 2020 rules. Such rules would reduce the burden which is considered or taken by companies which utilize the winding up procedures which is followed by the NCLT.

What Documents are required for Filing an Appeal for a Winding up of a Company Order?

The following documents are required for filing an appeal for a winding up of a company order:

How to reach Enterslice for Winding up of a Company

The summary procedure for winding up of a company is present in section 361 of the Companies Act, 2013. Such procedure is utilised to dispense winding up cases filed by the company as soon as possible.

If a company is liquidated due to bankruptcy, then all the assets would be sold in order to settle all the debts and liabilities.

There are two types of winding up: Compulsory Winding up and Voluntary Winding Up.

Yes compulsory winding up can be executed by a tribunal or a court.

Yes a resolution for winding up of a company can be passed. Such resolution has to be a special resolution passed by the company.

Scheme of Arrangement for Corporate Debtor going into Liquidation

The conundrum as whether section 29A of Insolvency and Bankruptcy Code, 2016 will apply to scheme of arrangement under section 230 of the Companies Act, 20...

Consolidation of Claims and Verification under IBC, 2016

Winding up is a process to dissolve a company or put an end to its corporate existence. There are several reasons for winding up of a Company such as loss,...

Winding up is a process to dissolve a company or put an end to its corporate existence. There are several reasons for winding up of a Company such as loss,...