Impact of GST on Solar and Renewable Energy 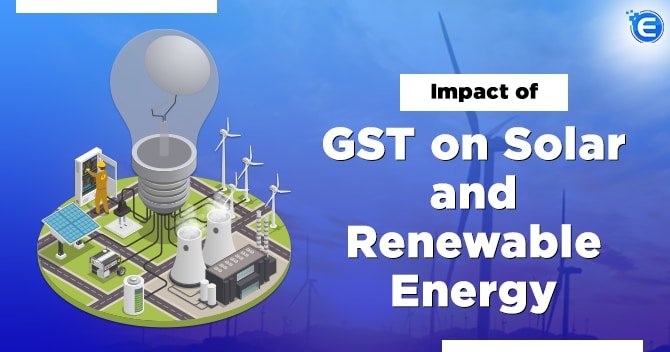 Effective GST implementation strategy is required to ensure your business is GST compliant. In this article we will discuss about the impact of GST on Solar and Renewable energy.

The current tax regime provides for a complex multi-city tax environment, increased compliance obligations, and a tax cascading effect. To address such big problems for businesses, GST has been introduced as a comprehensive consumption based end point tax levied on the supply of goods or services. GST will replace the majority of indirect taxes and GST aims at providing a seamless credit. Besides simplifying the current system and further lowering the costs of doing business, it will also organize the overall supply chain management system.

Electricity supply comes under no. 53 so it is expected to continue to be an exempted item under model GST laws. Recognizing the same for renewable energy projects, whatever GST paid on inputs, capital goods and services would continue to be a cost. Therefore, we believe that in short run there will substantial increase in the cost of procurements for solar business.

The Goods and Service Tax has been rolled out from 1st July 2017 as per the GST Council meeting on 18th June 2017. The solar industry has been considering GST as the biggest disappointment for the energy sector, the proposed 5% tax GST rate for solar modules.

GST has been imposed on most other renewable energy projects and equipment including solar batteries, inverters, cables, windmills, waste to energy plants, biogas plants, and other renewable energy generating systems. They have been classified under the 5% GST Rate. The new GST regime will, therefore, result in an increase module cost by 5%, Approximate 12% in inverter cost and 3% to 5% in all maintenance costs – increasing overall project cost by about 12%.

We do not believe that new GST structure will offer any advantage to the domestic manufacturer as a cost of solar equipment like modules, inverters, batteries, cables, structures are already high as compare to the price available in the international market. The current GST rate is not going to benefit solar integrator or manufacturer or end consumer. As per GST Act, GST is not applicable to consumption or sale of electricity. GST is applicable on purchase of capital goods sources for producing electricity. GST paid on procurement would continue non – ITC (input tax credit) for the energy sector.

Impact of GST on Solar Tariff

In the current excise and customs laws, the import and sale of solar equipment are exempted from state and central taxes. Further, in most of the states, there is either no VAT on sale or concessional VAT on solar equipment like Balance of System (BOS) mounting structure, inverters, transformers. The benefits under existing tax laws for solar or renewable energy are expected to take away and almost every solar equipment is taxable now under the GST regime.

Below, we have calculated solar tariffs under the current tax regime and the example has been taken, keeping in mind one Megawatt (MW) solar plant. 85% of total investment in a solar plant comprises capital assets. Since GST is applicable to the solar plant and its equipment, it will impact the project cost.

In the recent meeting, the GST Council has published four different GST rates applicable to solar products. There is confusion going on about what GST rate would be applicable to different components of solar plants. These components are currently exempted, whether full GST rate will be applicable on output supply or they will get some amount of input tax credit like another taxable item (as declared 60% input tax credit of GST Rate as on 01-07-2017).

Hence, in our opinion unlike other taxable goods solar and associated product will not get any input tax credit on the assumption basis as finalized at 60% for taxable goods purchased during the old laws.

As per the data published by CERC, the power generation cost has been decreased from INR 8.5 Cr. per MW in 2012-13 to R.s. 5.3 Cr. million per MW in 2016-17 due to a significant reduction in the cost of modules, mounting structure, civil works, power conditioning unit, evacuation cost. We expect that trend will continue for the next 12-24 months. This will reduce the need for the working capital requirement. Further, it is expected that solar companies will need more working capital approx. 45 to 50 Lac per Megawatt to be compliant with GST Laws.

Indian solar developers dependent on import as per data of CERC, around 95% of total modules requirement has been imported. India has installed 1.2GW for solar cells and 5.6 GW for solar modules. However, with the introduction of GST, the domestic player will able to avail benefit from the elimination of the cascading effect of different taxes across the entire value chain of manufacturing, production of solar modules. Also under GST regime, the domestic player will able to input tax claim on the input of each stage value addition due to the input tax credit, available at a stage of supply of goods under GST regime. Hence this will enable domestic manufacturers to compete with imported modules.

With the implementation of GST, we believe that the domestic manufacturer will be able to offer a benefit generated by eliminating cascading taxes under the current regime. This will reduce the cost of BOS equipment used in solar power like inverters, transformer, cables. BOS Equipment constitutes 22% of total project cost.

As per finance bill 2016, existing depreciation on the solar plan has been dropped to 40% from existing 80% in effect on 01/04/2017. The accelerated depreciation benefit expected to be increased under GST regime to INR 0.59 per KWH from existing from INR 0.54 per KWH in the current tax regime.

Under the current tax laws, both service tax and vat are applicable, hence under GST for on work contract, only one tax is applicable. This creates more job opportunities in India.

The central and state government has been promoting the renewable energy sector. We can review the existing government policies and initiatives. Current tax incentive plays a vital role to ensure renewal energy completive and are cost effective.

Under the model GST laws, this will not only increase the cost of production for setting up a solar or renewal energy plan, but it will also increase the need for working capital.

The renewal energy sector has been contributing to the socio-economic development and creating employment in the rural area.

We believe that government should continue with existing benefits at least for SME. The following recommendations may be taken into account:

As we know that GST is implemented from 1st July 2017, at the same time there has been no information from MNRE about who will bear the increased cost of production due to GST in the case of a government project. For the time being, it has forced small solar developers not to participate in ongoing bidding process and tenders due to the huge uncertainty with the law. Some small solar developers have opted out of participating in ongoing bidding processes and tenders.

The Ministry of New and Renewable Energy (MNRE), SECI and other renewable development organizations of the government may increase the output price.  Also, the government has not made clear whether the existing project should remain in negative list or if we have to wait, as nothing has been declared by the government.

We should know that the tax on electricity is levied under Entry 53 and under this entry of the Constitution of India has been exempted/ excluded from levy under Entry 54. It may be assumed that for clarifying the impact of GST on solar, it has assumed that the same dispensation would continue under GST model law.

Impact of GST on Tour and Travel In...

The Indian tour and travel industry which is valued at around 22 billion dollars in the year 20...

The indirect tax department wants Indian conglomerates and foreign banks to put a valuation on...

Impact of GST on NGO

After the implementation of GST for NGO, the two taxes which have been combined are, tax on goo...