Applicability and Effects of GST on NBFCs in India 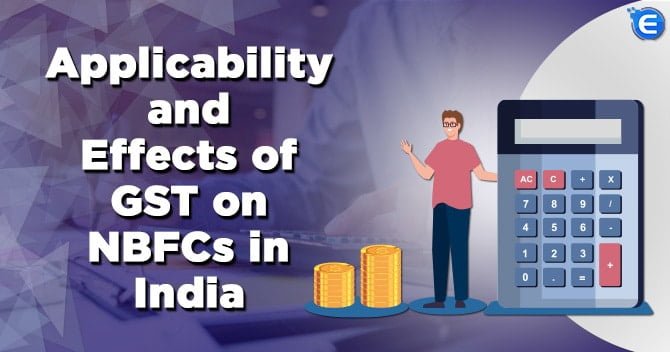 The advent of Goods and Services Tax or GST has been a monumental milestone in the history of the tax regime in India. With GST replacing the old indirect tax model that was applicable in the country, a more comprehensive and uniform system has been placed for businesses, allowing them to manage their tax liability more efficiently. The enactment of GST regime in India has also changed the way businesses function, and Non-Banking Financial Companies have been similarly affected due to the multiple changes GST has made to the tax liability on financial services. This blog lays down a detailed analysis of the applicability of GST on NBFCs in India, the benefits of GST implementation and the challenges it has posed for NBFCs.

GST – Goods and Services Tax is the new indirect tax which was introduced on July 1, 2017. GST is a destination-based tax, which consolidated the various indirect taxes that were previously implemented in India. GST is levied on every step of the sale of goods or extension of services, requiring each liable business to obtain a GST Registration and file their monthly, quarterly, and annual GST returns.

Under GST, the tax is compartmentalised as a Central GST – CGST, State GST – SGST or Union Territory – UTGST and Integrated GST- IGST. The tax is imposed at rates of 0%, 5%, 12%, 18% and 28% on different goods and services. The implementation of GST has led to various tax and cost advantages not only for the consumers, but also the sellers, producers, and service providers. The advantages of GST in India can be summarised in the following points:

Effects of GST on NBFCs in India

The GST regime has brought an array of changes to the tax liability of NBFCs in India. Previously, under the multiple indirect tax system, lending services extended by Non-Banking Financial Companies (NBFCs) were primarily exempted from indirect taxes.

Centralised Service Tax was levied, only to a certain level without taking into consideration the place where the services were extended from. However, the change in indirect tax regime introduced new provisions for NBFCs regarding the GST rates, registration, Input Tax Credit and place of supply of services. In brief, the changes in GST on NBFCs in India are:

Applicability of GST on Loans in India

As per the definition of goods and services under Section 2 of the CGST Act, money or money transactions are excluded from the ambit of GST. Therefore, loan transactions performed by NBFCs and banks are also not subject to GST in India. The same has also been exempted in the form of money to money transactions under Entry 8 the Schedule of GST rates listed by the Indian GST Council. It states that the following services will not have any GST implication:

This also means that any interest charged on loan transactions by a NBFC is not subject to GST. Clause 2(zk) of Notification No. 12/2017 Central Tax (Rate) dated June 28, 2017, defines ‘interest’ as any amount which is payable in respect of any amount borrowed or debt incurred (including a deposit, claim or other similar right or obligation) but does not include any service fee or other charge in respect of the money borrowed or debt incurred or in respect of any credit facility which has not been utilised.

However, there are certain incomes received by a NBFC that is subject to GST in India. A list of exempted and chargeable incomes under GST which are earned by NBFCs are:

Input Tax Credit or ITC has been defined as the credit a business can claim on the tax required to be paid on any purchase it makes and the same can be used to reduce the tax liability the business incurs on the sales it makes during a certain period.

There are certain mandatory conditions which must be satisfied by a person who holds GST registration in order to claim Input Tax Credit. These include:

Under the pre-GST era, the Input Tax Credit option to Non-Banking Financial Companies was available at a 50% only on inputs and inputs services. For Capital goods, the option available to NBFCs was to avail 100% credit of excise duties paid against their liability to pay service tax.

Under the new regime, Input tax credit for inward supplies can be availed by a NBFC at a fixed rate of 50% of all the credits on inputs, capital goods and input services that are eligible under the GST provisions.

Additionally, a NBFC which is engaged in supply of services in form of providing loans or accepting deposits is not eligible to avail Input Tax Credit on any inputs or input services which have not been used for its business purposes. This means that ITC cannot be claimed for ineligible inputs such as GST paid by the NBFC on food, beverages, travelling, etc.

There are two methods in which a NBFC can claim Input Tax Credit (ITC) under the GST system in India:

Section 17(2) of the CGST Act states that when the NBFC uses any inputs, input supplies or capital goods which are partly taxable supplies (including zero-rated supplies) and partly the supplies which are exempted under the CGST Act or IGST Act, the amount of Input Tax Credit which can be claimed by a Non-Banking Financial Company would be limited to the input tax which is attributable only to the taxable supplies including zero-rated supplies.

Under the 50% ITC method, a Non-Banking Financial Company can claim Input Tax Credit on its inputs, inputs services or capital goods at a fixed rate of 50% on all of its credit, and the rest of the input tax credit would lapse. This method does not take into consideration the fact whether or not the inputs were used for the purpose of taxable supplies. Section 17(4) further states that once the option is exercised, the same cannot be withdrawn during the same financial year.

Which ITC Method is more suitable for NBFCs?

When the two methods of Input Tax Credit available are compared, the 50% Input Tax Credit Method under Section 17(4) is found to be most suitable for Non-Banking Financial Companies since it allows them to claim a flat 50% input credit instead of a limited Input Tax Credit which is attributable only to its taxable supplies including zero-rated supplies. The 50% ITC method is also suitable for NBFCs that operate on a wider scale and process large volumes of transactions every day. A flat rate for claiming Input Tax Credit reduces the complexities for a NBFC that come with calculation of bulk transactions related to a loan lifecycle.

Benefits of GST Applicability on NBFCs in India

After understanding the different effects of GST on NBFCs in India, it can be perceived that GST has both benefitted and challenged the functioning of NBFCs in India. The various benefits of GST application on Non-Banking Financial Companies are as follows:

Also, Read: Changes in Utilization of Input Tax Credit under the GST Act.

Challenges Posed by GST Before NBFCs in India

While the impact of GST on NBFCs in India has led to numerous benefits for financial companies, there are also certain challenges which have been posed before them. These challenges include:

The implementation of Goods and Services Tax has had a mixed impact on Non-Banking Financial Companies (NBFCs) in India. The GST regime has substantially affected the manner in which NBFCs operate, the manner of loan transactions, the way they calculate their tax liability, file tax returns, and the Information Technology framework they put in place to manage their tax compliance requirements.

The applicability of GST on NBFCs in India has brought multiple benefits as well as challenges for the lending sector, however, a truly beneficial GST regime that makes tax compliance easier for such financial businesses, is yet to be achieved. With the government bolstering the NBFC sector and moving towards financial inclusion, it will not be wrong to expect more changes in the GST applicability on NBFCs in the future that would reduce the tax burdens of Non-Banking Financial Companies in India.

Read, Also: Impact of GST on Banks and NBFCs.

She holds extensive experience in content development and research in the finance, economics, legal and business domain. A stickler for detail, she curates her content putting her financial and legal acumen to use and conducting a detailed analysis of latest economics, business and financial trends.

GST Returns to be Filed by Differen...

If you have done GST Registration in India for your business and not so sure about compliance r...

No E-Way Bill Generation in case of...

The Central Board of Indirect Taxes and Customs (CBIC) has issued new guidelines in a recent no...