CBIC clarifies the Scope of ‘Intermediary’ under GST 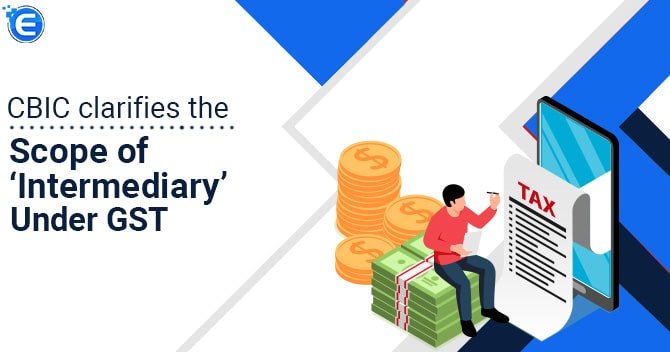 The Central Board of Indirect Taxes and Customs (CBIC) released Circular No. 159/15/2021-GST on September 20, 2021, to clarify scope of intermediary services under the GST regime. This circular is the first step towards resolving the problems that trade and industry are encountering due to differing interpretations of the issue by tax officers.

According to the circular, there have to be certain pre-requisite conditions that must be met before any service can be classified as “intermediary services.” In this blog, we throw light on these conditions as laid down in the circular.

Clarifications by CBIC on the scope of ‘Intermediary’ services

Due to the ambiguity of the GST law’s interpretation and coverage of ‘intermediary services’, the CBIC[1] has established certain pre-requisites and guiding principles to determine whether a service qualifies as ‘intermediary’ or not. Below is the list of pre-requisites as specified by CBIC:

Each of these conditions is discussed in detail in the below paragraphs:

The definition of ‘intermediary’ clarifies that an arrangement must have a minimum of three parties, i.e., two parties transacting in the supply of goods, services, or securities (main supply) and one party arranging or facilitating such main supply (ancillary supply).

The party that mediates or facilitates the primary supply of goods or services will be the intermediary. The CBIC clarifies that he does not perform the main supply on his own. As a result, his service is also known as ancillary supply.

Therefore, it can be said that an arrangement involving only two parties is not considered to be an ‘intermediary service.’

In the transaction, there must be at least two distinct supplies. While the primary supply occurs between the two principals, the intermediary provides an ancillary supply in the form of the facilitation of goods or services.

3. Character of agent or broker or similar person in the definition and supply on own account

The intermediary must assume the role of an agent or broker. An intermediary is defined by the IGST law as an agent, broker, or any other person who arranges or facilitates supply of goods or services between two or more parties. It excludes goods and services, as well as securities sold on the person’s own account.

What is meant by ‘intermediary’?

The term ‘intermediary’ is defined in section 2 – sub-section (13) of the Integrated Goods and Services Tax Act, 2017, and is replicated below for your understanding.

The section of the definition dealing with the character of the intermediary service provider is not inclusive, but instead uses the expression ‘means’ rather than expanding the definition by using the words ‘and includes’.

As a result, the phrase “arranges or facilitates” denotes a secondary or supporting role played by an intermediary, implying that they do not supply the primary supply on their own. This implies that the service of intermediary is only supportive.

A subcontractor, to whom the supply may be entirely or partially outsourced, does not arrange or facilitate the main supply between the primary supplier and their customers, and hence does not qualify as an ‘intermediary’ in GST. Hence, sub-contracting is not considered as an intermediary service in GST.

5. Other aspects which are clarified by CBIC in the Circular

The particular clause on the place of supply of “intermediary services” under section 13 of the Integrated Goods & Services Tax Act, 2017 (IGST Act) would only be applicable when the supplier or the recipient of intermediary services is located outside of India.

The government, thus, has clarified that services outsourced to India or performed in India for foreign entities will not be considered intermediary services, and thus will not be subject to the 18 % goods and services tax (GST), which is seen as a huge relief for India’s $180 billion technology sector.

The circular also provides a few examples to show that services that are in the form of ancillary supplies such as arranging or facilitating the provision of the main supply of goods & services would be considered as ‘intermediary’ services, but it does not cover services outsourced to a third party, such as outsourcing software development services or outsourcing customer service to a BPO firm.

It has also been clarified that these illustrations given in the Circular are demonstrative and generic in nature, and should not be construed to imply that the service categories or industries mentioned are inherently intermediary or otherwise. To determine the same, the specific facts of the case and the particular terms of the contract should be examined individually.

The likely impact of the clarifications about intermediary services

Back-office service providers, or business process outsourcing (BPO) entities, were being treated as intermediaries by tax authorities, denying the export status of their services to overseas entities. Exports are zero-rated under GST and are not subject to the tax, whereas intermediaries are subject to an 18% charge.

More than 200 companies are involved in legal challenges over the definition of “intermediary” services. The circular specifies the conditions that must be met in order for a service to qualify as intermediary service.

Taking into consideration the pre-requisites as laid down in the Circular, it can be construed that back-office services would be considered exports and not intermediary services.

These principles are expected to resolve pending litigations and also the ambiguity created by conflicting advance rulings.

The revenue authorities have also accepted that the GST law’s definition of intermediary is comparable to the definition given under the service tax law and that the jurisprudence put in place in the service tax context would be useful and can be leveraged by the industry.

In fact, it is the second GST Circular on the subject, the first of which was issued in December 2018. The term “intermediary” was adapted from the previous Service Tax legislation. Except for one point, there is little difference in this definition between the GST and Service Tax laws. As defined by the GST law, the supply of securities is also a part of the intermediary.

According to the circular, an intermediary is a person or entity who arranges or facilitates supply of goods, services, or securities between two or more parties. As a result, an intermediary arrangement must include at least three parties. The intermediary arrangement must also include two distinct supplies, one provided by the two contracting entities (main supply) and one provided by the intermediary (ancillary supply). An intermediary service provider must have the persona of an agent, broker, or something similar. Furthermore, anyone supplying goods, services, or both, or securities on his own behalf is not an intermediary. Even sub-contracting for a service would not be deemed as intermediary service. This clarification will free up a large amount of money that has been held up in tax refunds by GST authorities for entities engaged in ITES, R&D, financial, and counting services, as well as benefit the BPO sector, which operates on a very thin margin in a highly competitive business environment.

Read our article:Is blocking of ITC by the GST Department legal – Rule 86A?

All about the Amendments in Custom...

India’s Finance Minister presented the Budget for the Financial Year 2021 – 22 in the Lok S...

Offences And Punishments Under New...

Overview The Ministry of transport and highways recently notified about the changes in the exis...