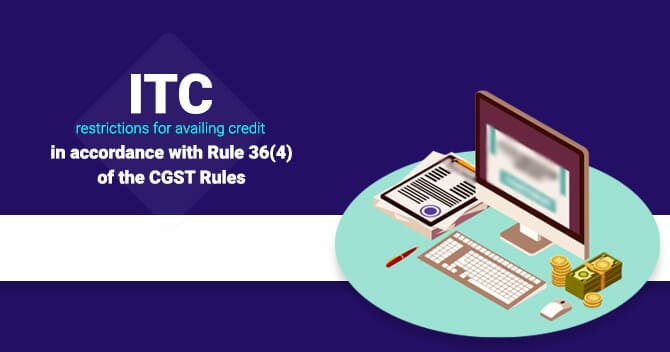 To overcome the malpractices of fake generation of invoices and fraudulent availment of the input tax credit by the taxpayers, an amendment was made in the CGST Rules. On 9th October 2019, the CBIC had inserted a sub-rule (4) to Rule 36 of the CGST Rules, 2017 to impose ITC restrictions on the claim of provisional credit. In the 38th GST Council Meeting Decisions held on 18th December 2019, the GST Council took further decisions with regard to limits on availment of provisional ITC in GSTR-3B. Such amount of provisional ITC has been further restricted to 10%* with effect from 01-01-2020 (*earlier 20%) in respect of invoices or debit notes which fail to reflect in GSTR-2A of the recipient.

Under the present GST return filing system, full ITC claim shall not be allowed to the taxpayers if their corresponding suppliers have not uploaded the details of outward supplies to be reflected as inputs in GSTR-2A. For those non-reconciled invoices, a registered person who files GSTR-3B is allowed to avail provisional ITC only to the extent of 10% of the eligible ITC allowable in GSTR-2A. The eligible ITC is such which is available on business invoices or debit notes, successfully uploaded by the suppliers in their GSTR-1, which gets reflected in the taxpayer’s GSTR-2A.

The balance ITC of Rs. 1,01,000 may be claimed proportionately in the succeeding months as and when invoices are uploaded by suppliers. For example, the eligible ITC pertaining to invoices uploaded by suppliers in the month of February 2020 amounts to Rs. 97,000. In this case, the total ITC allowed to be claimed in GSTR-3B in the month of February 2020 shall be:

However, the taxpayer may claim balance ITC of Rs. 1,01,000 even if his suppliers upload the details of balance invoices to the extent of Rs. 92,000 ITC.

Impact of ITC restrictions on taxpayers

Prior to the imposition of ITC restrictions, the taxpayers used to claim full ITC while filing their GSTR-3B (as provisional credit), even though GSTR-2A reflected a lesser amount of ITC than the books of account. Now, to compulsorily reconcile the ITC claim with GSTR-2A’s eligible credit, the provisional credit is restricted to the extent of only 10% of the eligible credit value for a particular tax period. Therefore, this new rule may affect the working capital position of the taxpayer since he shall be required to pay the balance GST liability (net of credit availed) in cash, despite holding invoices for eligible input purchases made by him from suppliers during the tax period. Also, the reconciliation exercise will be a cumbersome and time-consuming activity.

With the implementation of ITC restrictions under Rule 36(4), a lot of confusion rippled in the minds of taxpayers concerning its practical implications. It is hopeful that the new GST return filing system, after becoming operational, shall address the issues of ITC availment in a systematic manner.

Also, Read: Overview of GST on Advertisement Services and its Taxability.

What are the exemptions under GST?...

Non-application of GST is called GST exemption. The exemptions under GST is granted in 3 cases:...

On account of difficulties being faced by taxpayers in furnishing the annual returns in Form GS...

GST Advantages for Businesses in te...

CSR (Corporate Social Responsibility) pertains to a company’s voluntary contribution to a bet...