Impact of GST on Banks and NBFCs 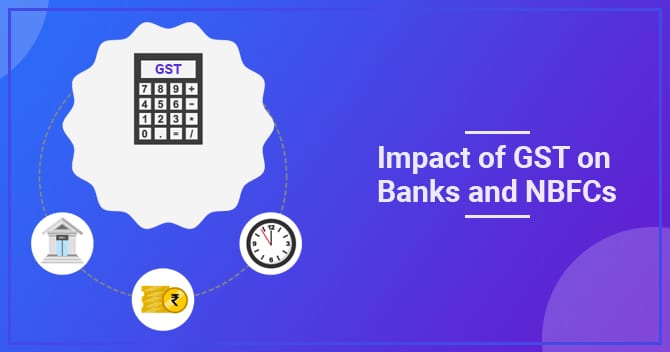 In India, several talks and discussions on “GST Implementation” began back form the year 2000. And finally, after 16 long years, i.e., on 08.08.2016, we saw the enforcement of “GST Bill.” GST is the acronym form for the Goods and Services Tax. It is a tax imposed by the Government in a move to supersede all of the other Indirect Taxes. Further, the principal and foremost reason behind the implementation of GST was to improve and enhance the country’s economy. Moreover, among all the several initiatives which could augment India’s GDP (Gross Domestic Product), GST implementation alone contributed a two percent raise.

Although the introduction of GST in India has led to a substantial shift from the current tax regime, it is expected that the Service Sector will be tremendously stressed rather than the Manufacturing and Trading sector. It is noteworthy to take into note that the Service Sector accounts for around 53 percent of India’s GVA (Gross Value Added), and among all the other Service Sectors, Financial Services acts as one of the Key Contributors.

As, if we take into consideration the nature and the volume of work done by the Banks and NBFCs, like the hire purchase, lease transaction, operations related to actionable claims, fund and non-fund based services, it is crystal clear that this implementation will have a huge impact on both the businesses and the borrowers across the spectrum.

Moreover, several developed economies like Canada, Singapore,New Zealand, Australia, etc., have largely relieved the Financial Services sector from the applicability of GST. However,the same has not been excluded in India. Hence, the introduction of GST in this sector will be a tough task for the government.

In this learning blog, we would be having an in-depth discussion about the various impacts and challenges posed by the GST on banks and NBFCs.

In India, the introduction of the Goods and Services Tax or GST, evidences indisputably, the most significant fiscal change since Independence. Due to the GST implementation, several indirect taxes like VAT, Service Tax, etc. were subsumed and swapped by a Comprehensive Tax, apparently uniformly across the nation, and also led to a change in business dynamics.

Furthermore, the Input Tax Credit (ITC) is paid at each stage and will be available in the following stage of value addition that makes Goods and Service Tax (GST) essentially a tax imposed only on the value addition on each stage. Because of this, the consumer will bear only the tax imposed by the last dealer in the supply chain and the benefits available at the preceding stages.

NBFC is the abbreviated form for the (Non-Banking Financial Corporation). It is a company that is incorporated under the provisions of the Companies Act, 2013, and is engaged in business activities like offering Loans and Advances and acquisition of stocks, equities, debt,etc., issued either by the government or by any local authority. Further, as per section 45-I (c) of the Reserve Bank of India (RBI) Act, any Non–Banking Company carrying out the business activities of a financial institution will be considered as an NBFC under this act. Hence, this business structure is governed and administered by both the MCA (Ministry of Corporate Affairs) and the RBI (Reserve Bank of India).

What are the Services provided by the Banks and NBFCs?

The services provided by the Banks and the NBFCs can be classified into two groups, and the same are listed below:

Owing to the nature and volume of financial services provided by banks and NBFC’s it is very difficult to implement the GST compliance in these sectors.

The Issues faced by the Banks and NBFC with the Introduction of GST:

Throughout the previous Indirect Tax mechanism, i.e., VAT (Value Added Tax) and Service Tax, the lending services facilitated and offered by the NBFCs (Non-Banking Financial Institution) were largely exempted from the ambit of indirect taxes. However, it shall be pertinent to take into consideration that there were only a few and limited services on which the Centralized Service Tax was imposed, regardless of the place from where these services were rendered in India.

But the same has been changed with the implementation of the GST regime in India. NBFCs are now obligated to get their business registered in every state where they are offering these taxable. As a result, due to the multiple registrations, there has been a significant and noteworthy rise in the number of both Compliance and Filing of GST Returns for an NBFC. Moreover, different compliance also need a high amount of Documentation and Invoicing of Transactions in order to raise evidence for its tax liability.

Further, the table listed below discusses in detail about the issues faced by banks and NBFCs after the Implementation of GST regime in India:

After the implementation of the GST regime in India, it was anticipated and projected that it could transform the Indian economy by allowing small-level businesses and big corporations to augment their overall efficiencies and productivity. Further, a cohesive domestic market will create far better and bigger opportunities for the businesses regarding their ability to expand and grow anywhere in the country. Moreover, it will also provide benefits like lower production costs, which will boost and enhance their profitability in the long run.

However, on the side,the financial sectors may face challenges in transacting business, managing customers profile, managing the IT system to operate and capture data which will involve complex compliance and procedures at a higher volume. Hence, the impact of GST on Banks and NBFCs (Non-Banking Financial Institutions) will be such that the transactions, compliance, operations, and accounting will be required to be reconsidered and evaluated in its whole.

Composition scheme under GST is an alternative method of levying tax on the supplies of small t...

Simplified and New GST Returns from...

­To facilitate filing of returns by registered taxpayers under GST, the GST Council in its 31s...

An announcement was made by the CBDT Indian Government for small taxpayers for the simplificati...