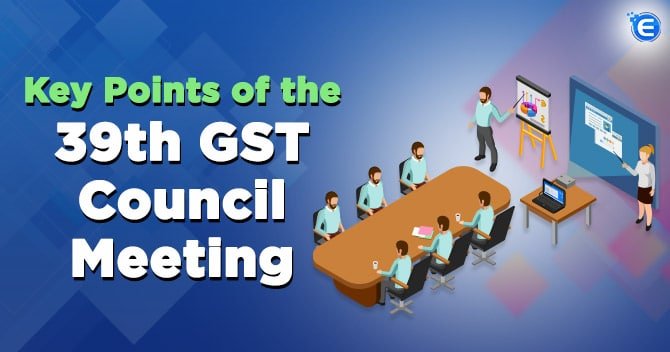 The 39th GST (Goods and Service Tax) Council meeting was held on this Saturday, i.e. 14th March 2020 at the Vigyan Bhawan, New Delhi. The meeting was chaired by our Hon’ble Union Finance Minister Mrs. Nirmala Sitharaman. Further, this meeting was attended by the Minister of State for Finance and Corporate Affairs, Mr Anurag Thakur, various other Tax Practitioners, Finance Ministers of States and Union Territories and senior-level officers of Ministry of Finance. Also, Mr Nandan Nilekani on behalf of Infosys attended this meeting. This article describes the key Points of the 39th GST Council Meeting.

Further, both tax practitioners and taxpayers had high hopes from the 39th GST Council meeting as this meeting had taken place in the middle of the economic recession caused because of COVID-19 outbreak.

The Coronavirus has now developed into a global epidemic that has adversely affected the world economy. Moreover, this meeting was conducted just two weeks before the due date for the Income Tax Return Filing of the FY 2018-2019 and the implementation of New GST Return system.

Due to such situation, there were high expectations from the 39th GST Council Meeting that it shall bring some favourable decisions to deal with the slumping economy by way of certain GST reforms. Moreover, the expectations were also high about giving a boost to the manufacturing sector. Lastly, in this blog, we will be dealing in details about the various recommendations and key decisions taken by the GST Council in its 39th GST Council Meeting.

The Union Finance Minister, Mrs Nirmala Sitharaman in her budget speech had declared that the interest collection would be done on the Net GST Liability and Section 50 of the CGST (Central Goods and Service Tax) Act will also be amended. However, later as per the clarification issued by the CBDT[1] (Central Board of Direct Taxes) cleared that interest collection will continue to be done on the Gross GST payment instead of Net GST Liability till any amendment is made with a prospective effect. Further, various concerns were raised by the taxpayers on this issue, on which the GST Council in its 39th meeting declared that Interest on the late GST liability would be charged on the net cash liability with effect from 1st July 2017.

The New GST Return system was scheduled to be executed from the 1st of April 2020. However, the implementation of the same has been delayed until the end of July, keeping in mind the technical inefficiencies.

GST Council GOM (Group of Ministers) Chairman on IT glitches, Mr Sushil Modi gave a comprehensive presentation on the current IT challenges faced by the Taxpayers. He has also highlighted the fact that taxpayers are still facing problem while filing their GST Returns. On this our Hon’ble Union Finance Minister Mrs. Nirmala Sitharaman asked GSTN (Goods and Service Tax Network) and Infosys to solve not only technical and compliance issues but also enhance its capacity to deal with high traffic. Further, the Finance Minister also directs the Revenue Department to revamp top management at GSTN.

Also, Mr Nandan Nilekani, Chairman of Infosys is asked by our Finance minister to be present in the next three GST Council meetings in order to update the council about the latest problems, development on the already identified glitches and the future roadmap.

On this Mr Nandan Nilekani assured that all the technical glitches and inefficiencies would be streamlined by January 2021. Further, he had also proposed the overhauling of the system with a specific step-wise roadmap. But, his proposal is subject to receiving hardware from China.

The GST Council in its 39th GST Council Meeting announced that no late fees would be levied for the late filing of GSTR 9 and GSTR 9C for Financial Year 2017-2018 and 2018-2019 for the taxpayers whose turnover is less than Rs 2 crore. This is a relief for the Tax papers as previously penalties were imposed for the delay.

In the case where registrations have been cancelled till 14 March 2020, application for the revocation of the cancellation of registration can be filled up to 30 June 2020. Moreover, the extension of the period of application will serve as a one-time measure to assist those who want to conduct business.

The Council has decided to provide relaxation to MSME (Micro Small Medium Enterprises) sector from filing the reconciliation statement for the Financial Year 2018-2019. Further, this benefit is provided to all those taxpayers who are having aggregate turnover below Rs 5 crore.

Extension of GSTR 3B and GSTR 1

The GST Council in its 39th GST Council Meeting had declared that the existing filing of GSTR-3B and GSTR-1 would continue till 30 September 2020. This happened because the implementation of the New GST Return forms was causing a lot of problems and the taxpayers were already facing difficulties in the existing GST Portal. Further, it is declared that New GST Returns system would be applicable from 1 October 2020 onwards.

Deferment of E-invoice and QR Code to 1 October 2020

Certain classes of the registered persons such as the insurance company, financial institution, banking company, non-banking financial institution, passenger transportation service, GTA, etc. are now exempted from the issuance e-invoices and capturing of dynamic QR code. Further, the dates for the implementation of e-invoicing and QR Code has further been extended to 1 October 2020

Amendments made to the CGST Rules

Following are the Key Amendments made to the CGST Rules –

The GST Council had given approval for the “Know your Supplier” scheme. By way of this scheme, an MSME could easily get an overview concerning the Potential supplier, so that loss of the Input Tax credit (ITC) could be avoided.

In the 39th GST Council Meeting, GST Council took a variety of decisions, starting from an increase in the GST rates concerning mobile phones to the decision regarding the extension of due date for Income Tax Return filing in the form GSTR-9 and GSTR-9C for the FY 2018-19. In the same meeting where at one point GST Council has given approval for the Know Your Supplier Scheme, whereas, on the other hand, it has further extended the time limit for the finalization of the e-wallet scheme for the consumers. Moreover, the Council had also reviewed the functioning of GSTN and asked Infosys to solve all the technical glitches by July 2020.

Offences and Prosecution under Pre-...

Before GST, the tax was calculated differentially on sales tax, customs act, excise tax and ser...

All you need to know about Form GST...

Uniform GST Rate for Lotteries at 2...

Lotteries will now attract a uniform Goods and Services Tax (GST) from 1st March at 28 percent...