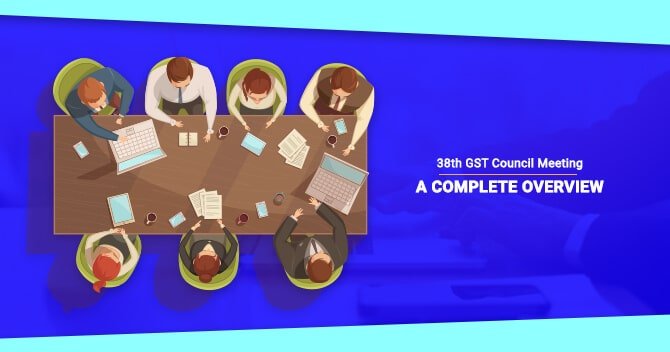 Amid the expectations of an increase in goods and service tax (GST) rates and slabs to meet the revenue shortfall, Hon’ble Union Finance Minister Nirmala Sitharaman chaired the 38th GST Council Meeting, held on 18th December 2019. The meeting covered a wide range of issues such as measures for encouraging voluntary compliance, expanding the tax base, measures to improve return filing and tax collection and rate rationalization etc. Before concluding the meeting, the GST council also considered the presentation made by the committee of officers of State and Centre on revenue augmentation.

The detailed explanation of the outcomes of the GST Council Meeting:

Grievance Redressal Committees (GRC) shall be commissioned at Zonal/ State level to address grievances of taxpayers at the Zonal/State level. The committee will include both CGST and SGST officers along with the representatives of trade and industry and other GST stakeholders.

GSTR-9 and GSTR-9C due date extended

The due date for annual return in GSTR-9 and reconciliation statement in GSTR-9C has been extended to 31st January 2020 for FY 2017-18. Earlier the last date was 31st December 2019. This extension of the due date will give taxpayers some more time to use the offline tool of GSTR-9C, which is expected to be made available on 21st December 2019.

A waiver of the late fee will be given if GSTR1 for tax period between July 2017 to November 2019 is filed by 10th January 2020. If a taxpayer does not file their GSTR-1 for two tax periods, E-way bill generation for such taxpayers shall be blocked.

GST council has decided to restrict the provisional Input Tax Credit (ITC) availed by a taxpayer to 10% if invoices or debit notes are not reflected in GSTR-2A. Before the GST Council Meeting, the restriction was set to 20%.

The last date of filing GST returns for the month of November 2019 has been extended for few North- Eastern States.

GST Council decided to issue a Standard Operating Procedure for tax officers. This shall help the tax officers to take action in cases of non-filing of GSTR 3B returns.

The GST Council approved various laws and amendments in the meeting which shall be introduced in Budget 2020.

The 38th GST Council Meeting took place in a time when there is a considerable pressure on the council to boost revenues amidst a shortfall. However, the council decided not to tamper the GST rates. Increasing the GST rates may lead to inflation and prompt people to spend less.

The GST Council[1] for the first time in its history of 38 meetings decided to depart from its regular consensus-based decision making and opted for voting to determine the taxation of lotteries. Apart from changing the GST rates on State-run and State-authorized lotteries government refrained from rate increase and removal of exemptions.

Press Release after 38th meeting of the GST Council

What is GST? Goods and Service Tax (GST) is a single inclusive tax for the entire country.&nbsp...

What is the process of matching ITC...

Goods and Service Tax in India is more unique than all other countries. Dual tax administration...