Appointment of Directors under Companies Act, 2013 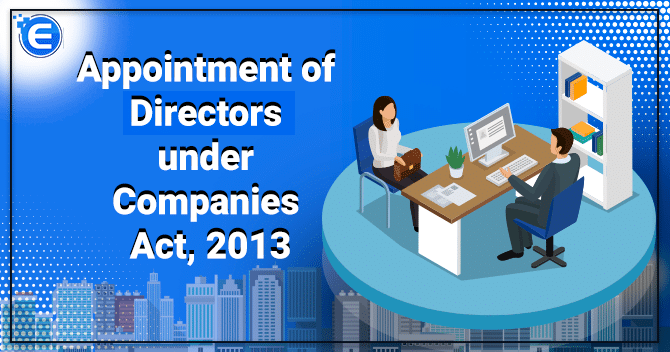 A Director may be defined as an individual who directs, controls or manages the affairs of the Company. A director is a person who is appointed to perform the duties and functions of a company in accordance with the provisions of the Company Act, 2013[1]. They are collectively known as the Board of Directors. In this article we shall discuss the aspects related to appointment of directors.

Every Company shall have a Board of Directors consisting of Individuals as director.

The Companies Act also permits the Articles to provide for the appointment of two-thirds of the Directors according to the principle of proportional representation, if so adopted by the company in question.

Nominee Directors can be appointed by a third party or by the Central Government in the case of oppression or mismanagement.

Minimum number of directors differs from company to company:

Further, every Company should have one Resident Director (i.e. a person who has lived at least 182 days in India in the previous calendar year.)

Director’s appointment is covered under section 152 of Companies Act, 2013, along with Rule 8 of the Companies (Appointment and Qualification of Directors) Rules, 2014.

Appointment of Directors: Qualifications for Directors

The Companies Act does, however, limit the specified share qualification of Directors which can be prescribed by a public company or a private company that is a subsidiary of a public company, to be five thousand rupees (Rs. 5,000/-).

Appointment of Directors: Documents for Appointment

Following documents are required for appointment of a person as Director:

This is one of the most important changes made in the new regime, particularly in respect of the appointment of Directors under section 149 of the Companies Act, 2013. It states that every Company should have at least one resident Director i.e. a person who has stayed in India for not less than 182 days in the previous calendar year.

Now the legislature has made mandatory for certain classes of the company to appoint women as director. As per section 149, prescribes for a certain class of the company their women’s strength in the board should not be less than 1/3. Such companies either listed company and any public company having-

All public or private companies may appoint additional director. However, the articles should allow for it and such person shall not fail to be selected as director in general meeting. An additional director can be appointed in board meeting or by passing resolution by circulation.

Restrictions on the number of Directorships

The Companies Act[1] prevents a Director from being a Director, at the same time, in more than fifteen (15) companies. For the purposes of establishing this maximum number of companies in which a person can be a Director, the following companies are excluded:

Failure of the Director to comply with these regulations will result in a fine of fifty thousand rupees (Rs. 50,000/-) for every company that he or she is a Director of, after the first fifteen (15) so determined.

It may be noted that as per the Companies Act of 2013, no person shall hold directorship in more than 20 companies and 10 in case of public company. In case you have any query related to appointment of directors, contact Enterslice.

Read our article: Procedure related to Shifting of Registered Office Under Companies Act, 2013

Appointment of Company Secretary as...

The Appointment of Company Secretary (CS) has been made mandatory for a few class of the c...

Process of Shifting of Registered O...

What is Shifting of Registered Office of Pvt Ltd Company? The Registered office of the company...

Background: The liberalization Scheme of India, in 1991 has reformed various aspects, operation...