Applicability of GST on Brand Names: A Complete Report 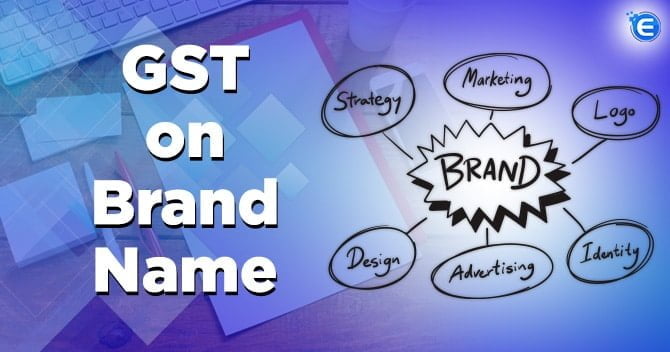 In the current scenario, the goodwill attached to the brands is an essential guiding factor for the consumers to decide on the purchase of the brand products. A brand is protected by one of the most important intellectual property rights (IPR), which is known as ‘trademark.’ Intellectual Property rights, though being in an intangible form, significantly increase the value of goods and also provide various rights and also the remedies for protecting its position in the market full of competition. If a person gets his brand name registered, he gets exclusive rights to use such brand name and file a suit for infringement of his registered trademark or brand name. This article describes the Applicability of GST on Brand Names.

Even the unregistered brand names have got certain equitable rights which can be enforced in a court like that of remedy against passing off. It also prevents misrepresentation of his goods or services. Gradually, a brand name is getting due importance in the GST regime as well. The GST regime has brought confusion regarding the difference in the rates of tax levied on the supply of branded and unbranded goods and services. It is also observed that there is no difference between branded and unbranded services, even though a brand name can be registered as a trademark.

What are the Legal Provisions of GST on Brand Names?

The provisions related to GST on brand names have been enumerated in Notification No-01/2017-Central Tax (Rate) dated 28th June 2017. Some of its elements are explained below:

Contrarily, Notification No. 02/2017- Central Tax (Rate) dated 28th June 2017, states that if the products mentioned above are not packed in a unit container nor does not have a registered brand name, these products will be exempted from tax. The exempted goods have been shown below:

Unit Container: The phrase “unit container” here means a package, either a large or small (for example, can, tin, box, bottle, jar, bag, or carton, barrel, drum, or canister that was designed to hold a fixed quantity or number, which is indicated on such package.

What is meant by Registered Brand Name?

According to the phrase, ‘registered brand name means a brand name or trade name, which can be a name or a mark such as a monogram, symbol, label, signature or any invented word or writing which is used with respect to such specified goods to indicate or to determine a connection during the course of trade between the specified goods and some individuals using the mark or name with or without indication of the identity of that individual, and which has been registered under the Trade Marks Act, 1999[1]. The brand name also means:

How to Save GST on Brand Names or a Registered Trademark?

Many small traders and companies applied for the deregistration of their brands in the Trademark Registry offices because the registered brand name was taxable under GST. For many traders/ dealers in this situation, it became very difficult to decide whether to save taxes or to preserve the rights attached to its brand name. The GST council addressed this issue by providing that the traders can get rid of paying the GST only if they opt to forego any actionable claim or their brand name by filing an affidavit. But the dilemma among the traders still continues as to weight the option of saving 5% GST or to forego its trademark rights relating to its brand name. Further, the Ministry of Commerce is also concerned that the deregistering of trademarks may lead to fake products in the market, which could create a health hazard in the industry.

By exempting the unbranded products, even those companies which have a boosting revenue but have not registered their brands get benefitted. On the other hand, the benefit can be provided on the basis of loose food items or packaged food items irrespective of the branding of such products to avoid any type of faults.

What are the Demerits of Exemption of Benefit on GST on Brand Names?

There were reports that the businesses selling branded food were deregistering their brands to get the exemption benefit by surrendering their registered brand names without giving due weightage to the value of their intellectual property rights. Hence when the GST council after the introduction of this notification met on 9th September 2017 to discuss on issues continuing after GST implementation, tax rates on around 134 products were reviewed, and some changes were made on rates with respect to GST on brand names with respect to GST on brand names (branded and unbranded products).

Moreover, as per Notification No. 34/2017-Central Tax (Rate) and 35/2017-Central Tax (Rate) dated 13th October 2017, provided the procedure for filing an affidavit where the individual having an enforceable right or an actionable claim over the registered brand name and the person undertaking packing of the goods are two different persons. It is significant to mention that even if the brand is unregistered, there remains an enforceable right/remedy in the nature of passing off right is available to a prior user of such a brand. Still, clarification on the validity of the affidavit and for opting out of the exemption by cancelling the effect of the affidavit needs to be given by the GST Council.

Can a Company or Manufacturer Name be a Brand Name under GST?

For understanding this concept, you can look at the case of Tarai Food Ltd. v. Commissioner:

In this case, the Supreme court held that the words brand name suggests a mark, design, symbol, or title, which differentiates itself from other manufacturers which, when uses a particular product would generate a connection between the product and the manufacturer. It was also pointed out that if the manufacturer’s name in every circumstance can be considered as a brand name and then there will be no such things as unbranded items. The seller’s identity cannot always be equated to a brand name. The trademark law does not prevent any person from adopting his name or surname as a trademark in connection with his trade, prima facie, such a brand should be “capable of differentiating the goods or services of the person from others having the same name or surname. A manufacturer or trader desires typically to use as a mark something associated with his name. Generally, he does not use as a trademark his full personal or business name but an inherent part of such title, an abbreviation, or just a surname. But this genuine desire or interest on his part must be reconciled with the hope or benefit of a competitor to use any identical or same personal or business name/ abbreviation/ surname. Whereas, a trade name means a name under which goods are sold by a particular person and which, by its established usage, has become known to the public as indicating that those goods are of any particular person. In fact, it is prevalent for trade names to be used as trademarks, and the law permits registration of trade names as brands. However, the basic applied test is: Whether any other businessperson will use this name. Hence, the intention should be made clear that all persons selling unbranded products are not put in any type of inconvenience because cannot be such that all such persons who sell unbranded products as they are supposed to affix their names. Looking at this, a clear difference must be established between the name of the company or manufacturer and a brand name.

It was observed in the above case that the goods bearing the name and address of the manufacturer, according to the statutory requirement could not be considered as not taking a brand name.

Reliance was placed by authority on the decision in case of Commissioner of Central Excise, Trichy vs Grasim Industries Ltd [2005 (183) E.L.T. 123 (SC)], where it was held that even the name of some other company, also if it was used to indicate a connection between the product and the company would be a sufficient clause to constitute a brand name. It was also asserted that the said decision taken by a three-member bench of the Honourable Supreme Court would have precedence over the decisions of the Honourable Supreme Court in case of Tarai Foods.

Government to impose GST on brand names and logos

Some of the foreign banks as well as Indian conglomerates are questioned by the Government for allowing their Indian entities and also subsidiaries which use their brand name for free. The indirect taxes department wants such organisations to charge a valuation on their brand names and logos and charge fees accordingly. The Government intends to charge 18% GST for such entities.

The companies under the radar are banks inclusive of Citi Bank, HSBC Bank, ICICI along with other conglomerates such as Tata Groups and Mahindra’s. The tax department had asked written inquiry to some companies and had also issued preliminary notices to some foreign established banks. The TATA group and HSBC did not reply or give their comments while other companies are also on the verge of confusion as to what should they reply.

According to financial experts, if this GST gets implemented, then the companies and foreign banks will have to pay thousands of crores in the form of tax after imposing the charges. However, the subsidiary companies may have to pay less in case it is a manufacturing unit.

The foreign banks or conglomerates needs to check the value of their logos or brands since many of them might not know its cost.

How Enterslice can help you?

Despite the public view and the existing confusion regarding branded goods, to an extent, it is clear that using a reputed brand will attract taxes. The consumer’s gains confidence regarding the product quality on the branded products. By widening the meaning of a registered brand name, the benefit of exemption cannot be granted to a various sellers who sell packaged foods who have a brand name but have not yet applied for trademark by submitting the affidavit. Moreover, many big institutions may not be willing to risk a brand by abandoning all the rights along with it to it to save 5% GST on brand names. The intention of law for providing the level playing field to all its participants in the market is very clear. However, the Government still needs to sort the additional issues connected with this point. Most importantly, all the small scale traders claiming their exemption for their products can submit the affidavit as a precautionary measure.

As you all know, GST (Goods and Services Tax) was introduced in 2017, and the classified catego...

The GST or Goods and Service Tax is a brilliant game changer; why, because of its implementatio...

Is Refund Claim Under GST for tax a...

Yes, the refund claim under GST for tax and ITC is allowed fulfilling all the requirements embe...