An agreement which governs the respective rights and liabilities of the founders of a start-up or a partnership or a LLP is known as the Founders Agreement. Such an agreement is similar to the shareholders agreement which is utilised the shareholders of the company. The amount of investment and ownership percentage is recorded in this agreement. Hence any form of shares or equity which is provided to the co-founders would also be recorded in such an agreement.

The following benefits can be achieved by drafting a founders agreement: 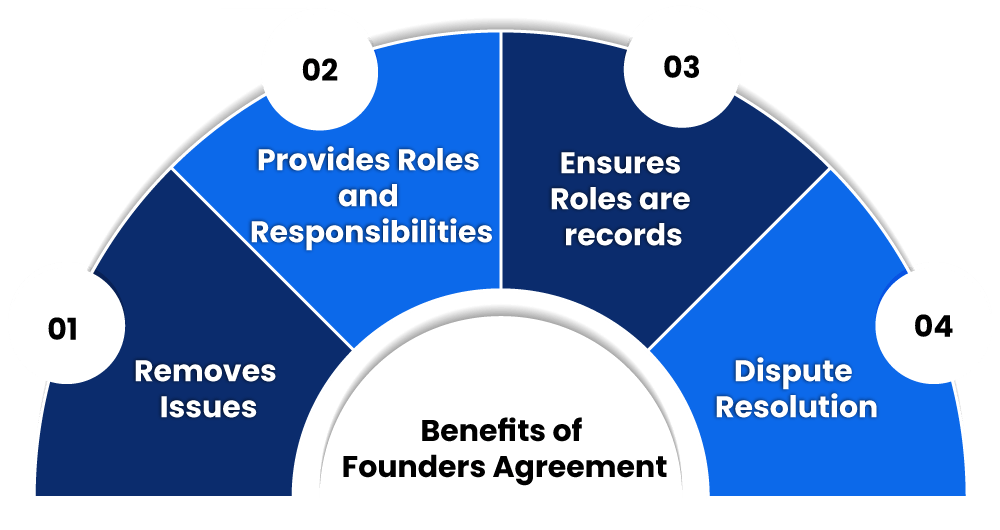 Key Terminologies or Clauses Present in a Founders Agreement

The following terminologies or clauses have to be present in a founders agreement: 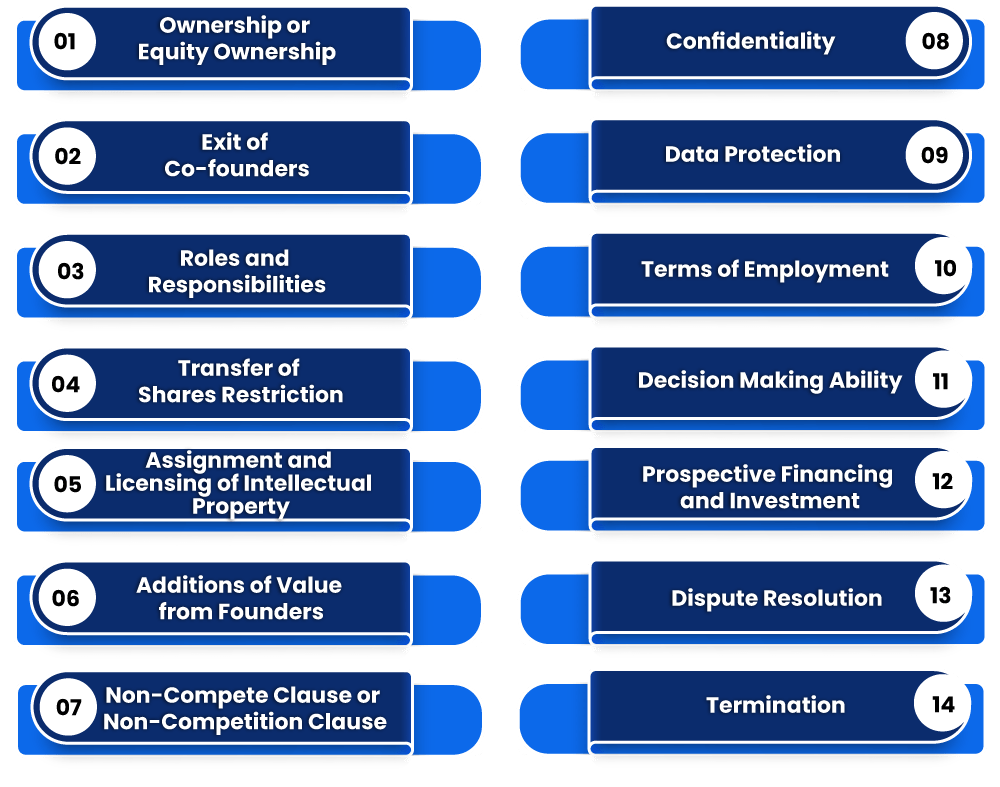 Ownership or equity ownership is one of the most important clauses present in a founders agreement. Equity ownership in the business would be dependent on number of factors such as the amount of investment in the firm, experience of the founders, intellectual property rights, know-how of information and the networking opportunities available. Some of the above would depend on the considerable experience brought out by a founder.

Another important clause or consideration in a founders agreement is the exit clause. Such clause would define the situation of the exit. An exit may be voluntarily or forced exit as a result of termination. For such a situation a formal process or procedure must be provided. Such clause is known as an exit clause or a vesting agreement which is dealt by the founders.

In the founders agreement, the roles and responsibilities should be specifically mentioned. Through this the co founders can divide their respective responsibilities as per the requirements. Different functions can be managed by different individuals through this.

There has to be a clause dealing with the restriction on the transfer of shares. Usually a lock-in clause would be present to specify the same related to the agreement. However, there can be instances where the co founder would want to exit from the business before the expiry of the lock-in clause. To ascertain this situation, the valuation clause must be provided in the agreement. If the co founder wants to exit from the agreement, then the valuation and dilution of shares must be dealt by this form of clause. The method of valuation must also be mentioned in this agreement. If the valuation is carried out by a SEBI registered merchant banker or a chartered accountant. The agreement should also state if international principles of valuation is utilised.

Assignment and Licensing of Intellectual Property-

Additions of Value from Co-founders-

In the founders agreement another important clause which has to be added is any other form of value or addition related to the intellectual property right, research and development or some form of technical know-how of the founder. Though such information is proprietary in nature, the same must be included in the founders agreement. Having such specifications would remove any doubts related to the added value of the co-founders.

The terms of employment of the separate founders have to be mentioned in the founders agreement. Apart from this, it is also crucial to have a separate employment agreement between the co-founders. The respective rights, duties, shareholding and remuneration would be dealt in this clause.

This clause has to be mentioned in the founders agreement. If any dispute arises between the co-founders then the mode of settling the same must be mentioned. This would not waste unnecessary time and expense in litigation. Dispute resolution can be carried out through arbitration, reconciliation, mediation or out of court settlement system.

How to reach Enterslice for Founders Agreement

Yes it is mandatory to get this form of agreement drafted, as it negates the possibility of getting ousted from the entity without proper exit clauses. Apart from this, the founders agreement would also have provisions related to the responsibilities of the founders.

The penalties would be based on the amount of breach and severity of breach.

The following procedure has to be considered to draft a founders agreement:

• Appoint a Lawyer to draft the agreement

• Get the agreement notarised.

A succession certificate can be defined as a certificate issued by a competent court to the legal heirs of a deceased for the purpose of establishing the a...

Issue of Succession Certificate: An Overview

One of the most common issue faced by the family members in the event of death of the actual owner of a property or assets is the distribution of the......

Liquidator Not To Get Influenced By the Findings of MERC: NCLT

The NCLT Hyderabad Bench in the case of Punjab National Bank v. Lanco Vidarbha Thermal Power Ltd (2022) has rejected the findings of the liquidator while s...

All You Need To Know About the Scope of Relinquishment Deed

In order to enable a co-owner of a property to relinquish their share of the property to another co-owner, a relinquishment deed is required. The right of...