Custom Clearance is the process which involves the documentation and procedures related to export and import of goods and services into the country. In India there are separate customs authorities that deal with the documentation and process related to customs. The Central Board of Indirect Tax and Customs (CBIC) is the main regulatory authority dealing with customs in India. This authority also deals with taxes.

Apart from the above, there are separate state and metropolitan authorities dealing with Custom clearance services in India. For example, the Delhi Customs would deal with customs procedures related to all goods and services which are brought into Delhi and sent outside Delhi. There is separate customs for Air Cargo and Freight Clearance Services.

In India there is a separate regulation that deals with Custom Clearance Services. All documentation and procedures related to customs is present under the provisions of the Customs Act, 1962. Under the customs act, 1962 the government has the authority to appoint customs officers as designated ports, airports, customs ports and other borders. This is present under section 7 of the Customs Act, 1962. Such requirements come for unloading of imported goods and loading of goods which are going to be exported. Under the act, customs officers have the powers similar to that of police departments and include confiscation of goods and making arrests.

Where are Custom Clearance Services required?

Custom clearance services are required in the following places: 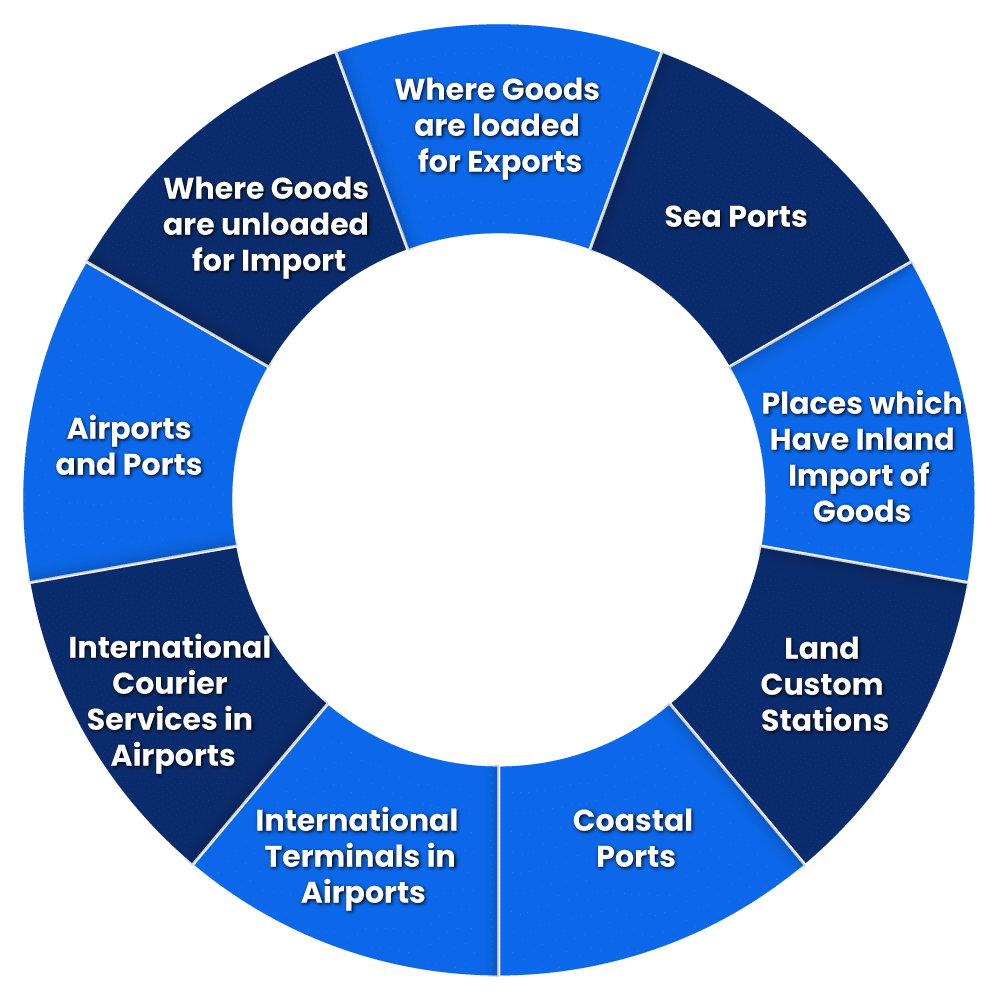 The Director General of Foreign Trade (DGFT) regulates the provisions related to export of goods and services outside India. There are different forms of consolidated policies which would be applicable to India. Currently the foreign trade policy which India is utilising is the foreign trade policy (FTP) 2015-2020. This policy gets amended every 5 years in compliance with the requirements of the rules.

When goods are exported from India, they would have to clear customs. Similarly when goods are imported into India there are different forms of custom clearance services which are required to comply with the provisions of the law related to customs.

It is necessary that all the goods entering into the country from another country, including personal effects, are cleared by the customs.

Prior to entry of goods into the country, necessary amount of custom duty has to be paid and only then the customs authorities release the goods.

The following are the types of Custom Clearance Services:

When goods and products are brought into India, there is a prescribed procedure to be followed:

The following documents are required for Custom Clearance Services:

How to reach Enterslice for Custom Clearance Services

Custom clearance services deals with the documentation relating to customs i.e. import and export of goods and services.

The main law that regulates customs in India is the Customs Act, 1962.

Yes the main authority for customs in India is the CBIC.

Customs Officers are placed in the ports, airports and inland areas near the borders to handle the customs (imports and exports of the country).

10% is levied on the goods which are imported to India.

Alcohol and Cigarettes would be charged duty if brought to India in a quantity more than the stated amount.

BCD is also known as the basic customs duty is the amount of tax calculated on the assessment value of the goods. This would be on the basis of percentage.

Setting up an import export company in the USA

If you wish to set up a company which deals in import export business then you should consider reading this article till the end. Setting up a company invo...

The Director-General of Foreign Trade (DGFT) has announced an extension of the timeline for compulsory electronic filing of Non-Preferential Certificate of...

The Director General of Foreign Trade recently notified of the date extension of mandatory filing of electronic filing of non-preferential CoO (Certificate...

Surrender IEC License: All you need to know

Out of all the different registrations required by a person while starting a business, IEC Registration is one of the essential registrations if one intend...