Will your take-home salary be declined due to the Wages Code, 2019? 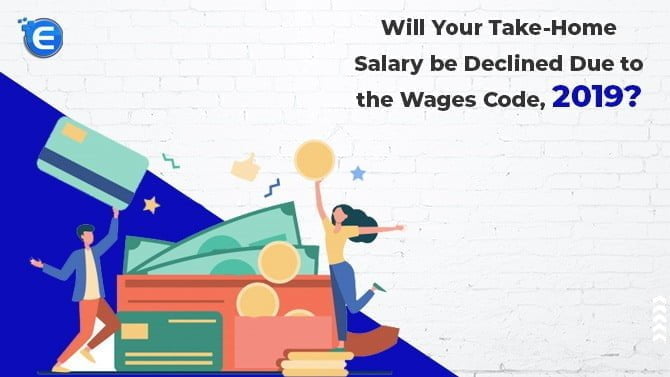 The Code on Wages has been introduced with a view to streamline and simplify the existing labour laws. The wages code is expected to kick in from the 1st of April 2021 and will directly impact the salary structure of the employees. Let’s understand this more clearly and know if your take home salary will be reduced with its implementation.

The new compensation rules that are a part of the Wages Code, 2019 provides that:

When a person works for someone else or for a company, one is then said to hold a job and is called an employee, whereas the person or the company one works for is called Employer. Money that is paid is called Salary, Income, or Wage. The salary structure may vary from company to company, but the constituents of salary are the same. Many employers structure the salary in a way that the basic pay remains low, and allowances are high.

CTC or Cost to Company is the total amount a company spends on an employee in a year.

Basic Salary is the core of salary, and many other components such as EPF and HRA are calculated based on this amount. It all depends upon the grade of a person in the company’s salary structure.  It is a fixed part of one’s compensation structure.

Allowances are fixed periodic amounts which are paid by the employer apart from salary, for meeting some requirements of the employee.

This is one of the biggest change factors in the labour code. In the extant acts, the definition of wages differed from legislation to legislation. For example, in the case of Maternity Benefit Act, Minimum Wages Act[1], Payment of Wages Act, and Payment of Bonus Act, in the wages definition house rent allowance is included but it is excluded under the Payment of Gratuity Act and the Employees Provident Fund.

In case of definition of wages under the new code, it is an inclusive definition and includes all remuneration, but it excludes certain allowances and benefits like house rent allowance, overtime allowance, statutory bonus, etc.  In case the value of exclusions goes beyond 50% of the total wages, then the excess amount shall be included in the wages.

The change in the basic wage would result in a change in contribution in Provident Fund in cases where the employer contributes towards PF on the actual basic salary instead of the minimum required contribution of 12% of 15000 rupees. A higher PF contribution would mean a lower in hand pay.

How firms would be impacted from Wages code?

Firms would be required to restructure the pay packages, and there could be significant cost repercussions for firms. As the base to calculate Provident Fund and gratuity is raised, employers would be required to increase their workforce cost. This is in addition to the one-time cost increase for employers to audit their current base of employee pay structure and align with the new system and with rising compliance burden.

Firms will also witness an impact that is the increased gratuity cost. As of now, it is calculated on 15 days of basic pay and dearness allowance. Now with the new calculation, gratuity will include the other allowances of wages like travel, special allowance.

Is there any benefit for employees?

With more sum deducted for social security and post retirement gratuity, the scheme could be beneficial for employees in the longer run however, while the new wages code is set for roll out on April, clarity is awaited on many provisions.

Read our article:A Review of the Code on Wages, 2019

Benefits of Using a Payroll Managem...

Giving 100% is the only secret recipe for any successful business process. So, the Human Resour...