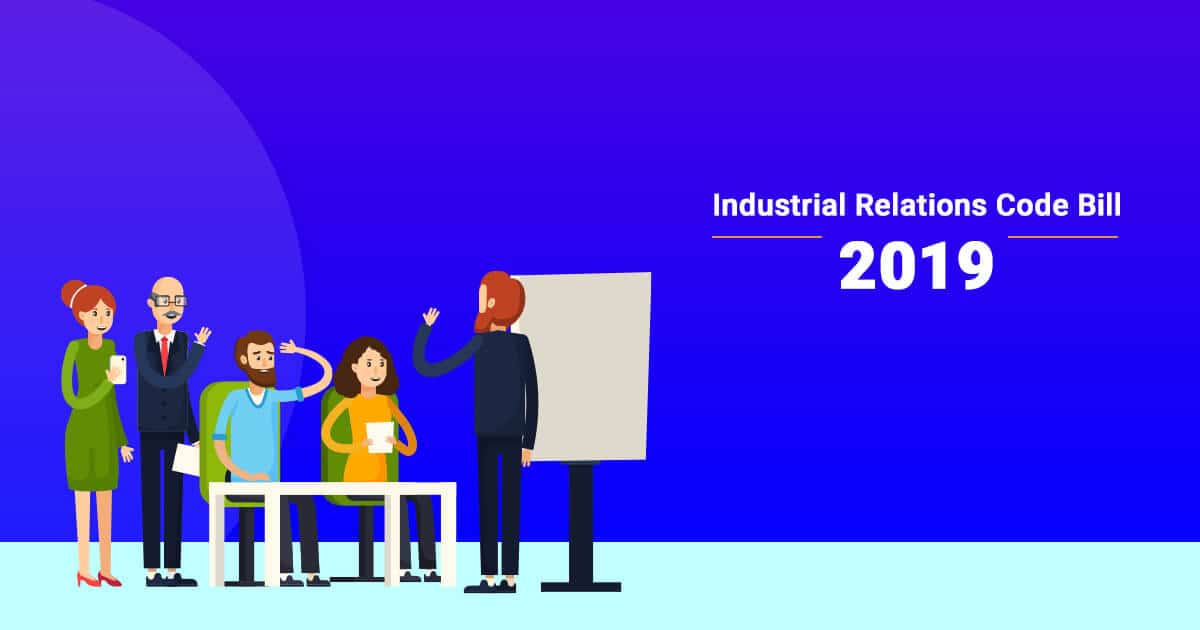 On November 28, 2019, the Ministery of Labour and Employment introduced the Industrial Relations Code, 2019, as a part of the Labour Code in Lok Sabha, which seeks to integrate the essence of three Labour laws:

The Labour Code subsumes 44 labor and industrial relation laws into four codes, one of which is the Industrial Relations Code 2019.

The introduction of the Labour Code, specifically, the Industrial  Relations Code can be attributed to the Indian economy’s growth rate in the 2nd quarter of 2019. The economy grew at 5%, which is a six-year low. While in September, India’s factory output fell for the second month straight to 4.3%. In such circumstances, it was critical and expected of the government to take measures in addressing the issues responsibly.

Negotiating Union: A union is one of the important elements in the establishment of a fair and just work environment. They are often the sole representative of the workers. However, it was often rendered ineffective due to multiple unions, compromising the identification and addressing of the actual grievance. With the implementation of the Industrial Relation Code, negotiating over workers’ grievances with the employer stand revamped. A sole trade union with the support of 70% of the workers would solve the problem and in turn, address all the grievances.

Trade union registration: Under the Industrial Relations Code Bill 2019, at least seven or more members of a trade union are eligible to apply.  Trade unions constituting least 10% of the total workers in an establishment, or at least 100 workers, any of the two which is less, would be enrolled.  Any such registered trade union should always have at least seven workers as its members, employed in the concerned establishment or the allied industry.  Only upon fulfilling the condition would a central, or state government may recognize a trade union or a federation of trade unions as Central or State Trade Unions respectively.

Intimation of change through Employers who seek to recommend changes in the conditions of service are required to give intimation to the workers via notice. The context of such change in the service is discussed in a Schedule of the Code, which roughly includes the matters related to wage, contribution, as well as leave.

Lay-off and retrenchment: The Code redefines the retrenchment of the employees by the employer as well as the lay-off as the inability of an employer to employ workers, due to shortage of coal, power, or breakdown of machinery, etc. Obtaining of the prior sanction of the Central/ State governments is required by the employers of industrial establishments constituting at least 100 workers before lay-off, retrenchment or closure.  However, the government can modify this threshold limit i.e. a number of workers by notification.

Punishment- Any person contravening the provision is punishable with a fine between one lakh rupees which can go up to 10 lakh rupees.

Compliance before Retrenchment and Lay-off- Industrial establishments in which employs 50 to 100 workers are required to:

Penal Provision- Any person who contravenes this provision of Industrial Relations Code bill 2019 is liable to pay a fine between Rs 50,000 and 2 lakh rupees. Further, the retrenched worker would have to be the preference over other persons if in case an employer proposes to re-employ in the positions vacated through retrenchment.

Disputes involving the questions of national importance, Central or State Government may also form the National Industrial Tribunals and work for the settlement.

Industrial Relations Code Bill is undoubtedly a crucial part of the government’s measures towards promoting ease of doing business in India. And along with this, the process of revamping the industrial setup encompassing the labor laws, more specifically, the laws concerning employment and dispute settlement is also executed. As a result, not only a fertile ground is prepared for the new businesses to grow at an unprecedented rate, but the shackles of unemployment which the country has been struggling with for a long while are also potentially destroyed. Therefore, to say the least, the government has set the standards very high in the spheres of proactive governance.

Employee Provident Fund is one of the most popular and promising tools for investment as well a...

Key Components of a Company’s...

It is mandatory for a company to draft and disseminate an organisational POSH Policy to be in c...

The compulsory registration for EPF/ESI for companies/organisations is required at the time of...