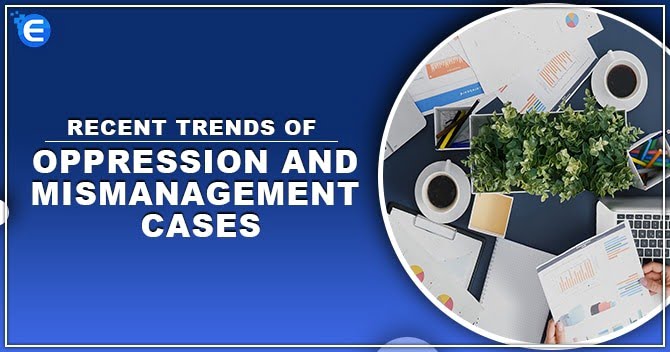 The laws governing oppression and mismanagement in corporations are an essential component of corporate governance. They guarantee that a business’s interests are protected and that no shareholder or member of the company is subjected to excessive prejudice or discrimination.

The operation of any company of any size in aspects of issued shares is based on the broad rule of corporate democracy, which states that the company makes decisions on its numerous affairs subject to the rule of majority voting, in one form or another, with votes cast by its shareholders to approve or disapprove of a particular course of action. Nevertheless, it is possible that the majority’s actions be harmful to the firm or the public interest, or is harmful or oppressive to any of its members. The rules pertaining to oppression and mismanagement are inserted in Companies Law as an exception to the majority rule in order to prevent the majority shareholders’ voting power from being misused or abused.

The wrongful use of authority or power against the permission/ consent of the other person is known as oppression. As per the Black Law Dictionary, the phrase “oppression” is described as “the act or instance of unfairly using authority”. It may also be defined as an act or occurrence of oppression, as well as the sensation of being excessively burdened, emotionally or physically, by difficulties, bad circumstances, or anxiety. Oppression is a continual process in which the majority acts in a way that is harsh and onerous to the minority.

It was decided in the case of Dale and Carrington Investment Pvt. Ltd. vs. P. K. Prathapan that raising a company’s capital only for the goal of acquiring control over might be considered oppression.

Mismanagement, on the other hand, suggests that the company’s operations are being managed in a manner that is adverse to the public interest or the company’s interests.

The interpretation of these terms, and the aim of Company law, should be interpreted broadly rather than literally. Mismanagement refers to extreme negligence. Mismanagement cannot be defined as simple corporate misconduct.

When can an application be filed against Oppression and Mismanagement?

Who can file an application against Oppression and Mismanagement?

The right may be further distinguished in a corporation based on whether the firm has a share capital or does not have a share capital. Section 244 allows the following individuals to file a claim under Section 241:-

The Tribunal, on the other hand, has the authority to waive the abovementioned numerical criterion as it deems fit. In the matter of Cyrus Investments Pvt. Ltd. & Anr. vs. Tata Sons Ltd. & Ors., the National Company Law Appellate Tribunal (“NCLAT”) established a four-step approach to assess whether the numerical requirement of Section 244 should be waived or not. NCLAT proposes the following four steps:-

As a result of the four-step examination applicable to the circumstances of the case, NCLAT granted waiver to the Appellant/Applicant, despite falling short of the 10% criterion.

Furthermore, U/S 241(2), the Central Government may submit an application to the Tribunal if it believes that the company’s affairs are being managed in a way which is detrimental to the public interest.

The tribunal is a special adjudicatory body established to deal with issues relating to the Companies Act for getting efficient and prompt remedy. Section 242 concerns with the tribunal’s powers, which have been evaluated and discussed below.

Oppression of the Minority

Although a company’s administration is established on the majority rule, however, the interests of the minority cannot be entirely ignored. When we discuss about majority and minority, we are referring to the voting strength of the majority or minority, not the numerical majority or minority. The reason for this discrepancy is that a small number of shareholders may own the majority of the shareholdings, while the majority of shareholders may own only a tiny portion of the shares. The majority may, for all intents and purposes, do anything they want with the Company once they get control, with almost no oversight or supervision, since even if they are interrogated in the company GMs about their actions, they always come out on top due to their greater voting power. As a result, current Companies Acts, 2013 include a slew of provisions aimed at safeguarding the interests of minorities in corporations.

The matter of Tata Consultancy Services Limited vs. Cyrus Investments Pvt. Ltd. & Ors. is a landmark moment in the history of oppression and mismanagement. In this matter, Mr. Cyrus Mistry was removed as a non-executive director on the board of Tata Sons by a decision of the firms’ Board of Directors. Furthermore, he was ousted from directorships in numerous Tata’s Group companies by shareholder resolutions. Following his dismissal, two businesses, Cyrus Investments Private Limited and Sterling Investment Corporation Private Limited, which had shares in the Tata Group of Companies, filed a lawsuit under Sections 241, 242, and 243, alleging prejudice, oppression, and mismanagement. Mr. Mistry held a majority stake in both of these firms.

Based on the facts and law, the NCLT determined that there was no oppression or mismanagement. On appeal, the NCLAT overturned the verdict and restored Mr. Mistry as a director of Tata Sons and a few other Tata Group entities. Several Tata Group entities filed appeals to the Supreme Court of India, which were consolidated and heard jointly. While concluding that the Tata Group’s operations do not constitute oppression, the Supreme Court of India made the following significant observations:-

Power of the Government to file complaints for Oppression and Mismanagement

Review of opinion formed by the Central Government – Section 241(2)

Even though the NCLT has broad powers as per Section 242 of the Act to make any order it sees appropriate to put an end to the complaints, its capacity to do so is limited by Sections 241, 242, and 244. Under the legislation pertaining to oppression and mismanagement, individual shareholders and minority stakeholders have been empowered to take action against the unjustifiable misuse of power and authority by managerial employees. To get orders as per Section 242, the applicant must first pass the numerical criterion u/s 244, and then satisfy the Tribunal on the conditions of Sections 241 and Section 242 – namely, oppressive or prejudicial conduct, & a just and equitable cause for the company’s winding up. These standards have fairly high thresholds because the numerical requirement may only be waived in rare instances, and a simple lack of trust between members and directors will not constitute just and equitable grounds for the winding-up of the company. The prohibitions of oppression and mismanagement, along with judicial precedents, can therefore be understood to establish a balance between the interests of a company’s majority and minority shareholders. They give a structure for setting the house in order.

Read our article:Provisions for Oppression and Mismanagement Mentioned in the Companies Act 2013