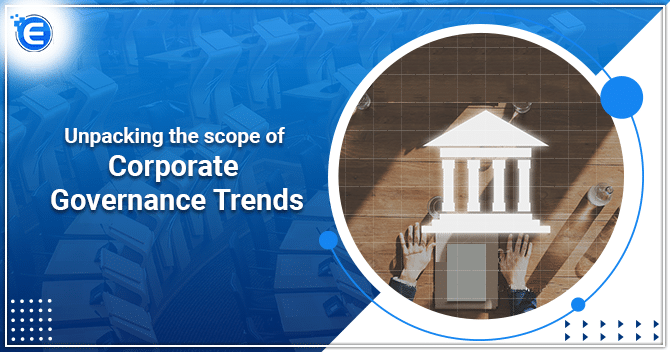 The conception of ‘corporate governance trends’ is not a goal in itself; rather is only the outset of a company’s growth for long-term profitability.

Corporate governance trends are a collection of corporate elements that includes processes, regulations, and practices that the authorities use to manage the system. It is a crucial component of the day-to-day administration of businesses that allows them to run properly. Corporate governance, just like every other policy, establishes the professional relationship between people who jointly administer the business, like stakeholders, the board of directors, management, and shareholders. Companies must evaluate and enforce their corporate governance standards on a regular basis. This system is in place to govern the company’s employees’ obligations and rights. It contributes to ensuring that a company operates transparently, which is in the best interests of the company’s members. Corporate executives use corporate governance principles to ensure that workers work together to develop professional stability and integrity, resulting in growth and financial prosperity for the company.

In current age of technology and liberalisation, when company upgrades occur on a regular basis, companies must establish a corporate governance framework. It also increases professionalism and makes the business more inclusive by strengthening employee relationships and ethics. Assume a corporation wishes to include corporate governance trends into its structure. Employees may effectively provide results for a long time in this scenario, the share price remains healthy, mismanagement and corruption concerns are minimised, investors acquire great trust as employee performance improves, and the company’s brand value improves in the market.

In the previous few decades, numerous firms have been liquidated over scandalous grounds in the corporate environment. It happened mostly because senior officials ignored corporate ethics, decided to display larger current profits, did not enable auditors to stop illegal procedures, allowed greed to flourish, and sacrificed long-term earnings, among other things. As such occurrences became more common, government agencies in many nations (particularly the United States) that served as market regulators began enacting regulations to keep such events under control.

In the United States

The phrase ‘Corporate Governance trends’ became popular in the United States (U.S.) for the first time in the early 1970s. Since many large companies of the time went bankrupt and had to go down, the government saw the need for it. Those in charge of these firms were criticized for passively managing their respective companies’ issues.

The problem gained prominence in 1974, when the Securities and Exchange Commission (S.E.C.) began questioning three directors of a business named Penn Central with a diverse portfolio for allegations of misdeeds. The SEC discovered that top officials were fully aware of bribe payments and that business documents were being manipulated. The S.E.C. reported an identical scenario involving many other bigwigs who had unexpectedly shut down. The agency resolved numerous similar situations by changing the composition of the board of directors, establishing audit committees, and hiring outside directors.

The Securities and Exchange Commission revised the New York Stock Exchange’s listing criteria in 1976, stating that every firm must have an audit committee comprised of competent independent directors. These significant improvements were termed the S.E.C.’s authority over corporate management and governance. This was the commencement of corporate governance, which began in the United States for the very first time and has seen numerous modifications over the last several decades.

The Sarbanes-Oxley Act was enacted in the United States of America in 2002. Previously, the country has experienced scandals like WorldCom and Enron, in which external auditors and directors had a strong connection and so disregarded corporate misconducts. And these businesses failed. The Act of 2002 introduced New York Stock Exchange (NYSE) listing standards as well as company management changes. It discussed the accuracy of C.F.O. (Chief Financial Officer) and C.E.O. (Chief Executive Officer) responsibilities, the preparation of annual reports, the increased independence and powers of external auditors, the appointment of financial experts to audit committees, and the establishment of a regulatory committee for auditors.

In the United Kingdom

Corporate governance trends emerged in the United Kingdom (UK) in the 1990s. The Financial Reporting Council (which governs UK Accounting Standards) and the London Stock Exchange created a committee to address the financial elements of corporate governance trends as the first such reform. Many UK firms had closed at the same period due to a lack of responsibility in management by senior executives. In addition, a drop in competitiveness as a result of the recession exacerbated its problems.

The Cadbury Committee created the code of conduct addressing the London Stock Exchange’s regulation for a company’s listing in 1992, which all firms in the UK were required to follow. This committee became well-known all across the world. Many nations have embraced it as a model code for creating corporate governance responsibilities in their own organisations. The conclusions of the Cadbury Committee were used by our own Kumar Mangalam Birla Committee in India.

The Greenbury Committee investigated and published the compensation packages of directors in their annual reports in 1995. The Combined Code of 1998 includes suggestions for investors and corporations, such as recommending compliance, conducting yearly reviews of corporate activities, and keeping shareholders informed. The Smith Report underlined the need of audit committees in 2003.

The Organization of Economic Cooperation and Development (OECD) issued its corporate governance guidelines in 1999, after consulting with the World Bank, member nations, and other private sector groups. It discussed the safeguarding of shareholders’ rights, the need of timely disclosures to encourage openness, and the duties of the board of directors.

In 1999, the Basel Committee issued principles for creating corporate governance trends in financial institutions throughout the world. It discussed internal controls, the function of internal and external auditors, remunerations of the directors, and senior management’s compliance responsibility.

Corporate governance trends imposes ways into finance and structures institutions in order for them to make sound judgments. Since its inception in the United States in the early 1970s, 3 main models have emerged that other nations have adopted. They are:- (1) Anglo American model (AAM) (2) Japanese Model (JM) (3) German Model (GM).

Traits of Corporate Governance trends and their growth over time

Indian business organisations adopted company management standards from the British era. It centred on the management of organisational models, as commercial institutions entered into contracts with other organisations to administer the latter. There was a misuse of financial assets as a result of the lack of control and regulations.

The demand for good corporate administration grew in the early 1980s and 1990s, when global organisations looked forward to establishing offices in India. The Chamber of Indian Industries (CII) suggested a corporate administration code in 1996, outlining how the corporate governance framework would address the practises and techniques necessary for business management. The code attempted to bring clarity to the Indian corporate sector by developing a code for corporations, investors’ concerns, and openness in business and disclosure of information by entities.

The tasks and structure of audit committee boards are discussed in Clause 49 of the SEBI Act, which went into effect in 2000. This provision was changed again in 2004 in response to the Murthy Report suggestion about shareholder disclosure, corporate disclosure, audit board disclosure requirements, and Indian businesses’ disclosure standards. Due to a lack of preparation, this 2004 modification was only executed in 2006.

In recent years, India has experienced an increase in corporate fraud and mismanagement in the business sector. The Satyam scam shook the Indian business world in early 2009, as evidence revealed that its Board had failed to prevent large-scale financial fraudulent activities. Soon after, the National Association of Software and Services Companies (NASSCOM)[1] and the CII introduced their own set of corporate governance changes, with a primary focus on corporate ethics.

In India, there are numerous legislations that offer foundations for corporate governance trends. These frameworks are based on international standards. Standard Listing Agreements of Stock Exchanges, The Companies Acts (CA) 2013, SEBI (Securities and Exchange Board of India) Guidelines, Accounting Standards issued by ICAI (Institute of Company Secretaries of India), and Secretarial Standards issued by ICSI (Institute of Company Secretaries of India) are a few examples of such regulatory agencies.

The provisions of the Companies Act of 2013 establish a framework for corporate governance trends for both listed and unlisted companies. It discusses the Board of Directors’ composition, women directors, resident directors, independent directors, the audit committee of publicly traded firms, internal audits, nomination and compensation committees of various sorts of committees, and (CSR) corporate social responsibility programmes.

The SEBI Code of Corporate Governance trends discusses the board of directors’ composition, the audit committee’s constitution and duties, director compensation, the role of shareholders and administration, compliance, and the corporate governance report.

As more businesses embrace corporate governance frameworks, they are seeing increased diversity in all areas. Rather than insiders, private organisations are inviting experienced outsiders to join their Board of Directors. Board agendas are now being developed with stakeholders’ requirements in mind. Engagement between multiple levels of management today needs high-quality governance.

Network governance will become more prevalent, with power distributed to varying degrees, all participants having equitable ownership, and each governing body holding power.

Corporate governance trends have a significant role to play in the future. The corporate entities in their company have a very forward-thinking perspective. They have a vision for their firm, and they work hard to ensure its future success. They take risks and implement creative ideas, and they strive to accomplish futuristic ideals, a philosophy, and future ambitions.

With increased interdependence and free commerce among nations and individuals worldwide, internationally recognised corporate governance norms are critical for Indian companies wanting to differentiate themselves in the global footprint. Companies must continuously strive to improve, enhance, and upgrade themselves by providing more dependable integrated product and service quality. They must be more forthcoming and open about their actions.

Corporate governance trends ought to have a comprehensive approach, be value-based, and be devoted to corporate social upliftment, social responsibility, and environmental preservation. It also entails doing activities that are creative, productive, and good in order to offer value to the different stakeholders that are served as consumers. Finance, taxation, banking, and the legal environment all demand strong company governance.

As a result, corporate governance is a means and not an end, but corporate excellence should be the goal.

Read our article:The Doctrine of Constructive Notice under Companies Act, 2013

All about the Doctrine of Indoor Ma...

The doctrine of indoor management, commonly referred as "TURQUAND'S RULE," is a 150-year-old no...

All You Need to Know About Intellec...

A right in an ordinary sense means the standard of permitted action within a certain sphere, an...