The Doctrine of Constructive Notice under Companies Act, 2013 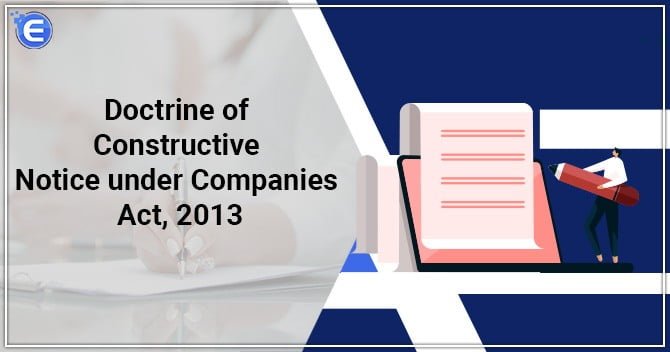 In the eyes of the law, the Doctrine of Constructive Notice is the notion of presumption of knowledge of that particular subject or information.

A company is a separate legal organisation that can be created by a group of people with the goal of carrying out commercial activities for profit. Certain laws, rules, and regulations regulate the company’s establishment and operation. The goal of enacting such rules is to safeguard both the firm and its management, as well as any outsiders who are contractually engaged with the organisation. There are a set of rules and principles in place to protect the business from outsiders and the other way around. Companies earn income by utilising the country’s resources. As a result, corporations play a vital role in the expansion of the economy, necessitating the creation of laws regulating them. These regulations serve as a deterrent to unfair and unethical business activities.

The Doctrine of Constructive Notice

One of the most significant principles we encounter when studying Company Law is the notion of Constructive Notice[1]. Because the AOA of the Company are a public document and are accessible to everyone u/s 399 of the Companies Act, 2013, the doctrine of Constructive Notice implies that the AOA are well-known by an outsider who seeks to hold any relationship with the company in the near future.

The AOA and MOA are regarded as “public documents” from the time the business is registered. They are openly available to the general public for observation. As a result, it is assumed that everyone interacting with the corporation is well-versed in its laws and regulations. This assumption is known as the Doctrine of Constructive Notice.

According to Palmer, the concept only applies to documents that impact the company’s rights.

The idea of constructive liability aims to simplify corporate regulations. It offers organisations with protection when engaging with outsiders. Nevertheless, this rule was perceived to be doing more harm than good, reducing its credibility. The courts developed the theory of indoor management to limit the implementation of this clause where the rule in conflict is internal.

This English concept was first applied solely in situations of fraud, but it quickly expanded to cases of gross negligence as well.

Constructive Notice and Actual Notice are frequently used interchangeably. Even though a person does not have actual notice, he may have constructive notice. Actual notice is when a person has knowledge of an occurrence or a matter for the first time. Constructive notice, on the contrary, indicates legal notice despite the fact that no real notice was ever provided. However, under the given circumstances, the individual should be able to fairly know about the process. For instance, we frequently see legal notices published in newspapers, etc.

In Oakbank Oil Co. v. Crum (1882) 8 A.C. 65, it was ruled that everyone who engages with the corporation is believed to have not only read its MOA and AOA, but also fully comprehended the true meaning of the articles. This type of notice is known as Constructive Notice.

Characteristics of Doctrine of Constructive Notice

Effect of Doctrine of Constructive Notice

It is the outsider, according to the Constructive Notice theory. It has the burden of knowing the documents that guide the firm. Before signing any contract with the company, he should be well-versed in all legal paperwork. It is also the 3rd party’s obligation to grasp the true meaning of the provision and conditions included within. Corporate bodies are favoured under the theory.

In the matter of Kotla Venkataswamy vs. Rammurthy, AIR 1934 Mad 579, the Madras High Court debated the extent of the concept of constructive liability. The issue in this case was whether the mortgage bonds were properly issued in accordance with the company’s AOA, making the company responsible. Article 15 of the Company’s AOA states that all deeds, hundies, cheques, certificates, and other documents must be signed on behalf of the Company by the Managing Director, the Secretary, and the Working Director before they are deemed legitimate.

In this instance, the plaintiff accepted a mortgage deed signed by merely the secretary and an executive director. The plaintiff cannot make a claim under this deed, according to the court. The Court further stated that if the plaintiff had read the articles, they would have learned that a deed to carry out the work needed by the 3 designated officials of the firm was poorly signed, and they would not have accepted an inadequately signed deed. Despite the fact that she may have behaved in good faith and that her money was used for the benefit of the company, yet the bond is invalid.

Nevertheless, the court later developed a principle and held in the case of Royal British Bank v. Turquand (1856) 6 E&B 327 that, while the third party should have notice of all the contents of the MOA & AOA, they are not required to scrutinise the internal matters and see whether the corporation had carried out in compliance with all internal procedures.

The doctrine of constructive notice is an exception to the principle of indoor management, and it is crucial to highlight that the doctrine of constructive notice doesn’t enable outsiders to have report or notice of the company’s internal activities. As a result, if an act is approved by a MOA or AOA, an outsider can presume that all the formalities are followed in carrying out the act, which is called as the Doctrine of Indoor Management or “The Turquand Rule”. This is based on the seminal case of The Royal British Bank vs. Turquand (1856), 6 E&B 327.

In layman’s language, the theory of indoor management states that the company’s indoor problems are its concern. As a result, this indoor management principle is critical for those who deal with a firm through its directors or other individuals. They can presume that the company’s members are acting or executing their responsibilities within the limits of their express authorization. As a result, if an act authorised by the Articles is carried out in a certain manner, outsiders working with the business might infer that the director or other officials acted under their authority.

OBJECTIVES OF THIS DOCTRINE– Business is a domain that needs the protection of all contractual parties, and great business can only ensure the growth of the economy and trade. Though this principle appears to be for the safety of those dealing with the company, its more essential aim is to encourage corporate investments in order to keep the business and the economy running smoothly.

“The wheels of business would not turn smoothly if individuals interacting with firms were obliged to extensively scrutinize a company’s internal machinery to check if something was not wrong.”

Exceptions to the Doctrine of Indoor Management

The theory of indoor management is not perfect in all cases; rather, there are some situations in which this principle cannot and must not be implemented. These exceptions, like the doctrine’s establishment, are likewise judicially established, and they are as follows:-

The principle of indoor management is inapplicable if the person dealing with the irregularity and was aware of it. This is the first and most important constraint on the application of this concept. As a result, the presumption of irregularity could not be relied on by “insiders,” i.e. those who, by virtue of their position in the corporation, are in a position to know whether or not internal regulations have been followed.

Because the words “in the absence of circumstances putting him on inquiry” were used in the Turquand case, the benefits of this principle are unavailable to the person who had suspicions of irregularity, because in this scenario he is bound to satisfy himself of the legality of the transaction and all issues pertaining to it.

The rule of Turquand does not apply to forgery. It is true that people dealing with limited liability corporations are not required to enquire into their indoor administration and will not be harmed by irregularities of which they are unaware, as stated in Ruben v. Great Fingall Consolidated, (1906) AC 439, but this does not apply to a forgery. The plaintiff in this case was the holder of a share certificate issued by the respondent company. However, this was issued by the company secretary, who attached the corporate seal and forged the signatures of two directors.

The “power of delegation” is commonly seen in the AOA. Knowledge of the MOA and AOA is required to claim protection under this rule and under this type of exemption. A person who did not consult with or act in accordance with its terms is not covered.

This is the exception to the “Turquand rule” that is most easily invoked. It is self-evident that if the act of the company’s officer appears to be beyond his authority, it must not be relied upon, and if relied upon, the company cannot be said to be bound by the act.

The Anand Behari Lal v. Dinshaw and Co. AIR case provided a very clear statement of this rule: “the plaintiff accepted the transfer of property of the company by an accountant of the firm, which was clearly outside the capabilities of an accountant, and the company was ruled not to be bound.”

Constructive notice is frequently cited as an unrealistic ideology. The reason for this is because the doctrine of Constructive Notice is a fictitious concept established by courts through judicial pronouncements. In a single day, a lot of contracts are formed between the outsider and the corporation. The doctrine imposes an obligation on every outsider to be aware of all of the company’s legal documentation. This is done to ensure that the business world runs smoothly and efficiently.

Read our article:All about Principle of Lifting of Corporate Veil under Companies Act, 2013

Unpacking the scope of Corporate Go...

The conception of ‘corporate governance trends' is not a goal in itself; rather is only the o...