All about the Doctrine of Indoor Management under Companies Act 2013 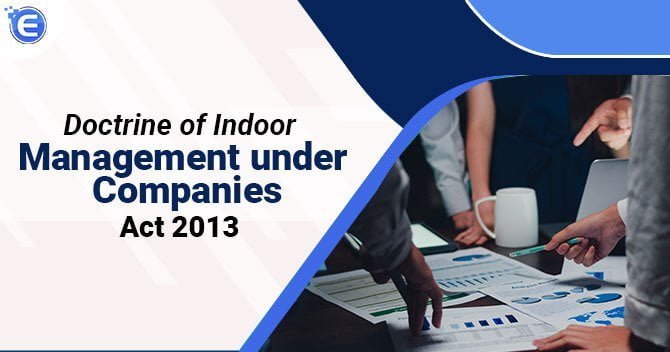 This theory highlights the idea that an outsider whose acts are in good conscience and who has engaged in any transaction with a corporation might have an assumption that there are no internal anomalies and that the corporation has followed all procedural requirements. This is the security offered by the Doctrine of Indoor Management. It is important for the outsider to be familiar with the company’s Memorandum of Association in order to seek redress. This principle extends to the government authority as well.

The concept arose from the foundational decision of Royal British Bank v Turquand (1856), 6 E&B 327, where t he company’s Articles of Incorporation allow for the borrowing of funds on bonds, which needs a resolution to be voted in the General Meeting. The directors obtained the debt but did not pass the resolution. The loan payments fell behind, and the firm was held responsible. In the absence of the resolution, the shareholders declined to accept the claim. It was held that the corporation is accountable because the person engaging with the company is reasonable to believe that the essential compliance with regard to internal management has occurred.

The House of Lords confirmed the doctrine further in the case of Mahony v East Holyford Mining Co. [1875] LR 7 HL 869. In this situation, the company’s AOA was required that the cheque be signed by 2 directors and countersigned by the company’s secretary. It was then discovered that none of them who signed the cheque had been legitimately appointed. It was held that the person who receives the cheque is entitled to the amount because the selection of directors is part of the business’s internal administration and a person interacting with the firm is not obligated to inquire about it. The decision was backed up by Section 176 of the Companies Act of 2013, which stipulates that flaws in the selection of the director do not invalidate the activities performed.

The doctrine protects 3rd parties that engage in a contract with the firm out of any faults in the company’s internal procedures. Because other parties cannot detect internal abnormalities in a business entity, the company would be held accountable for all or any losses incurred as a result of these irregularities. The principle of constructive notice safeguards the corporation against third-party claims, but the doctrine of indoor management safeguards third-party claims from corporate processes.

Foundation of Doctrine of Indoor Management

The norm is built on obvious convenience in commercial relationships for any parties with a Company.

Exception of Doctrine of Indoor Management

It’s the most notable exception to Turquand’s Rule, as the benefit of Turquand’s Rule can’t be obtained by those who are already aware of irregularities in the internal management of the company. This will confuse the concept of indoor management while also nullifying the objective of the doctrine of Constructive notice.

In the case of Howard vs. Patent Ivory Manufacturing Company (1888) 38 Ch D 156, the Articles of the corporation authorised the directors to loan up to 1,000 pounds. The limit might be raised with the approval of the General Meeting. The directors got 3,500 pounds from one of the directors who took debentures despite the resolution not being passed. According to the ruling, the corporation was only responsible to the amount of 1,000 pounds. Because the directors were aware that the resolution had not been enacted, they cannot rely on Turquand’s rule for protection.

If any individual working with the organization feels skeptical about the situations underlying a contract, he must investigate it. He cannot rely on this rule if he does not inquire. Some transactions that occurred under suspicious circumstances and surroundings are not protected by the “Turquand Rule.” It implies that if any of the directors or other heads notice any questionable activity related to the contract, they may conduct an urgent investigation and find out what is going on. If the individual fails to discover the suspicious behaviour and the person behind it, the court gives him all of the company’s rights and resources to do so.

In the matter of Anand Bihari Lal v Dinshaw & Co, (1946) 48 BOMLR 293, the plaintiff accepted a property transfer from the accountant. The Court ruled that the plaintiff must have obtained a copy of the Power of Attorney[1] to validate the accountant’s power. As a result, the transfer was deemed null and invalid.

It is important to highlight that the Doctrine of Indoor Management will not be applicable when an outsider depends on a forged document in the name of the business entity. A corporation cannot be held responsible for forgeries performed by its officials. Transactions involving forgeries are void-ab- initio (null and void) because there is no free consent; there is no consent at all.

This was established in the case of Ruben v Great Fingall Consolidated [1906] 1 AC 439. A share certificate with the company’s common seal was issued to a person. A valid certificate needed the signatures of 2 directors and the secretary. The certificate was signed in his name by the secretary, who also forged the signs of the 2 directors. The holder stated that he was unaware of the counterfeit and that he is not obligated to investigate it. The Court ruled that the corporation is not responsible for forgery committed by its officers, but that the Doctrine of Indoor Management has never been extended to encompass forging. Lord Loreburn took this to held that an outsider engaging with a company is not required to look into its internal administration and would not be impacted by any irregularities that they are ignorant of.

Acts performed by an officer of a corporation that exceed the extent of the officer’s apparent power will not hold the company accountable for any of the officer’s failures. In such a scenario, the outsider cannot seek redress under the doctrine of Indoor Management since the Articles did not grant the officer the authority to perform such activities. The outsider could only sue the business entity under the Indoor Management theory if the officer has the delegated authority to act on those conditions.

In the matter of Kreditbank Cassel v. Schenkers Ltd. (1927) 1 KB 826., the company’s branch manager had endorsed a few bills of exchange in the company’s name in favour of a payee to whom he was personally owed. He was not given any authorization to do so by the company. The court ruled that the corporation was not obligated. Furthermore, it was noted that if an officer of the business commits fraud on behalf of the company while acting with apparent authority, the corporation will be held responsible for the officer’s misconduct.

This exemption is the most controversial part of the Turquand Rule. AOA of the company typically include a “power of delegation” provision. In the case of Lakshmi Ratan Cotton Mills v. J.K. Jute Mills Co., AIR 1957 ALL 311, The company was run by managing agents, where one of the directors was also included. The AOA gave the directors the authority to borrow money and also gave them the authority to transfer this power to one or more of them. The director obtained a loan from the plaintiff. Furthermore, the Company objected to be bound by the loan on the grounds that no resolution was made instructing the director to delegate the right to borrow. Nonetheless, it was determined in the case that the corporation was obligated by the loan since the AOA permitted the director to borrow money and transfer the right to do so.

The doctrine of Indoor Management does not apply where the issue is the actual existence of an agency. The Kerala High Court decided in the case of Varkey Souriar v. Leraleeya Banking Co. Ltd. (1957) 27 Comp. Cas. 591 (Ker.), that the doctrine of Indoor management can’t apply if the dispute is not one of the scope of authority exercised by an apparent agent of a business, but of the agency’s mere existence.

The Turquand rule, or doctrine of indoor management, is a century-old idea that has been woven to meet the demands of the current day. The doctrine of indoor management emerged s a counter to the theory of constructive notice. It establishes a restriction on the idea of constructive notice and safeguards the 3rd party that dealing or contracting with the corporation and acted with good faith or bonafide intention. It was determined that the doctrine will not operate arbitrarily; there are some limitations imposed on it, such as forgery, third party knowledge of irregularity, negligence, where the 3rd party doesn’t read the MOA & AOA, and the doctrine would not be applicable where the question concerns the company’s very existence. The doctrine of indoor management encompasses the actions taken by governmental officials in the course of their duties. In the matter of MRF Ltd. v. Manohar Parrikar, (2010) 11 SCC 374, the principle of indoor management do not apply in the state of Goa since there was an internal irregularity that needed to be addressed, which is one of the doctrine’s exceptions.

Read our article:The Doctrine of Constructive Notice under Companies Act, 2013

In order to resolve and decide upon all the matters related to the Company law in India, the Go...

The COVID-19 (caused due to Novel Coronavirus), an acute respiratory disease, has bee...