All you need to know about MOA under Companies Act 2013 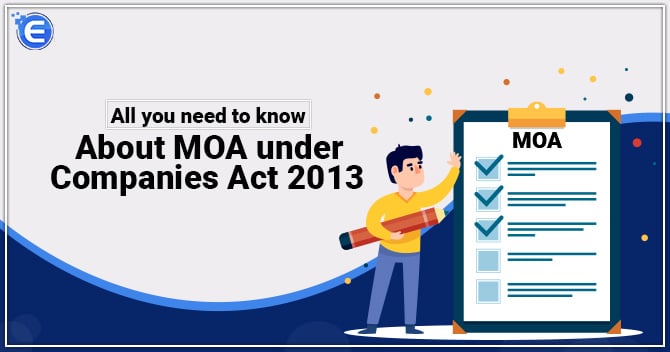 Memorandum of Association or MOA is a corporate document which is filed with the Registrar of Companies during the incorporation of a company. It comprises of the fundamental conditions under which the company is allowed to operate. In this article, we shall discuss certain essential aspects of the MOA under Companies Act 2013.

Definition of MOA under Companies Act 2013

According to Section 2 of the Companies Act, 2013, memorandum refers to the memorandum of association (MOA) of a company as framed originally or altered from time to time in pursuance of the previous company law or of this Act.

MOA is an essential corporate document that outlines the company laws under which a company operates. It involves several clauses which define certain critical aspects under the provision of the Companies Act 2013. These clauses are listed below:

Now let’s discuss each of these one by one.

When a company is incorporated, it runs a specific business and have a specific objective. The object clause states the business which the proposed company will commence after its incorporation and that too in detail. Under the companies act 2013, only the main objects and other objects that are ancillary to main objects are covered. A Company that does any other business apart from this can lead to closure of business. In case of certain businesses such as loan and capital funding, specific approvals are required from different authorities such as RBI. In order to commence insurance business, approval from IRDAI is needed.

This clause provides the liability of company’s members. The liability may be limited or unlimited. It means that when the company is winding up, in case of a company with limited liability, members must pay an amount up to the nominal value of shares taken by them however, in case of a company with unlimited liability, members must pay without any limit for the debt or payment that the company must pay.

This clause contains the names and the address of the first subscribers. The subscribers of the memorandum are required to take minimum one share. As per the Companies Act 2013, the minimum number of members is 2 if it’s a private company and 7 if it’s a public company and 1 in case of a One Person Company.

Is it possible to alter or change the MOA of a company?

According to Section 13 of Companies Act 2013, MOA can be changed or altered anytime however, there are few conditions that must be complied with before making such alteration or change.

This section governs the process and conditions for making any change in the MOA. Further, the clauses that can be altered are as follows:

However, these are also supported by other section in order to give effect to respective changes.

What is the significance of MOA under Companies Act 2013?

The significance of MOA under Companies Act 2013 can be deduced through the following:

Difference between MOA and AOA

The difference between the two is laid down in the table made below:

MOA under Companies Act 2013 is a fundamental document for formation of any company. As mentioned earlier, a company cannot be incorporated without this document. It can be referred to as the constitution of the company along with the Articles of Association.

Read our article:An In-depth Analysis of the Master Service Agreement

How to Start a Tech Company in USA...

Business creation is a myth. Value addition to a business is what is to be called real business...

How to Check Company Name Availabil...

The concept of company name availability is that the name proposed for registration. It must no...

The (LLP) Limited Liability Partnership is an upgraded version of the Partnership. The Limited...