Revocation of Power of Attorney 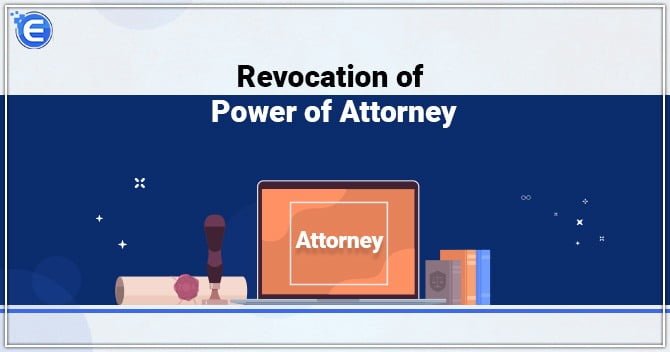 A power of attorney (PoA) is a type of legal document which allows an individual to appoint someone else to make decisions on his or her behalf in specific circumstances. Having a POA is usually required when there are several complex obligations, including legal tasks. This blog will further describe how to revoke a POA given on your behalf in India.

A power of attorney (PoA) is a legally binding document that allows a person to appoint another person to make decisions on his behalf in specific situations. It establishes a connection between a principal and an agent, and the person who has issued the PoA is legally responsible for the agent’s actions for the reasons for which the agent has been allowed to act on his capacity. The Power of Attorney Act of 1882 defines a Power of Attorney as “any document enabling a designated person to act for and in the name of the person executing it”. The agent is also called as the attorney-in-fact.

The necessity for a POA occurs frequently in a world where things are growing more commercial and advanced, with activities, including legal responsibilities, becoming more particular. In such cases, the Power of Attorney shall be given to another individual, authorising them to act on their behalf. A frequent example is when a client authorises his lawyer to act on his behalf in a property transaction.

Types of Power of Attorney

In general, there are two forms of Power of Attorney. They are:-

Kinds of Power of Attorney (PoA) based on revocation

Depending on the terms of the executed deed, a power of attorney may be of two kinds:-

In which circumstances can the Power of Attorney be revoked?

The principal-agent partnership between the attorney and the authorizer can be terminated in a variety of ways. Since there is no specific legislation regulating the subject, these concepts have been taken from the Indian Contract Act of 1872[1] and different courts in India that have interpreted basic principles of law and applied them to circumstances involving Power of Attorney. Here are some instances of how it may be done:-

There are a lot of situations wherein the individual who entitles somebody to act as his attorney can end it, including by express revocation of his authority, when the agency’s business has come to an end, if either the principal or the agent, or both, becomes insolvent, unsound mind, dies, or is/are adjudicated as insolvent by the court.

Section 202 of the Indian Contract Act applies in such cases, which stipulates that if an agent has an interest in the agency, the agency cannot be terminated without the agent’s permission.

Even though a Power of Attorney is irreversible once given, it can be withdrawn if there is gross mismanagement on the side of the agent, if the agent breaks the terms of the contract, or if the agent goes outside the extent of the powers.

As a result of this provision, the principal cannot withdraw a power of attorney without the approval of the agent if the agent has an interest in the subject matter of the PoA. Furthermore, such Power of Attorney is not considered withdrawn even after the principal’s death or insanity.

The following observations may be referred to in order to comprehend circumstances where PoA might be considered to be combined with interests:

In Seth Loon Karan Sethiya v. Ivan E. John, AIR 1969 SC 73, the Supreme Court of India held that the agency cannot be revoked in which such agency is formed in exchange for some valuable consideration & the authority granted by the agency is to protect the agent’s interests or to effectuate the security against such consideration. As a result, when the agent has an interest in the property, the agency could not be ended unless there is an express contract providing for such termination, to the detriment of the agency holder.

In another decision, Vishnucharya v. Ramachandra, ILR 3 Bom. 253, the agent was paid from the rent he gathered on behalf of the principal. The agency that allowed the agent to collect rent was ruled to be ‘uncoupled’ with interest. As a result, if the agency only grants some payment or commissions, it cannot be considered an agency combined with interest.

Procedure to revoke the PoA

As essential as the idea of Power of Attorney is to enable the principle to continue on his work even when he is not physically present at the location where such work is to be done, so is the principal’s power to terminate it to avoid any damage to his interests by the agent. Although revocation is feasible in most instances, there are certain exceptions. The principal/agent must be informed of these requirements before granting or receiving PoA.

How to Register Cyber Crime Complai...

Cybercrimes are the criminal activities that are carried out by using the Internet and computer...

In India, new technological developments are making a high impact on the quantity and the quali...