Can GST be an Instrument to Boost Economic Growth of India? 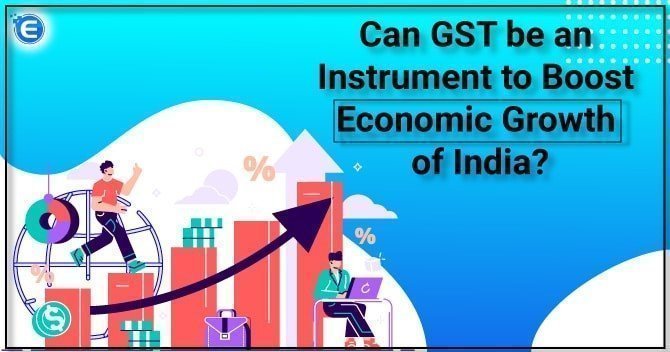 The GST regime bill, which was passed by the parliament after the 122nd amendment of the constitution, is expected to have an effect of the extensive tax base due to its policy of laying down minimum exemptions for goods and services taxes.

The main agenda behind GST is to bring all the multiple indirect taxes under one roof, which will eventually lead to the transparency of the tax being levied and at the same time, making the tax collection and imposition process easier and less complex. Now, the big question is can GST be Instrumental for Economic Growth?

The GST regime aims to bring about changes in the existing indirect tax model by simplifying it in every possible way. This regime will make sure that anybody going ahead with GST Registration in India will recognize its approach of ease of doing business. As mentioned above, the tax base will widen and there will be fewer exemptions, leaving a positive impact on the goods and service tax through the simplification of tax structure and a uniformed implementation of tax.

It is nevertheless expected to be an economic boost for India’s economic growth; besides, the IMF (International Monetary Fund) has also extended its support to the new GST regime and states that once the regime is properly functioning, it may lead to enormous economic growth in the country. Thus, declaring GST Instrumental for Economic Growth.

The GST regime is seen as one step closer to making India’s vision into reality about abolishing multiple and complex taxation systems across the country. On registering for the GST regime, businesses will have access to the input tax credits of the actual value paid for the goods and services. Also with the new GST regime system, India’s GDP growth is expected to rise by 0.9 per cent to 1.7 per cent according to the economic researchers. However, the fear following the GST is that it might prove to be harsh towards smaller industries due to the removal of the 1.5 Crores exemption limit.

There won’t be any longer the receipt charged basis for the services rendered as the new turnover will be solely accrual-based. There may be a possibility of downward pull instead of economic boost should there be a failure in perfect execution. Once the goods get cheaper, the competition in the markets would automatically increase, which will lead to GDP growth even by 2 per cent which of course as stated, depends entirely on the execution strategy.

Until the GST rates are finalized and fully functional, one can only make observations and assumptions about whether it will be a saviour or a disaster. Once it has been regularized, the rate and exemption system of the GST will be the determining factor if it will boost or drain the economy.

Possibilities of the GST regime

Let us look at some other possibilities of the GST regime and what are the possible outcomes:

After analyzing all these points we also root that GST could be Instrumental for Economic Growth, but like any other new initiative it has room for improvements. Do you wish to register for GST? Or are you looking for a GST registration or implementation advisory? Would you like to know about the GST impact on your industry? Please feel free to contact Enterslice, India’s leading online legal and tax advisory firm.

Originally when the Goods and Service Tax Act, 2016[1] was implemented, GST rates structure was...

The GST composition scheme has been introduced to promote SME in India. It has several benefits...