Appointment and Regularisation of Additional Director as per Companies Act, 2013 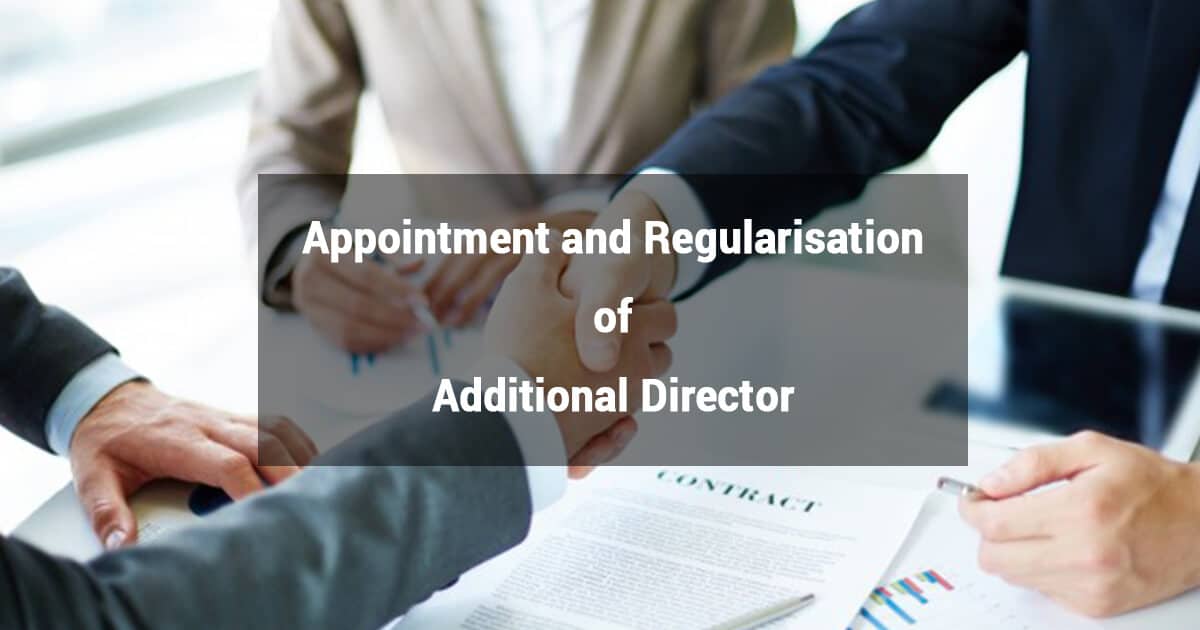 Which section is governed by the Companies Act, 2013 for the appointment of the Additional Director?

Section 161(1) of the Companies Act, 2013 is governed for the appointment of the Additional Director

Points to be remembered

What are the Duties and Liabilities of Additional Director?

The duties and liabilities of the additional director are the same as the other directors are on Board. The duties and responsibility which include but not limited to:

Notes: If a director of the company contravenes the provisions of this section such director shall be punishable with fine which shall not be less than one lakh rupees but which may extend to five lakh rupees.

Procedure for Appointment of Additional Director

For appointing an individual as an additional director in the Company the appointee must hold the DIN number. If the appointee is not holding the DIN then it required to apply, the application for allotment of DIN can be applied through the Company in which he/she proposed to be appointed as an Additional Director. To apply for the DIN the Digital Signature Certificate (DSC) is also required of the appointee.

Documents required for the appointment of the Additional Director

The Individual who is appointed as an additional director in the Company his/her term will be up to the ensuing General Meeting of the Company. After getting approval from the shareholder he/she will be regularized as a Director of the Company.

Procedure for Regularization of Director

The additional director intending himself or Member proposes him/her to appoint as a Director, a notice of not less than fourteen days must be given to the Company along with the deposit of Rupees One Lakh* before the date of General Meeting which shall be refunded to such person if the person proposed gets elected as a Director or gets more than twenty-five percent of total valid votes cast either on a show of hands or on a poll of such resolution.

Inform the Members at least seven days before the date of the General Meeting of the Company. It is not necessary to serve the individual notice to the Shareholder if the Company advertises such candidature not less than seven days before the meeting at least once in a vernacular newspaper in a principal vernacular language of the district in which the registered office of the Company is situated and at least once an English language in an English newspaper circulating in that district.

Convene the general meeting and pass the Ordinary Resolution for the same.

File the Form DIR-12 with the registrar of companies within 30 days from the date of passing of the resolution approved by the Members.

1. In case of private Companies depositing of Rupees One Lakh does not apply.

2. In case of Nidhi Companies Rupees Ten thousand to be deposited instead of Rupees One Lakh.

The Company can appoint additional Director if authorized by the Article of Association of the Company and if appointed then the term of an additional director shall be up to the ensuing General Meeting of the Company. The duties and liabilities of an additional Director are same as duties and liabilities vested to other directors. So if any Company intending to appoint as additional director and want the process to be followed as per the company Act, 2013, we are having the experienced professional team to carry out the above mentioned process. Kindly contact us at ENTERSLICE.

How to Charge Depreciation on Asset...

Depreciation means a reduction in the real value of tangible used by the assessee in the course...

The Government of India recently announced certain changes to the stamp duty, which will be eff...

How to Convert a Private Limited Co...

Section 18 of the Companies Act, 2013 confers right to the companies for the conversion of comp...