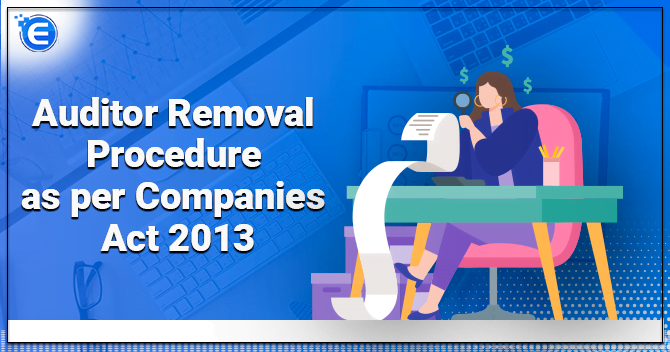 An audit means an examination of the financial reports which include a balance sheet, statement of changes in equity, income statements, cash flow statements, and notes providing a summary regarding significant accounting policies and such other explanatory notes which are required to be presented in the annual report of the Company, by an independent individual or an organization. Here we will discuss the Auditor Removal Procedure as per Companies Act 2013[1].

Who is an Auditor?

Eligibility & Qualifications for Appointment as Auditor

Disqualifications to Act as an Auditor

A person is disqualified to act as an Auditor under the following circumstances:

The following are the roles and responsibilities of an auditor:

A Company’s first auditor is required to be appointed within 30 days of incorporation in a general meeting or within 90 days at an Emergency General Body Meeting. The first auditor appointed shall hold the office from the conclusion of such meeting in which the auditor appointment has been being confirmed until the conclusion of a fifth annual general meeting.

Written consent from the auditor along with the necessary proof of qualifications under Section 141 of the Companies Act, 2013 are required to be submitted prior to such appointment.

The Auditor for Government companies shall be appointed by CAG.

An Auditor may be removed under the following scenarios:

Removal before the expiry of a term

A special resolution & prior approval of Central Government is required to be obtained for removing an auditor from the office before the expiry of his term.

The application for Central Government approval for removal of auditors is to be made in Form ADT-2, within 30 days of the passing of the Board Resolution.

A general meeting (EGM) is required to be held by the company within 60 days of receipt of Central Government’s approval for the passing of Special Resolution.

The section also provides that, the auditor must be given a reasonable opportunity of being heard at the meeting.

Removal after the expiry of a term

The Company may not reappoint the Retiring Auditor at its AGM if such auditor has served consecutively for a term of 5 years or 10 years, as provided by Section 139 and may appoint another entity to act as its auditor.

In such cases, a Notice is required to be sent for considering the Resolution for an appointment at the AGM for-

The company is also required to send the copy of a notice to the retiring auditor.

The Retiring auditors are eligible for making a Representation.

Where the representation is not sent as mentioned above, a copy of the same shall be filed with the ROC.

The following forms shall be required to be filled and submitted for auditor removal:

An auditor when appointed by a company is appointed for a period o 5 years however sometimes the Board management may remove the auditor. The provisions regarding the auditor removal is provided under Companies Act of 2013.

Dormant Company was introduced under the Companies Act 2013, and it was not there earlier in th...

Operating a business is a huge responsibility. India's regulatory environment is extremely chal...

Read about Filing of Annual Return...

Every company is required to file an annual return with the Registrar of the Companies at the e...