Repercussion on Non-Filing of Statutory Document with ROC 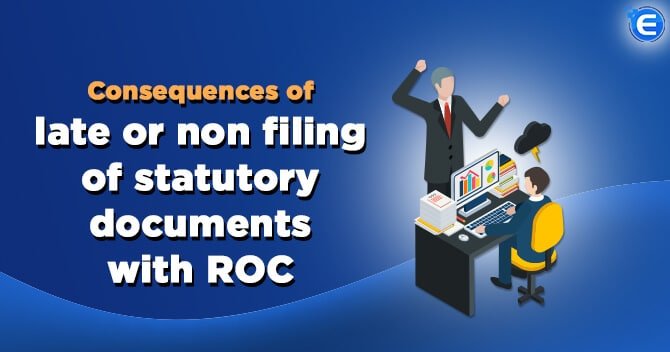 The Companies Act 2013, has the provisions which contain certain rules and regulations that the ‘company’ whether public or private limited has to abide by, right from the initial stage of incorporation to the final stage of dissolution. This is to be done in order to encourage transparency and high standards of corporate governance. The directors of the company coordinate and inform the Registrar of Companies (ROC) of any material change in the financial, legal or managerial status of the company. The Companies Act has provisions for the mandatory filing of the annual return and financial statement and other statutory documents of the company with the ROC within a stipulated time that has been prescribed under the Act. The changes are made in the provision of filing of the e-forms or non-filing of the statutory document with ROC by introducing Companies Amendment Act 2017 and Companies Amendment Ordinance Act 2018.

Provisions Relating to annual filings made to ROC

Provisions Relating to Financial statement with the ROC

Non-compliance with Section 92 and Section 137

It can be concluded that various provisions regulate the conduct of the company in matters of filing of information.  The annual return and financial statement under Sections 92 and 137 respectively, provides the guidelines for filing and also lays down the penalties and prosecution on the non-filing of a statutory document in the prescribed form. However, a company can be also be dissolved because of such penalties and compounding of an offence under Section 441(1). Therefore, it is necessary that a company if fails to make filings before ROC within 300 days must go for compounding of the offence i.e. a compromise or settlement with the regulating authorities in order to save itself from future prosecutions. However, the government has also tried to provide some relief to the companies and reduce some complexities of the former Act by introducing amendments in the form of Companies (Amendment) Act, 2017.

MSME Form 1 is a mandatory compliance for specified companies. Specified Companies are types of...

Declaration and Payment of Dividend...

Declaration and Payment of Dividend under Companies Act 2013, has been enacted for distribution...

Read about Filing of Annual Return...

Every company is required to file an annual return with the Registrar of the Companies at the e...