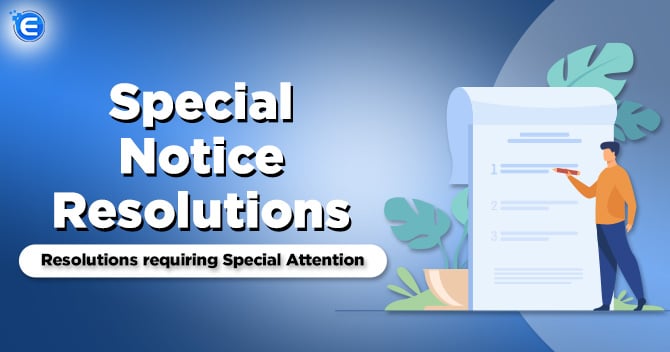 Lawmakers took this concept of Special Notice as being of prime importance for resolutions requiring special attention; and also that the procedural aspects do differ from other resolutions.  Also, the say of shareholders (somewhat Minority Stake ones) being the owners of the company was given this privilege to invoke these provisions. Also, enabling provisions are made for giving an opportunity of being heard on whom the matter being dealt.

Let us have a deep insight into the Applicability & Procedural concepts thereto.

Special Notice (also Members Resolution) as discussed earlier is an intention to move a resolution at a General Meeting (either EGM or AGM)  has to be given specifically by the shareholders governed by Section 115 of the Companies Act, 2013 and Rule 23 of the Companies (Management and Administration) Rules, 2014 in line with Secretarial Standards (SS-II).

Points to Ponder (To be considered before enabling the provisions)

Before enabling the aforementioned provisions, the following needs to be considered from the Company’s Perspective:

Also following should be considered from the Member’s Perspective:

Also, Read: E-Form MGT-14: Its Concept and the Procedure for Filing it.

For Directors: Form DIR-12 be filed within 30 days from the Date of Meeting

For Auditors: Form MGT-14 be filed as per Section 117 of the Act within 30 days from the Date of Meeting

Also, Form ADT-1 is to be filed within 15 days from the date of the meeting while updating the inclusion of such an appointment where the retiring auditor is not re-appointed.

Punishment and Compoundability on Contravention

The Company and every officer of the Company who is in default shall be punishable with a fine up to INR 10,000, where the contravention is a continuing one then the fine shall be INR 1,000 for every day of contravention.

As per rule 30 of Companies (Management and Administration) Rules, 2014 contravention of rules made under this Section, the Company and every officer who is in default are punishable with a fine up to Rs. 5,000, where the contravention is a continuing one then the fine shall be Rs. 500 for every day of contravention continued.

Also to be noted that the offences committed under the Section and rule are compoundable under section 441 of the Act.

From a detailed analysis of the Section and provisions made thereunder, the Company should be more cautious before enabling such provisions. Also, the Resolution so requiring the special notice to be moved should be considered in the best interest of the Company and Stakeholders thereto.

Read, Also: Removal of Directors as per Companies act 2013.

Simardeep brings with himself over 3 years of experience in Compliance & Legal domain. Professionally, he is a Company Secretary, Law Graduate and a Bachelor in Commerce. As a professional, he has handled various Corporate Law and Secretarial Assignments for Big Corporates. He also has hands-on experience in setting up entities in India & Abroad along with Involvement in Investment Banking Deals. Also provides advisory on NCLT, RBI, and FEMA compliances and acts as a mentor for startups from the Compliance prospective.

Appointment of Company Secretary as...

The Appointment of Company Secretary (CS) has been made mandatory for a few class of the c...

A Director Identification Number (DIN) can be deactivated due to different reasons, and the DIN...

Procedure of Issue of Convertible D...

Meaning Of Debenture Section 2(30) of the Companies Act, 2013 defines "debenture" to include de...