Can Object Clause be altered under the Companies Act, 2013? 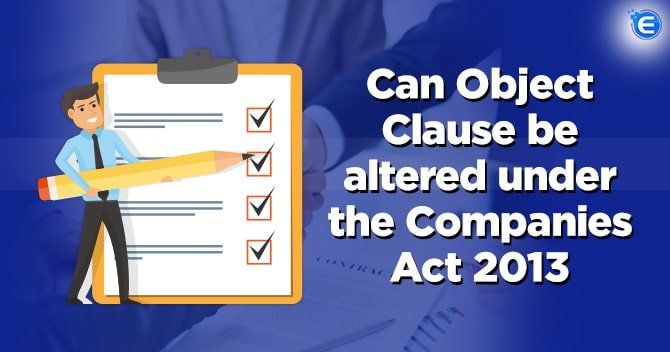 The (MOA) Memorandum of Association of a company therefore also has object clauses that determine the purpose and range of activities for a company. Once the incorporation of a company is done, it may require changing or altering the object clause. This requires alteration to be made in the MOA of the Company.  Section 13 of the Companies Act 2013 deals with alteration in the MOA. According to it, every clause mentioned on the MOA can be altered but with the exception of the capital clause which requires an ordinary resolution to be passed, whereas section 13 say by passing a special resolution.

The object clause of the Company is usually the third clause of Memorandum of association of the Company. It states the objects are the business/purpose for which the Company which has to be or is incorporated and any other matter considered necessary in furtherance thereof. If any act was done by the Company which is beyond the objects and powers as provided by the Companies Act, 2013 then it must be considered as ultra virus. The making of an object clause is one of the most importance clauses for the incorporated Company.

Objects Clause of Memorandum of Association

As also discussed above the object clause specifies the activities which a company needs to carry on for running its business activities. The Company is bound by that clause, and further cannot carry on any activity which is not mentioned in its Memorandum of Association. The activities which are carried out beyond or outside the objects will be ultra vires, and it would be void. However, the Company can do anything incidental to the objects that are specified. There are two types of object clause as mentioned under section 4 of Companies Act, 2013 they are:

Procedure for amendment or alteration of object clause of MOA

Object Clause of MOA has to be altered by looking into the provisions under Section 13 of Companies Act 2013 read along with Companies (Incorporation) Rules, 2014. According to Section 13 of Companies Act 2013 that a Company may by passing a special resolution and further after complying with the procedure mentioned in this section can alter the provisions of its Memorandum. The following is the procedure provided below:

STEP-I: Convene a Board Meeting

STEP-II: Issue Notice of the EGM

STEP-III: Holding of the General Meeting

According to Section 13 of Companies Act, 2013, Company is required to pass the Special Resolution by the shareholders to file a form for Alteration of Memorandum within 30 days of passing of Special Resolution. It must be filed with the concerned Registrar of Companies in Form MGT-14 along with prescribed fees and also with the following attachments:

STEP-V: Duty of Registrar of Companies

Also, Read: SPICe has Emerged to Be the Most “Fast-Track Company Registration System”.

The Registrar has to issue such certificate which will be the conclusive evidence that all the requirements in respect to the alteration of object clause have been duly complied with by a company. Also further, no alteration can be made under this section. This must have an effect until the Company has been registered in accordance with the provisions of this section. The alteration will be said to the complete and effective only when the issue of the certificate by the Registrar.

The following can be the specific reasons for which the Company may alter its object clause, which is as follows:

A new business mentioned in other objects clause cannot be commenced without taking the prior approval of the shareholder by passing a Special Resolution. The company law prescribes that any activities beyond the scope of the objects will be ultra vires and hence void. In other words, any of the transaction which is beyond the scope of the powers specified in the objects clause of MOA which is not reasonable incidentally or necessary for the attainment of the objects is ultra-vires of the Company

Consequences of the act of ultra vires

If an act which is deemed to be an ultra-vires transaction it can have the following consequences:

Sample board resolution for change in the object clause

“RESOLVED THAT pursuant to provisions of Section 13 and other applicable provisions of Companies Act, 2013 it includes any statutory modifications or re-enactment thereof, for the time being in force and the rules framed there under, consent of the Board of Directors of a Company be and is hereby accorded, and subject to the approval of the Registrar of Companies, NCT of Delhi and subject to the approval of Shareholders in General Meeting, to append following sub clause (4) after sub clause (3) of clause III (A) of the (MOA) Memorandum of Association of Company.

FURTHER RESOLVED THAT for the purpose of giving effect to these resolutions, Mr. XYZ, Director of the Company be, and it is hereby authorized, on behalf of a Company, to do all acts, matters, deeds and things as deem necessary, proper or desirable and to sign and execute all necessary documents, the applications and returns for the purpose of giving effect to the aforesaid resolution along with the filing of necessary E-form as the return of appointment with the Registrar of Companies, NCT of Delhi.

Read More: Procedure for Change in object Clause of the Company.

Key Components of a Company’s...

It is mandatory for a company to draft and disseminate an organisational POSH Policy to be in c...

Appointment of Directors under Comp...

A Director may be defined as an individual who directs, controls or manages the affairs of the...

Appointment of Auditors in a company is a necessary compliance for all types of companies. An a...