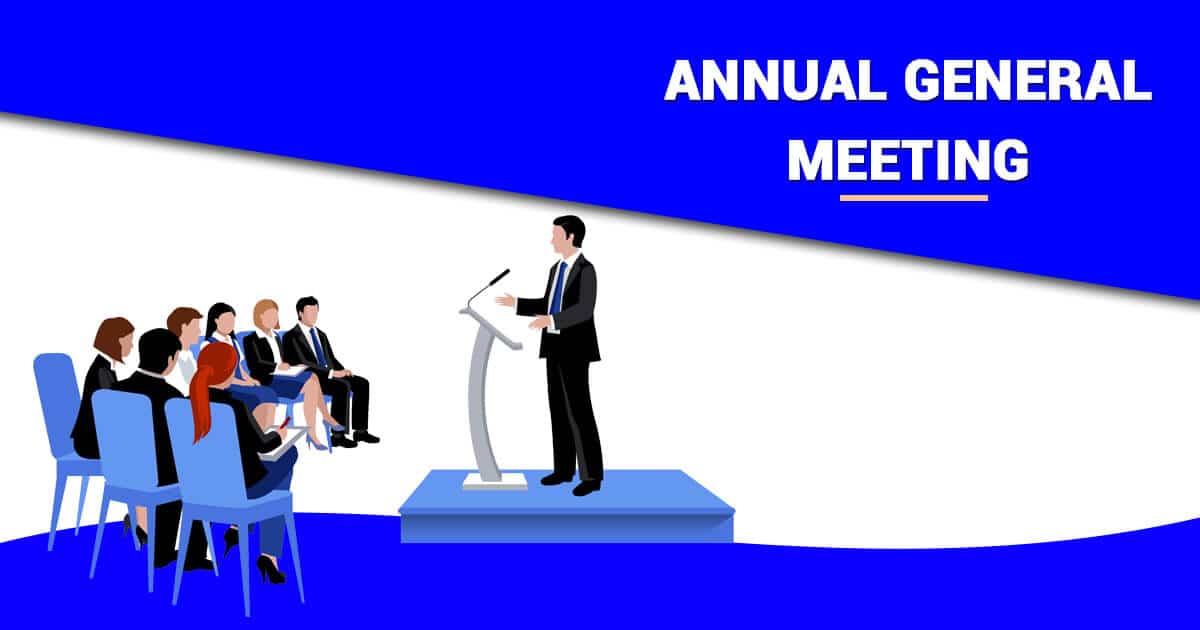 Every Public Company or Private Limited Company is required to conduct an Annual General Meeting that provides an opportunity to the shareholders and stakeholders to meet every year and discuss matters relating to the Company, which ensures the protection of the interest of the shareholders.

An Annual general meeting gives a comprehensive view of “what step a company should take to be more successful”, which will help shareholders, members, and the board to decide the future course of action. The annual general meeting must be held on a working day at the registered office of the company.

As per the “Secretarial Standard on General Meetings-SS2” issued by the Institute of Company Secretaries mandates every company to observe secretarial standards concerning General Meeting and Board Meetings.

Exception, in the case of One Person Company

*Here sufficient cause means – Natural calamity/Confiscation of books of accounts.

Notice for Annual General Meeting to the members

The notice for general meeting must be sent to the-

at least 21 days before the meeting, along with the annual report of the Company.

Note – Shorter notice with the consent of all the members entitled to vote at the meeting.

Contents of the report on the Annual General Meeting

Time and Place of General Meeting

Annual General Meeting must be held between 9 a.m. to 6 a.m. i.e. during the business hours.

Note – General Meeting once conducted, may be concluded even after business hours.

A General Meeting must be held on a day that is not a National holiday.

The meeting shall be held at the registered office of the Company.

However, in the case of Unlisted Company, a general meeting may be held at any place in India, if consent is given in writing or through electronic mode by all the members.

In the case of Government Company – The annual general meeting must be held at its registered office or any other place with the approval of the Central Government.

Adjournment of the Annual General Meeting

The meeting can be adjourn for the below-mentioned reasons:

Note – There is no prohibition to hold adjourn meeting on a national holiday, if the meeting is adjourned due to lack of quorum.

The Quorum for the General Meeting

Quorum represents the minimum number of members present in the meeting. Unless the articles of the company provide for the larger number, quorum in the general meeting required throughout the meeting.

In the case of Public Company

In the case of Private Company

Minutes of the Annual General Meeting

Every company shall maintain the minutes of every general meeting of any class of shareholders or creditors and every resolution passed by postal ballot and every meeting of its board of directors.

The minutes should be prepared and signed as may be prescribed in the Companies Act 2013[1] and kept within the 30 days of the conclusion of the Annual general meeting. Also, In case of a resolution to be passed through postal ballot the minutes of the resolution in shall be prepared and kept in the office.

The Signing of the Minutes

Also, Read: What is the Importance of Minutes of Board Meeting.

Each page of every minute book shall be initialed or signed by the chairman of the meeting within the aforesaid period of 30 days. In case there is no chairman of the board or the death /incapability of that chairman within that period, by a director authorized by the board.

Companies may be Penalized For not...

Recently CSR Rules have been amended. By the way of an amendment to Company law, Finance Minist...

All you Need to Know About the Appo...

An Independent director is a part of the board of directors of a company that does not have any...