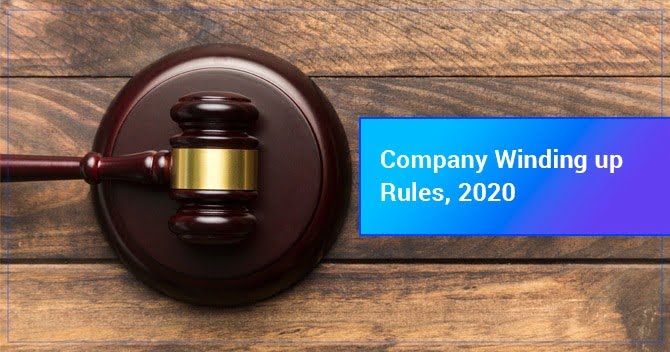 Winding up is a process to dissolve a company or put an end to its corporate existence. There are several reasons for winding up of a Company such as loss, Bankruptcy, mutual agreement among stakeholders etc. The last stage of companies’ existence is winding up of a company. As prescribed in Section 270 of the Companies Act 2013, a company can wind up either by a Tribunal or by way of voluntary winding up. On January 24, 2020, the Government eased the winding-up rules for small firms. Now small firms can wind up their business without moving to National Company Law Tribunal (NCLT). The Central Government introduced new rules for winding up through the powers conferred to it under Section 468(1) & (2) and Section 469 (1) & (2).

What is Winding up of Company?

According to Section 2(94A) of the Companies Act, 2013, winding up means ‘winding up as prescribed in this Act or liquidation under the Insolvency and Bankruptcy Code, 2016’.

Winding up is a step for dissolution of a Company, where its assets are realised and used in paying off its debts. After clearing its debts, if there is any unpaid amount left, it is used for the profit of its members and its creditors by paying it back to them.

An administrator or Liquidator is appointed to take control of the company, collect its assets, pay off its debts and finally to distribute the surplus amount among the members as per their rights.

Winding up of Small Companies as per Company Rules, 2020- An Introduction

The Ministry of Corporate Affairs notified new rules for winding up of Companies. Now small firms can wind up their business without approval. The rules have provided summary procedures for liquidation of Companies. Now the Central Government will grant all the required permissions instead of the Tribunal. As per the rules it is specified that wherever the word Tribunal is mentioned, it shall be read as Central Government. The following firms are to be considered as small firms according to the new rules:

The procedure introduced is known as a summary procedure. The new norms which will be applicable from April 1, 2020, will reduce the burden of the National Company Law Tribunal by enabling summary procedures for liquidation to be filed with the Central Government.

What are the eligibility criteria for a Company to be considered as a Small firm for Winding up?

The Companies specified under Section 361(1) of the Companies Act, 2013 are eligible for winding up under this procedure. The following type of companies are considered as small firms:

What is the Summary Procedure for Liquidation/Winding up of Small Companies?

The steps for winding up have been mentioned below:

Powers and functions of Official Liquidator, in Summary or Winding up of Company

The following are the powers and functions of the official Liquidator:

If your Company is being wound up or you are planning to wind up your Company , speak to us! We will provide you with an alternative to compulsory liquidation. Our professionals will advise you with the best possible solutions available to help you get out of this process, hassle-free.

Petitions for winding up of small companies are subject to various conditions, including the thresholds on turnover and paid-up capital. A large part of the procedure is made applicable to regular companies. But still, there is ambiguity regarding whether summary winding up will be fast-tracked by merely shifting the Jurisdiction of the Central Government. An essential factor for summary winding up is that the Central Government through the Regional Director will provide all the required approvals, hence shortening the overall winding up timelines.

The main objective of the Producer company is to facilitate the formation of co-operative busin...