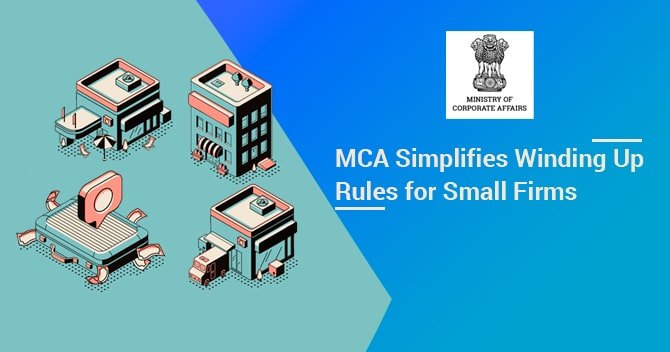 The Ministry of Corporate Affairs (MCA) on Tuesday notified rules for winding up of companies.

What does the term winding up suggest?

Winding up or liquidation is the process of dissolving a company. In this process, the Company’s assets are collected and sold to pay its debts. A Company can be wound up in two ways. First, the Court can mandatorily wind up a company. The second way is known as “voluntary winding up” in which the shareholders or the creditors of the Company can themselves apply to wind up the Company.

The rules for winding up a business have been simplified for smaller firms as they no longer will have to take approval from Tribunal for liquidation of their Company rather Central Government will give required approvals for winding up.

The rules notified by MCA provide summary procedures for liquidation of the following class of companies based on the latest audited Balance Sheet:

The Central Government will provide the required approvals for winding up to the above-mentioned class of companies rather than the Tribunal.

The Winding-up rules notified by the Ministry of Corporate Affairs will be effective from 1st April 2020. The rules prescribe how official liquidators have to go about managing the resources of the Company that goes into liquidation. The rules mentioned seek to reduce the burden of the NCLT by enabling summary procedures for liquidation to be filed with the Central Government.

The Ministry of Corporate Affairs recently amended the One Person Companies Rules after the ann...

All you need to know about Form AGI...