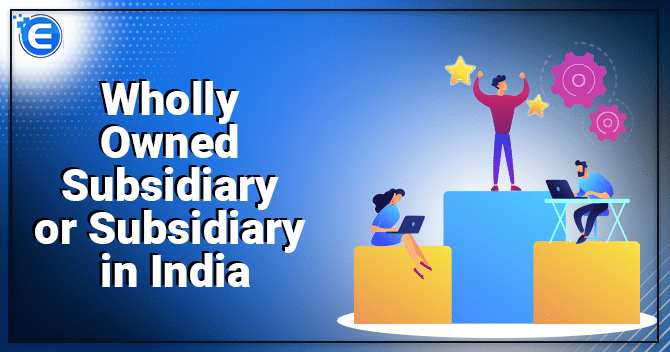 Before starting up an entity in India, it is important to be aware of the available options and especially the most beneficial mode of business available. In this article, we will discuss the procedure for registration of a wholly owned subsidiary company in India

Another type of beneficial entity is a wholly owned subsidiary for those who want to set up a permanent establishment in India.

What is Wholly Owned Subsidiary?

A company who choose to operate in more than one country can operate its business through a wholly owned subsidiary.

The subsidiary company is a company which can be incorporated by acquiring the majority of shares of the company (more than 50%) or either by way of controlling the composition of a board of India. Holding or subsidiary company is related to each other by virtue of their holding subsidiary relationship having separate legal entities.

These types of companies can be incorporated as a private limited company in India. They are treated as Indian companies under the Income Tax Act[1], and they are also eligible for the deduction and exemption benefits like other Indian Companies.

The Private Limited Company is defined under section 2 (68) of the companies act in 2013. It includes the company

Two or more persons can hold one or more shares jointly and shall be treated as a single member.

There are certain requirements to be fulfilled in order to set up Wholly Owned Subsidiary. Here are the following requirements:

The advantages can be summed up as under:

It is a very important benefit to a parent company who can exercise operational or strategic control over its subsidiary company.

It provides a benefit of cost synergies in such a way by using a common financial system, sharing the administrative cost and other expenses between parent & subsidiaries.

It provides the benefits to both parent company and as well as to the subsidiary company. Under this, subsidiaries can retain its brand name.

There is a limited liability for both companies. The liability of the subsidiary company in case of losses shall not be borne by the parent company.

It provides protection and security to the company’s trade secrets, expertise and technical knowledge along with the control over the operations.

It may be noted that a foreign company can incorporate a wholly owned subsidiary in India after considering all the benefits associated with it.

A subsidiary company is considered as a wholly owned subsidiary company when it’s all common stock is owned by another company. Wholly Owned Subsidiary Company is an independent legal corporation having its own framework and administration however; its day to day business is directed by the parent company.

In order to incorporate Indian Subsidiary Company, similar process is followed as in case of Private/Public Company in India. The company should be registered with the Registrar of Companies.

It may be noted that to ease the process of doing business, MCA introduced a new form SPICE+ recently.

For incorporation, SPICE+ has to be filed now. This form comprises of two parts-

These documents shall be required for filing application–

In the case of Foreign National-

With wholly owned subsidiaries, it is possible for the parent company to manage and diversify. Wholly owned subsidiary retains control over operations, products and processes. In case you have any other query related to Company Incorporation, contact Enterslice.

Read our article: Understanding the Concept of Wholly Owned Subsidiary outside India

Insight into the Duties and Respons...

The director of a Private Limited Company will qualify & Responsibilities of a Director ful...

How to Incorporate a Company in Swi...

Company formation is Switzerland involves taking up of several actions that include drafting of...