Understanding the Concept of Wholly Owned Subsidiary outside India 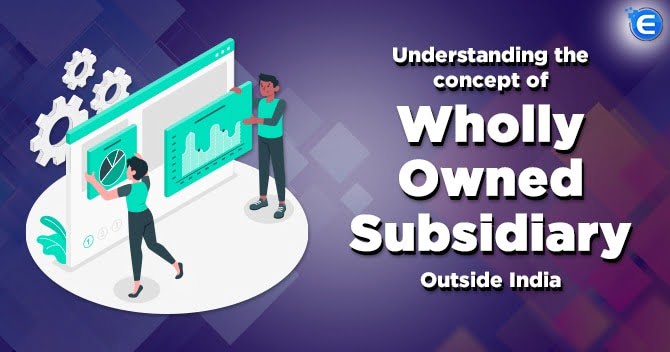 Overseas investments in Joint ventures and Wholly Owned Subsidiaries have been recognized as an important avenue for promoting global business by Indian entrepreneurs. There are some significant benefits associated with such overseas investments, such as transfer of technology and skill, access to a wider global market, promotion of brand image, employment generation etc. Such investments are essential drivers of foreign trade.  It means investments under the automatic route or the approval route through contribution to the capital or subscription to the memorandum of a foreign entity or through the purchase of existing shares of a foreign entity, thus showing a long term interest in the foreign entity i.e., Joint Ventures or Wholly Owned Subsidiary.

Wholly Owned Subsidiary means a foreign entity formed, registered or incorporated according to the laws and regulations of the host country whose entire capital is held by the Indian party. It is a separate legal company where the common stocks are owned and controlled by the holding or the parent company. The parent company has 100% control over the entity, and such company functions in accordance with the guidance of the parent company. It may be noted that the decisions for wholly-owned subsidiaries (WOS) are taken by the parent company; however, it does have its own senior management that looks after the business operations.

The common stocks are not publicly traded for a WOS; therefore, there are no individual shareholders. The parent company appoints its Board of Directors, but it is still treated as a separate legal entity. It means the provisions applying on the WOS shall not necessarily be applicable to the parent company.

The main purpose behind incorporating Wholly Owned Subsidiaries is that-

What are the methods of funding in a Wholly Owned Subsidiary?

Investment in the Wholly Owned Subsidiaries outside India may be funded out of one or more of the following:

Procedure of making foreign investments in a Wholly Owned Subsidiary

Pledging of shares of a Wholly Owned Subsidiary

The shares of WOS may be pledged by an Indian party as security for availing either fund based or non-fund based facility for itself or for the WOS from an authorized dealer/public financial institution in India or from an overseas lender provided that the overseas lender is regulated and supervised as a bank plus the Indian party’s total financial commitments stay within the prescribed limit by the RBI for overseas investment from time to time.

Transfer of share or security held in a Wholly Owned Subsidiary

An Indian party can transfer by way of sale without the approval of Reserve Bank to another Indian party or to a person residing abroad any share or security held by it in the WOS or JV outside India provided the following conditions are fulfilled.

The two business forms, Joint Ventures (JV) and Wholly Owned Subsidiaries (WOS), are quite distinct in terms of their ownership structure, risks benefits and uses. These differences have been specified below.

Wholly Owned Subsidiaries make it possible for the parent company to manage and diversify. Generally speaking, the Wholly Owned Subsidiaries retain legal control over operations, products, and processes. Some of the examples of WOS include Reliance Industrial Investments and Holdings Limited owned by Reliance Group of Companies, Concorde Motors India Ltd, owned by TATA Motors.

The Reserve Bank of India (RBI) brought out a major notification which relates to Foreign Excha...

.In India, transfer of shares between two residents of India involves payment of consideration....

Compounding of offences under FEMA...

Compounding of offences is where an individual agrees to not report an offence or convict the o...