How can a Foreign Entity enter into the Indian Market? 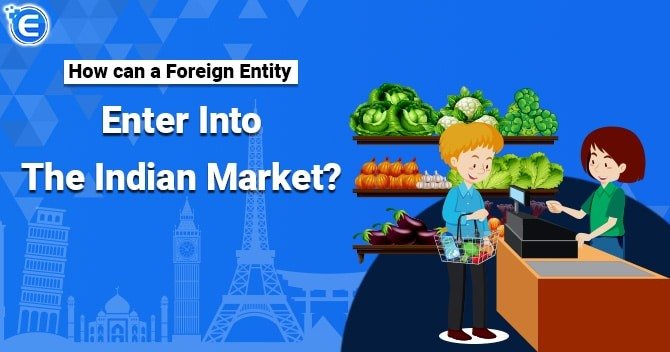 What do you mean by a Foreign Entity/Company?

As per the Companies Act, Foreign Company is any company or body corporate incorporated outside of India having a place of business in India, whether by itself or via an agent, and conducts business activity in India.

The following factors are attracting foreign entities to enter into the Indian market:

India is one of those countries with business friendly laws. Therefore entities get attracted to it.

Another important factor involves is the great potential of the Indian market.

Companies entering into India can take advantage of the fact that Indian market has favourable conditions that allows it to make sustainable progress.

This is another advantage of starting a business in India as a foreign entity. India has a significant amount of people who have a good command over English language. This makes it an attractive location for foreign entities to set up a business here.

Ways in which Foreign Entity make their way into Indian market

Foreign entities can make their way into Indian market through:

The term liaison refers to communication and cooperation. So liaison office is used for communicating with the head office of the company. It is referred to as the representative office of the company. It cannot undertake any trading, commercial or industrial activity. The foreign entity should have a decent profit making track record in the home country and must also have minimum net worth $50k. The office can be set up subject to the permission of the RBI initially for a 3 year period. Extension can also be obtained for the same.

Project Office can be established by foreign entities in India to execute special projects and it’s formed to meet short term projects. Project offices is usually established when a foreign company gets a project from an Indian Company and if the project is provided funds by bilateral or multilateral financing agency.

A wholly owned subsidiary is company whose shares are held entirely by the parent company. It should be registered with the ROC. Another method is called the Joint Venture, where investment can be made directly in a foreign company by subscribing to its shares.

A foreign investor can enter into India by investing in an LLP in India. The Reserve Bank has permitted FDI under automatic route for making investments in LLPs. 100% FDI is permitted.

From the information provided above, it can be concluded that a new entity can be created in India in the form of JV, Wholly Owned subsidiaries and LLPs and through which a foreign company can invest and set up their business whereas, through liaison office, branch office and project offices, an already set up brand in the foreign can establish it in India as well. In the coming times, an increased number of foreign entities are expected to enter into the Indian market, benefiting both the foreign entity as well as the Indian economy by creating more employment and enhancing their incomes.

Read our article:What are the types of Foreign Direct Investment?

The meaning of Non-Repatriable basis means the sale or the result of the proceeds of the sale,...

Foreign Investment in India and its...

Overview Foreign Investment in India has been the direct result of policies undertaken and impl...

All you need to know about Foreign...

Any form of investment in India from any foreign company is considered as foreign investment. T...