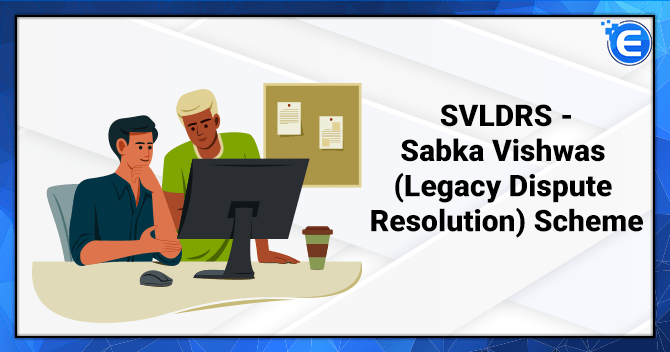 What is the SVLDRS (Sabka Vishwas Legacy Dispute Resolution Scheme) all about?

The scheme is for taxpayers who seek to close their pending disputes with a substantial relief provided by the government. This scheme provided relief to the taxpayers in the form of Dispute Resolution and Amnesty. The scheme was introduced with the intention of focusing on GST by clearing all litigations pending with regards to the previous tax regime.

This scheme also provides an opportunity to non-compliant taxpayers for voluntary disclosure option.

Main Features of this Scheme

To which all enactments does the SVLDRS apply?

There are 26 enactments to which this scheme applies. They are as follows:

Cases covered under the SVLDRS

The following cases are covered under this scheme:

The following are its benefits:

This scheme provides a relief margin on all duty demands from 40% to 70% of the demand, except in case of voluntary disclosure.

The relief shall be as follows:

Restrictions of this scheme

The following restrictions are placed under this scheme:

How does this scheme function?

The SVLDRS functions in the following manner:

The SVLDRS, 2019 was introduced on 1st Sep 2019 with an objective to reduce litigation relating to legacy taxes. It provided for a full waiver of interest and penalty. It may be noted that the scheme was closed on 30th June 2020.

The Shareholder is the one who invests in the Company by purchasing the shares from the open ma...

Prosecution and Punishment Under In...

There is a penalty and Punishment Under Income Tax for the various offense. Apart from that the...