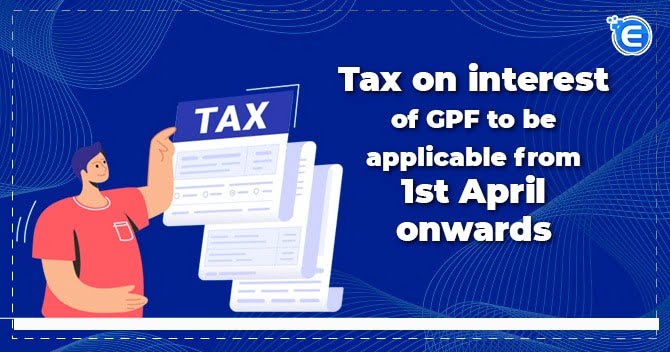 From 1st April, 2022 onwards, the interest earned on General Provident Fund (GPF) by both the government and non-government employees will not remain exempt anymore from taxation. The Union Finance Minister in her Union Budget 2021 speech had proposed tax on interest of GPF in case the interest earned exceeds the threshold limit.

What is general provident fund (GPF)?

What does the directive provide?

After the proposals made in the budget of 2021, the amendments were introduced by the Centre in the Income Tax Rules, 1961 prescribing the criteria of calculation of tax on interest of GPF. The directive issued by the Centre in August 2021 specified that the threshold limit is Rupees 5 lakh for the government employees and Rupees 2.5 lakh for the non-government employees.

Recently, the department of revenue has come out with another notification on 15th February, 2022 which asks the government employees having GPF subscription over Rupees 5 lakh in the Financial Year of 2021-22 to intimate the department about the interest earned by them before salary bills for the month of February 2022 are prepared for deduction of Tax Deducted at Source (TDS) from the pay and allowances.

Who fall in the criteria of tax on interest of GPF?

In response to the proposal made by the Finance Minister for tax on interest of GPF, amendments were made in Income Tax Rules where Rule 9D was inserted by the Central Board of Direct Taxes (CBDT[1]) last year. The rules said:

What are the criteria of computation of tax on interest of GPF?

Two separate accounts will be created within the Provident Fund account for the financial year of 2021-22. This is done for segregating both the taxable and non-taxable contributions.

In the following manner government notification prescribe both the taxable and non-taxable contributions:

The amendments will kick in from 1st April, 2022 onwards. These changes were introduced to stop the misuse of benefit to high income earners who were making high deposits in the EPF as the interest on provident fund corpus is tax-free and since no tax is levied at the time of withdrawal, it makes an attractive investment opportunity. The private sector employers have EPFO where the employers also make contributions whereas in the case of government contributions are made from the government end also in the GPF. This move of tax on interest of GPF is likely to benefit government employees more since it is available in those cases where the employers are not making any contributions.

Read our Article:Provisions related to cash transactions under Income Tax

To encourage the growth of the nation, the Union Budget 2019 Highlights was designed to boost t...

Tax saving is an integral part of everyone’s life. The tax saving investment can be made to s...