How Does International Taxation Operate? 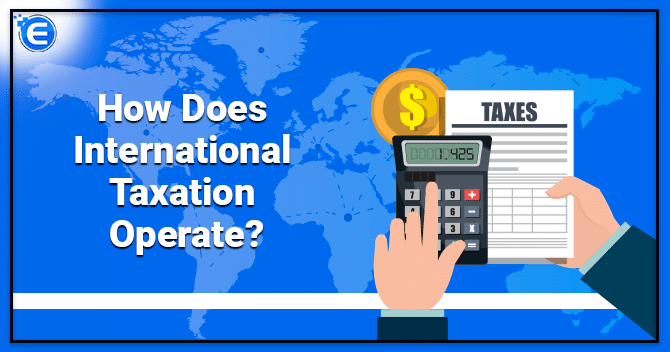 International Taxation is to tax the person’s income which has been earned or accrued by that individual in the country where he does business and where he resides. This means that the income earned at one place is taxed at two different places.

The person is a resident of India and he works in Dubai and comes back to India after 6 months. So the income which has been earned in Dubai will be taxed at the place of earning that is Dubai. He is a resident of India so the income earned has been accrued in India as per Section 9 of Income Tax Act 1961[1]. This means the income has been taxed at two different countries twice. As to avoid double taxation, India has entered into Double Taxation Avoidance Agreement with multiple countries to reduce burden of taxpayer.

Basics of International Taxation From The Perspective of India

Looking at this perspective, the concept has been divided into two parts:

Indian Income Tax Act levies tax On the Income Earned in a Foreign Country by Residents and Indian Income of NRI. As per the taxation law of our country, we have been using Residential Status in order to determine the taxable income for international taxation. The charging sections aresection 4, section 5, section 6, and section 9 of the Income Tax Act, 1961. Here we are looking at the taxable income that is, income earned in India as well as foreign country.

The point of consideration is:

Section 9 Which is a Deeming Provision Related to International Taxation

It has the list of income which gets accrued or arises in India for NON RESIDENTS even though the income has been earned outside India:

The above diagram clearly explains the situation of the income where it is expressed that taxation of non-residents is the issue of collection of tax at the time of generation of the income itself. So we have the provision of TDS where the tax is collected at the source by the payee at the source of remittance of the sum to non-resident. Sometimes, the non-residents do not even have assets or establishments situated in India. Such Income Is Considered As Non-Resident Income.

DTAA stands for Double Taxation Avoidance Agreement. The concept has been explained in the Vienna Convention on Law of Treaties 1960. It is not a taxing statute but an agreement between the countries. It is about how taxes are levied and computed at both the countries and under the treaty.

The agreement which has been signed between two countries in order to reduce burden of double taxation on the taxpayer and resolving issues of taxability of income between the concerned nations and to increase transparency and reduce tax evasion.

In every country, domestic tax law is the law which is applied on both residents and non-residents. But section 90 is the guiding section in case of the Double Taxation Avoidance Agreement.

Section 90(2) helps to bring the treaty in the enforcement.

DTAA Application With The Domestic Law

The following steps have to be considered for DTAA:

International Tax Planning is carried out to achieve tax effectiveness at the cross-border transactions and lawful routing of the business activities and capital flows. The international tax planning checks the relationship between two or more taxation systems, the impact of juridical and economic double taxation. It also involves tax incentives, or tax exemptions for foreign income, use of tax treaties and anti avoidance treatments.

Tax Planning is prevented by the government using the methods stated above. The reason is very simple even if the assessee wants to pay tax, due to prevailing provisions in double taxation agreement and information exchange systems. Also for any medium size tax payer, it is difficult to comply with the compliances of the international taxation.

Read our article:DTAA – What is the Double Taxation Avoidance Agreement?

The Tax Compliance Calendar for March 2020 is provided by the Income Tax and GST departments we...

Do Freelancers Need to Pay Tax in I...

Yes, Freelancer also needs to pay the tax in India. Many people don’t like doing a fixed time...