DTAA – What is the Double Taxation Avoidance Agreement? 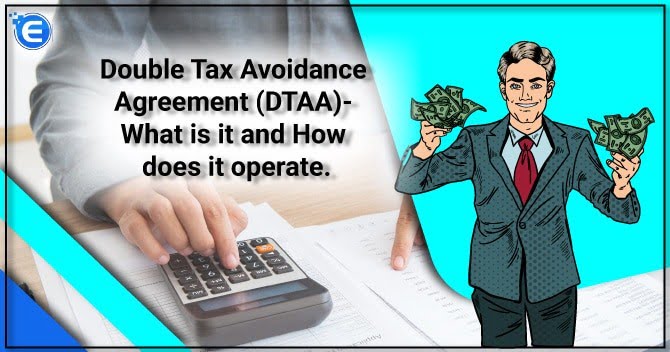 The Double Tax Avoidance Agreement (DTAA) is a tax treaty that is signed by two or more countries to facilitate the tax payers to evade paying double taxes on the same income. A treaty of DTAA becomes relevant in cases where a person is a resident of one nation, generates revenues from the other country.

DTAAs can either be summarized as the comprehensive income sources or restricted to certain areas, which means taxing income from air transport, inheritance, shipping etc. As of today, India has DTAAs with more than 80 countries and planning to enter into Memorandum of Understanding for such cause in the upcoming years.

What is Double Taxation under DTAA?

It is a form of tax that is levy by two or more countries on the same assets, income, and transactions. This double liability of taxes can be avoided in many ways; one of them is having a tax treaty between the countries in question.

The Double Tax Avoidance Agreement (DTAA) is a tax treaty that is signed by two or more countries to facilitate the tax payers to evade paying double taxes on the same income. A treaty of DTAA becomes relevant in cases where a person is a resident of one nation and generates revenues from the other country. The individual will be covered under the blanket of DTAA. DTAAs can either be comprehensive or particularly targeted on certain types of Income. This will be dependent on the holding/businesses of the citizens of one country to another. Some of the common examples of DTAAs are salary, services, property, saving, Fined deposit accounts, capital gains tax, etc.

For example, if a person went abroad for some work or deputation and receives payment at the time of his stay away from home, the revenue earned at that time will be subjected to double taxation. The person can claim relief on that income while filling the Income tax for that respective year, provided that there must be an applicable DTAA.

It is shown that the DTAA are being represented and their intention of easing promotional investment and tax matters. However,there are certain negative impacts of the DTTA which can originate from such agreements. ‘Double Taxation’ under many tax treaties means judicial double taxation (conditions where the tax payers are only taxed on the same income in more than one jurisdiction). On the other hand, there is another type of double taxation i.e. economic double taxation. This means taxation related to two or more taxes from one tax basis.

This problem arises when the DTAAs agreements[1] of the devious entity use DTAAS to pay low or no tax, simply by impersonating as entities or companies in one of the nation party to the agreement. This ultimately leads to revenue leakage. To prevent this, the member states of the DTAA agreement use a Clause related to Limitation of Benefits (LoB) in their DTAAs

Does India have DTAAs too?

Yes, as India is an emerging hub for International Investments and also forming a large number of immigrants, India has understood the significance of the DTAAs. For example, India has more than 80 active agreements of Double Tax Avoidance. Apart from that, the income tax act of India itself provides relief from double taxation which is covered under sections 90 and 91. In case of any conflict, the conditions under the DTAA will be binding to all the involved parties.

For example, if there is a DTAA between Singapore and India, under this, the capital gains of the shares in the company are being taxed on the basis of citizenship. It helps to decrease the revenue loss, streamlining the flow of Investments

To obtain the benefits that are mentioned under DTAA, an NRI person will have to provide the following documents:

In accordance with the Finance Act, 2013, a person will be eligible to claim the benefit of any relief under the provision of a Double Taxation Avoidance Agreement until and unless she or he provides a Tax Residency Certificate (TRC). To withhold or to obtain a tax residency certificate, the tax payer has to make an application in the form 10FA to the authorities of Income Tax. After the application is successfully processed, the tax residency certificate will be issued.

It is clear from the above discussion that the Double Tax Avoidance Agreement (DTAA) is a tax treaty that is signed by two or more countries to facilitate the tax payers to evade paying double taxes on the same income. India has signed this agreement with more than 80 countries. Though it seems beneficial India must wake up to the reality of the abuse of DTTAs agreements by many multinational companies. However, an absolute restoration of the Double Taxation Avoidance mechanism is a requirement of the hour. The team on the Direct Tax Code, after discussion with OECD countries, can propose suitable measures.

Read our article:What is Foreign Tax Credit and How to Claim it?﻿