Property cannot be attached indefinitely on the pretext of Investigation: PMLA 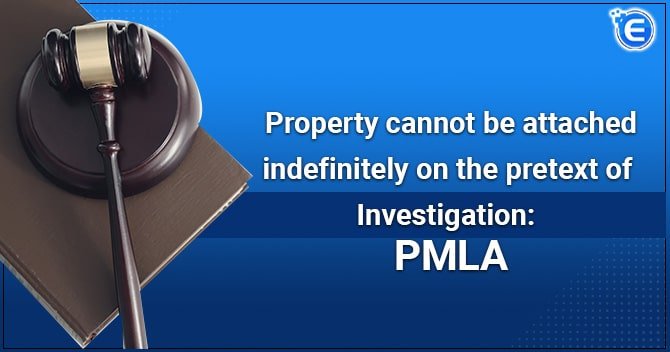 Recently, the Appellate Tribunal of Prevention of Money Laundering Act, 2002 (PMLA) came across a case where the appellant pleaded before the tribunal against the order of the Adjudicating Authority to attach his property.

Facts of the PMLA Case

Consequently, provisional attachment of the appellant’s immovable properties was done by the ED which was further confirmed by the Adjudicating Authority.

This provision talks about punishment for Criminal Conspiracy where those persons involved in the conspiracy for committing offences shall be charged as if they themselves have abetted. It is applicable for those offences whose punishment is above two years and for other offences the punishment would be imprisonment for not more than six months or fine or both.

This provision makes punishable abetment of any of the offences under the act whether or not that offence was committed or not as a consequence of such abetment. Such acts of abetment are punishable for a minimum period of three years to a maximum period of seven years.

These provisions talk about the offence of criminal misconduct of a public servant if he dishonestly or fraudulently misappropriates any property or enriches himself of any of the property entrusted to him in the capacity of a public servant. The punishment for such an offence extends from a minimum of one year to the extent of seven years and also liable for a fine.

Section 2(1)(u) talks about the definition of proceeds of crime which includes any property whether obtained or derived directly or indirectly as a result of a criminal activity relating to a scheduled offence in the PMLA or value of such property or in cases the property has been taken outside the Indian territory then the property equivalent of such property within the territory of India.

Section 2(1)(v) talks about the definition of property which includes any assets or property of every description whether tangible or intangible, corporeal or incorporeal or movable or immovable. The instruments and deeds which show the interest in or title to such property or its assets are also the property of any kind used in the commission of any of the scheduled offences.

The section talks about the power of the adjudicating authority to attach or retain or freeze or seize any record of any property involved in money laundering which shall not continue for more than a period of 365 days or till the time the issue related to this Act is pending before a court or under corresponding law of any country or under a criminal court of competent jurisdiction outside India.

The counsel from the respondent’s side argued that the immovable properties of the appellant’s that were attached by the ED according to the Sections 2(1)(u) and 2(1)(v) of the PMLA.

The counsel on the appellant’s side argued that as per the provision of Section 8(3)(a) wherein the adjudication authority has the power of attachment and retention or freezing of the property and such attachment/retention and freezing of property shall continue during the investigation for a period not more than ninety days. Citing the provision of Section 8(3)(a) of the PMLA, the counsel argued that the confirmation order of attaching the property by the adjudicating authority  is ultra vires the given provision. The counsel further took the attention of the tribunal to the fact that the prosecution did not file a complaint against the appeal and as a result, the appeal must be allowed.

The Tribunal was amazed by the fact the party whose immovable property has been made part of the prosecution compliant for the purpose of confiscation, that party has not been implicated by the Investigation Agencies depriving the party to defend itself.

The tribunal also noted that after the amendment made in the PMLA 13 of 2018, the legislature has kept a limitation period for the continuation of attachment or retention of property or any record after the attachment of property/ retention and the legislature intended to not to allow the Investigative Authority to keep the property attached or retain the records/ document/items indefinitely in the name of investigation.

Though after amendments made in PMLA and the time period for the purpose of keeping the property attached has been increased to 365 days. This, again as mentioned earlier in no way disputes the ratio of the tribunal i.e. property cannot be attached indefinitely by the concerned investigation agencies on the pretext of Investigation.

Read our article:Underlining the Scope of Investigation under PMLA

The Supreme Court recently on 14th February, 2022 declared that there exists no provision under...