Enforcement Directorate (ED) and its Functions 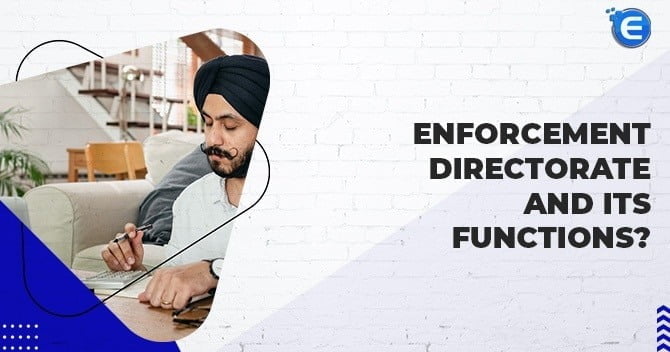 The Directorate of Enforcement, with its headquarters in New Delhi, was founded in 1956. It is in charge of enforcing the Foreign Exchange Management Act of 1999 (FEMA) and some clauses of the Money Laundering Prevention Act. For operational reasons, the Directorate is under the administrative supervision of the Department of Revenue; the policy elements of the FEMA, its law, and its modifications are under the purview of the Department of Economic Affairs. On the other hand, the Department of Revenue is in charge of policy matters relating to the PML Act. Prior to the implementation of FEMA on June 1, 2000, the Directorate implemented laws under the Foreign Exchange Regulation Act of 1973.

Organization of the ED

The Enforcement Directorate has offices in the following countries:-

Objectives of the Enforcement Directorate

Composition of the Enforcement Directorate

Some of the Enforcement Directorate’s officers are hired directly, while others are delegated from other state agencies such as the Income Tax, Excise, and other departments.

A quick glance of the legislation guarded by the Enforcement Directorate, as well as its powers under the PMLA and FEMA, are given below:-

1. Foreign Exchange Management Act, 1999: In India, the Act, passed in 1999, aimed to control foreign exchange, trade & commerce, development, and maintenance. Foreign exchange offences are classified as civil offences under the Act. It is based on civil law and has quasi-judicial powers. Since the year 2000, the Enforcement Directorate has been enforcing this legislation.

2. Prevention of Money Laundering Act, 2002: The Act was passed in 2002, but it has only been in force since July 1, 2005, when it was turned over to the ED for execution. It is a matter of criminal law. It focuses with the control of money laundering, the seizure of the accuser’s property gained from the laundered money, and other rules and penalties.

For the most part, the Enforcement Directorate serves as an Intelligence and Enforcement agency. To combat money laundering, it collaborates with the Financial Intelligence Unit India (FIU-IND).

Enforcement Directorate (ED) and its Functions

As previously stated, the Enforcement Directorate’s major functions are to implement the budgetary Acts FEMA 1999 and PMLA 2002. The ED’s other functions under these Acts are listed below:-

2- Investigate the violations of the PMLA.

3- FERA adjudication of a show-cause notice.

5- Cooperation with other countries to combat money laundering.

The case of Vijay Mallya

Mallya has also been charged with money laundering under the PMLA by the Enforcement Directorate. On the basis of a CBI investigation, the ED filed a complaint accusing him and A. Raghunathan (Kingfisher Airlines’ CFO) of a 900-crore default with IDBI Bank officials.

Directorate Enforcement is a government department dedicated to the advancement of our country. This is a government-supported agency that works to prevent and control money laundering in India. It is serving the nation with a good and clear vision. This agency is supported by a large number of officers from several departments. They investigate and settle the problem through the adjudication process, as well as conduct a variety of other functions by utilizing the powers granted to them by an agency. Its purpose is to boost our economy. It convicts individuals who commit fraud or engages in money laundering, as well as those who violate the requirements of the FEMA and PMLA. Its efforts in monitoring and combating money laundering, as well as serving as the guardian of two essential laws or acts, would help India improve and expand its economy.

The Foreign Exchange Management (Overseas Investment) Regulations, 2022, was notified by The Re...

All you need to know about MEIS Sch...