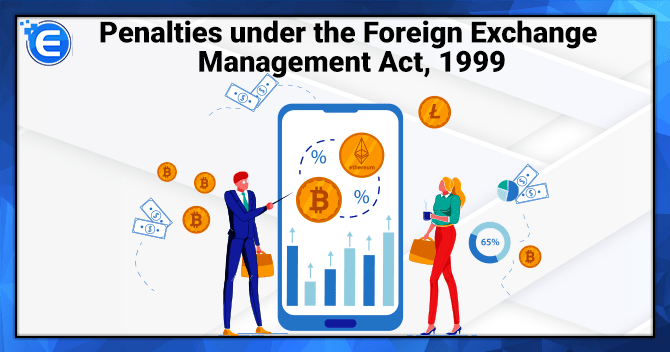 FEMA stands for Foreign Exchange Management Act. It was passed on 1st June 2000 to facilitate India’s foreign exchange market’s external trades and maintenance. Compliance with FEMA is important else; it will lead to Penalties under FEMA Act.

FEMA brought a significant change because it made all offenses regarding foreign exchange civil offenses instead of criminal offenses as dictated by FERA.

The article specifically talks about the Penalties under FEMA Act, 1999[1].

Compliance with the provisions of FEMA is important to avoid Penalties under FEMA Act.

There are 3 stages of compliance:

Thus, any person or company that wants to do business in a foreign country or buy foreign securities should comply with FEMA’s provisions to avoid Penalties under FEMA Act.

Offences and Penalties under FEMA Act

Section 13 talks about the Penalties under FEMA Act.

It states that any contravention under FEMA will invite the following penalties:

Section 14 talks about enforcement of the order of the adjudicatory authority.

Section 15talks about the power to compound contravention.

To have a better understanding, let us look into the meaning of compounding.

What is compounding of contravention?

What is the fee to be paid?

FEMA allows an authorized person to deal in foreign exchange or security. FEMA replaced an old act FERA to bring leniency and flexibility. FEMA’s primary aim is to facilitate external payments & trade and maintain the foreign exchange market in India.

Any person or company that wants to do business in foreign countries or buy foreign securities should comply with FEMA’s provisions to avoid Penalties under FEMA Act.

Read our article:Discontinuation of Reports under Foreign Exchange Management Act

Employee Stock Options, also known as ESOPS, is a part of the shares which are provided by the...

ECB are the instruments where the Indian borrowers obtain loans from foreign sources. ECB’s i...

Foreign Companies have established their presence in India since 1990. Due to restrictive trade...