Framework for Possession of Foreign Currency in India 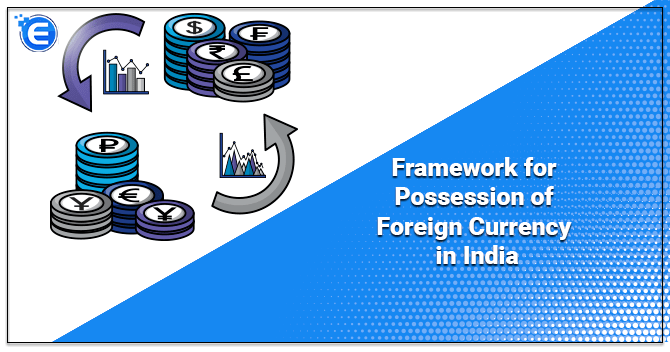 The framework for management and administration of foreign exchange in India is present under the Foreign Exchange Management Act 1999 (FEMA). Before this, foreign exchange was regulated under the Foreign Exchange Regulation Act, 1973 (FERA). The objective of FERA was the preservation and appropriation of assets related to foreign exchange in India. Under FERA, criminal punishments were imposed on offenders. This act was repealed, and the FEMA was brought out. With the introduction of FEMA in 1999, the transactions have been considered and divided into capital account and current account transactions. Under the FEMA, there is completed freedom for an individual to buy and sell foreign exchange related to current account transactions. This article describes the Framework for Possession of Foreign Currency in India.

Foreign exchange is not only required by individuals and companies. Businesses that have a liaison office and branch office outside India would be dealing with foreign exchange regularly. This would also apply to import and export transactions. Therefore it is essential to have a proper framework dealing with the possession of foreign currency in India.

Possession of Foreign Currency by a Resident Indian

Under the Foreign Exchange Management Act, only authorized persons can deal in foreign currencies. Inward and outward remittances can be made through authorized dealers. Any payment or credit can be made through the authorized dealer to a person who is resident outside India.  There are specific exemptions related to this. The Government of India and the RBI has classified the limits for possession of foreign currency by an individual. The following are the limits allowed by resident Indians:

Penalty for Possession of Foreign Currency in India

Under the Foreign Exchange Management Act, specific penalties are imposed for non-compliance with the above provisions. These penalties would be applicable when an individual breaches foreign exchange regulations. According to the regulations, if an individual contradicts any form of rule, then he would be liable to pay a penalty, which is equivalent to thrice the amount of sum involved or up to two lakhs where the amount is not quantifiable.  On further infringement the individual would have to pay a fine of Rs.5000 every day. Apart from this, the authority would order the confiscation of all forms of foreign currency, which includes- travellers’ cheques, foreign currency, and foreign coins.

The penalty imposed under FEMA is merely civil and not criminal. Stringent penalties were under the FERA for breach of foreign exchange regulations. In the case of Union of India and Another v. Venkateshan S. and Another, the court stated that violation of FEMA law is not treated as a criminal penalty. Under the Conservation of Foreign Exchange and Prevention of Smuggling Activities, 1974 (COFEPOSA) violation of foreign exchange activities would attract criminal punishments.

These punishments under COFEPOSA would also include preventive detention. Both acts deal with different fields. FEMA deals with the promotion and maintenance of foreign exchange in India, whereas the COFEPOSA act deals with the violation of foreign exchange regulation and the prevention of smuggling activities. On construing the above laws, if an individual commits a civil offense under FEMA, then if interpreted under the COFEPOSA Act, the punishment would be criminal in nature.  Therefore if a person is punished for possession of foreign currency in India under COFEPOSA, then a criminal penalty would be levied on the individual. Possession of Foreign currency in India must be strictly regulated, which would deter offenders from carrying out further offenses.

Acquisition of Immovable Property in India as per FEMA guidelines is related to individuals who...