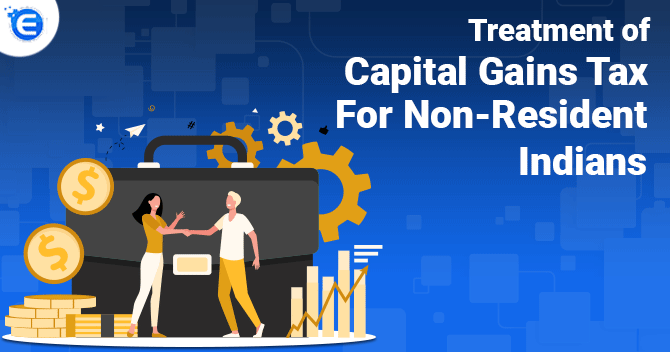 An individual’s taxability is determined by his or her residence status. A resident taxpayer, for example, is required to pay tax on all of his income derived globally; while, a non-resident Indian (NRI) is only required to pay income tax on income generated in India. NRIs can invest in equity shares and mutual funds as long as they follow the regulations of the Foreign Exchange Management Act (FEMA). Any capital gain earned from the transfer of a capital asset that is located in India is taxed in India. Except for the implementation of TDS regulations, the capital gains tax laws for NRIs are comparable to those for resident individuals. The taxability of capital gains, like that of resident investors, is determined by the holding period and the kind of assets sold. Hence, capital gains tax varies with the kind of security/asset held by an NRI.

A holding duration of more than 12 months is considered to be long-term for listed shares, the units of equity-oriented funds or the units of a business trust, and zero-coupon bonds, while less than 12 months is considered to be short-term. Gains on the sale of long-term assets are termed as long-term capital gains (LTCG), whereas gains on the sale of short-term assets are called short-term capital gains (STCG).

For NRIs, LTCG on stock and equity-related assets is taxed at 10% above the Rs. 1 lakh exemption limit. To sell equity shares or equity-oriented units, a securities transaction tax (STT) must be paid. Remember that no indexation advantage on the cost of purchase is permitted for equity-oriented assets. Short-term capital gains from stock and equity-related investments are taxed at a flat 15% rate.

Holding unlisted shares and immovable property for more than 24 months is considered to be long-term while holding them for less than 24 months is considered to be short-term. Long-term capital gains on unlisted shares and real estate are taxed at 20% with indexation. Indexation enables the cost of assets to be increased by factoring in inflation. However, without the advantage of indexation, such securities have a tax burden of 10%.

Short-term capital gains on these assets, on the other hand, will be included in other taxable income and taxed at the individual’s applicable slab rate. For example, if an individual’s tax rate is 20%, STCG will be taxed at 20%.

Capital Gains Tax on debt funds and other assets

Long-term capital gains earned on debt-oriented investments/assets or any other capital asset will be subjected to be taxed at a rate of 20% with indexation. Short-term capital gains are added to other taxable income and are taxed at the individual’s applicable slab rate. A 4% education and higher education cess will be levied on both short-term and long-term tax rates.

Exemption from tax and TDS provisions

Furthermore, the foregoing rates do not include the health and education cess, which is charged at a rate of 4% over and above the income tax rates and surcharge. Non-resident Indians, unlike resident Indians, are not eligible for the basic exemption limit.

Any redemption made by a non-resident Indian is subject to tax deduction at source (TDS) at the highest tax rates. The TDS on any short-term capital gain on unlisted stocks or securities will be the highest tax slab rate, which is 30%.

Non-resident Indians are also required to pay advance tax if their expected tax payable in a fiscal year exceeds rupees 10,000. If one fails to pay advance tax as per the provisions, he or she will be charged interest under Sections 234B and 234C.

Non-residents can seek relief by utilizing the DTAA (Double Taxation Avoidance Agreement) if India and their home nation have signed a tax treaty together. Non-residents can (a) pay tax in either country or (b) pay tax in both countries and seek DTAA relief in the country of residency under the said treaty.

NRIs can invest in equity securities of both listed and unlisted Indian enterprises, as well as in Indian mutual funds, subject to the rules and regulations laid down by Foreign Exchange Management Act (FEMA)[1] and RBI. The tax rate on capital gains made on such securities is determined by the type of instrument and the length of time non-residents hold it before selling it. Further, non-residents may be exempt from double taxes if India has signed a Double Taxation Avoidance Agreement (DTAA) with the nation in which they live. According to the treaty, NRIs can pay taxes in either nation or pay taxes in both countries and thereafter receive tax relief in the country of their residence.

Read our article:Tax Implications of Sale of Immovable Property by Non-Resident Seller

Overview of FDI policy for the E-Commerce sector The Government of India (GOI) has brought abou...

Key Differences between Inbound and...

External Commercial Borrowing (ECB) ECB is basically a loan availed by an Indian entity from a...