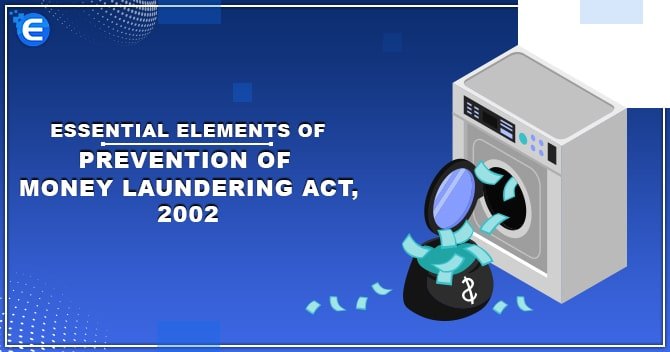 Authority for Implementing the Prevention of Money Laundering Act

The Enforcement Directorate, Department of Revenue, under the ministry of Finance, investigates the money laundering offences under the Prevention of Money Laundering Act 2002.

Powers of the investigating officers under the Act

The investigating officer’s powers include the following:

Applicability of the Provisions of the Prevention of Money Laundering Act

It may be noted that the provisions of the Act shall apply to each person who directly/indirectly attempts to indulge, knowingly assists or knowingly is a party or is involved in any process/activity connected to the proceeds of crime, including the concealment, possession, acquisition or use and claiming it as untainted property will be guilty of money laundering.

Here person shall include:

Therefore apart from the natural person, legal entities are also covered under the expression person under the Act.

Proceeds of crime refer to any property derived or obtained, directly or indirectly, by a person due to criminal activity pertaining to a scheduled offence or the value of any such property.

Part B has been omitted by the 2012 amendment, and all the offences have been placed in Part A of the schedule.

Part C deals with trans-border crimes, and it is a crucial step in tackling money laundering across international boundaries.

If a transaction of acquisition of property is part of the inter-connected transactions, the burden to establish that such property is not connected to the activity of money laundering is upon the person in ownership, control or in possession of the property though not accused of Section 3 offence under PMLA, provided one or more interconnected transactions is or are proved to be involved in Money Laundering.

The ultimate objective of any criminal enterprise is to make profits. Money laundering is one of the ways through which criminal proceeds are made by hiding their origin. The Prevention of Money Laundering Amendment Act 2013 was made stringent with a view to tackle money laundering. Some stringent provisions are placed under the Prevention of Money Laundering Act (Amendment) against a person who commits the offence.

Read our article:Tracing the Developments in the Prevention of Money Laundering Act, 2002

Section 45 of PMLA applies to those...

A recent order of the Delhi Court, while deciding the question related to regular bail applicat...