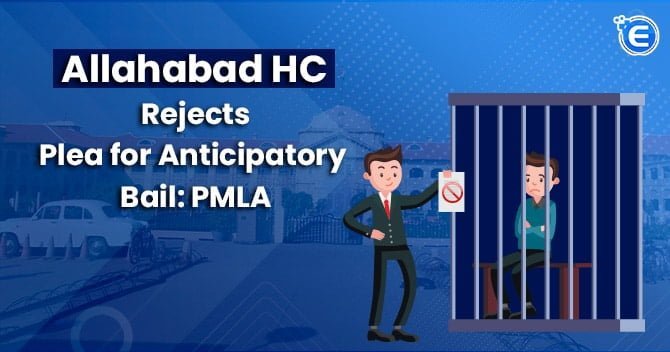 In the case of Anirudh Kamal Shukla v. Union of India, the Allahabad High Court ruled that for money-launderers Jail is the rule & bail is an exception. The Hon’ble court stated this while rejecting the application for anticipatory bail application filed by a person who was booked under the Prevention of Money Laundering Act, 2002. The bench dealing with this matter ruled that money laundering is a serious offence which poses economic threat to the national interest & is committed by those white collar offenders who are rooted in the society and can’t be traced out easily. In this article, we will discuss the facts of the case and the ruling of the HC.

Background of the matter

The bench of Justice Kishan Pahal was dealing with an anticipatory bail application filed by one Anirudh Kamal Shukla booked under Section 3/4 of PMLA 2002. Allegations were made against the applicant i.e., Anirudh Kamal Shukla, that he along with his brother entered into a criminal conspiracy with two people, namely- RK Mishra, Senior Branch Manager Credit and Vinny Sodhi for sanction of an overdraft limit of 2.5 lakh rupees for business purposes against the mortgaged property of Ram Nath Sharma by submitting fake documents.

According to the investigation, 25000 rupees was transferred to the applicants’ current account on 6th November 2006. This money was used in the business and this has been admitted by the applicant as well.

What is anticipatory bail?

Unlike an ordinary bail, which is granted to a person who is under arrest, in case of anticipatory bail, a person is directed to be released on bail even before an arrest is made.

Arguments put forth by the Applicant

The applicant while presenting his bail application argued before the hon’ble court, stating that the only allegation against him was that an amount of 25k rupees was transacted from OD mortgaged loan account to the current account of the borrower i.e., Ashwani Kumar Shukla which was used in the business.

The applicant further argued in his defence that he had not been arrested by the law enforcement agency- Enforcement Directorate since the filing of the complaint in the last 8 years and that the he was fully cooperating with the ED since then and that there is no likelihood of the offence being repeated by him.

Submissions made against the Anticipatory bail application

The counsel for the ED in its arguments against the anticipatory bail application, stated that OD mortgaged loan account was opened in the name of one Ashwani Kumar Shukla with the applicant with the Bank of India from forged property documents made available by co-accused person Vikram Dixit through the guarantor Ram Nath Sharma.

The Court observed that as per the provisions of the PML Act 2002[1], there are twin conditions that must be satisfied and complied with before bail can be granted to an accused person. The Supreme Court had held that once a request has been made for anticipatory bail in connection with an offence under PMLA, although the application is made under Section 438 CrPc, the principles and rigors of Section 45 PMLA must get triggered.

Section 45 of the PML Act imposes twin conditions for grant of bail to a person accused of an offence which is punishable with imprisonment for a term of more than 3 years under Part of the Schedule of the Act. These two conditions are as follows:

After analysing the facts of this case and taking into account the material put before the Hon’ble court, the Hon’ble court was of the prima facie view that it cannot be held that the applicant in this case was not guilty of the offence or that he is unlikely to commit any such offence while out on bail. Hence the one of the twin conditions for grant of bail to a person accused of an offence could not be met. Therefore the Allahabad High Court dismissed the bail application. Having said that, the court also stated that the observations made here are exclusively for deciding the anticipatory bail application and that it will not affect the trial or the decision of the regular bail application.

The Allahabad HC held that the money laundering offence is committed with proper conspiracy and deliberate design with the intention of personal gain without thinking about its consequence and effect to the society.  Hence Jail is the rule and bail is an exception for money launderers. It was held in this case that anticipatory bail can only be given in exceptional cases where the court believes that the applicant has been falsely implicated in the crime and that he would not misuse his liberty.

Money laundering is generally viewed as the conversion of property derived from a criminal offe...