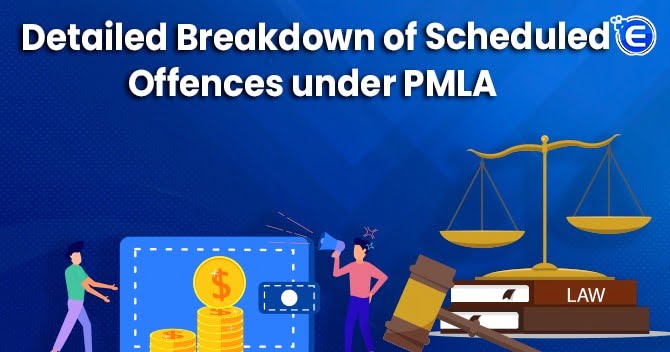 Concealment of wealth, whether earned legally or illegally, is not new. To curb this practice of money laundering, the central government has brought special legislation like the Prevention of Money Laundering Act (PMLA, 2002)[1] to plug the gaps used to evade the payment of taxes and compliances with other consistent laws.

What are Proceeds of Crime?

What are Scheduled Offences?

The offences covered in the Schedule of the PMLA, 2002 are termed as Scheduled Offences with respect to Section 2(1)(y) of the Prevention of Money Laundering Act. The listed schedule offences are divided into Part A, Part B, and Part C.

Part A of the Schedule provides a description of the offences listed under various Acts, which requires no monetary limit to initiate a proceeding under the PMLA. Part B of the Schedule covers offences having a value of more than Rs. 1 crore or more, and Part C deals with offences involving cross-border implications.

The Parts mentioned above of the schedule are further explained in detail to understand the Scheduled offences under PMLA better. The following legislations and listed offences are:

The statutes and offences specified under Part A of the Schedule:

Paragraph 11-Securities and Exchange Board of India, 1992;

Paragraph 28- The Suppression of Unlawful Acts against Safety of Maritime Navigation and Fixed Platforms of Continental Shelf Act, 2002;

The statutes and offences specified under Part B of the Schedule:

The offence of representing false documents, false declaration, etc., is described under the Part B of the Scheduled Offences under PMLA.

The offence specified under Part C of the Schedule:

This part of the schedule deals with trans-border crimes and is vital in global curbing of money laundering crimes.

Any scheduled offence that has been committed in India and proceeds of the crimes, thereof transferred or attempt has been made to place outside the territory of India.

Investigation of Scheduled offences under PMLA

Enforcement Directorate (ED) enjoys a wide range of administrative and implementing powers with respect to scheduled offences under PMLA. Section 48 and 49 of the Prevention of Money Laundering Act, 2002, provide the Enforcement Directorate’s officers empowered to investigate money laundering and terror financing cases. When the ED is of the view that any process of activity involved with proceeds of crime or committed offence is in the list of scheduled offences under PMLA, then it gets the power to investigate the matter further.

Other agencies that are entrusted with investigating the offences under PMLA are State Police, Customs, SEBI, RIU, CBI, and NCB under their respective legislations.

Money Laundering is a continuous offence, it continues till any person enjoys the time proceeds of crime, and they shall be guilty of the offence of money laundering. The scheduled offences under PMLA cover no. of offences of various legislations which are severe and create instability in the society if not tackled directly. If any person commits scheduled offences under PMLA, then only they will be charged under section 3 of the PMLA.The data significantly highlights that there is a need to streamline the applicability of PMLA consultant and ensures more focus on serious offences.The government should regularly remove the non-serious offences that may dilute the true objective of the PMLA.

Read our Article: Tracing the Developments in the Prevention of Money Laundering Act, 2002