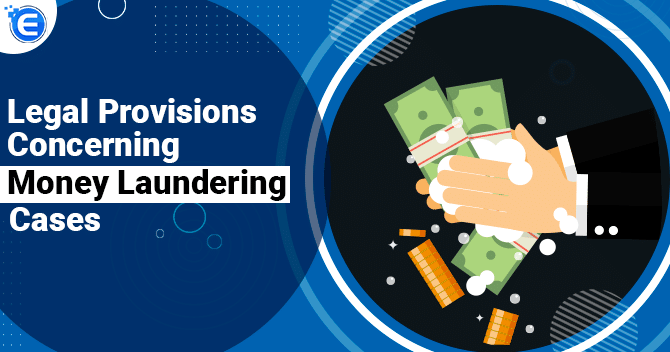 In case of money laundering, the launderer earns money through illegal activities such as child abuse, bribery, corruption etc., but as per records, the money is shown in the accounts as legally earned money.

For instance- Suppose A has a business of selling clothes, but the origin from where he makes investment is through some illegitimate source and the money that he makes from such illegal activity, he invests it in apparel business turning the illegal money into legal. This entire process is called as money laundering.

How do criminals turn illegal money into legal?

The criminal transfers money into a financial institution, and when the money is stored in the bank, they may ask about the source of such money. Hence when money is made from an illegal source, the person will hide the illegal earning source by furnishing other legitimate investments such as showing shares in any company and claim that due to their share, they are making profits. When banks accept their false theory, the money is deposited in the bank as legitimate one and can withdraw whenever they wish.

Banks are institutions that fund different ventures, start-ups and they play a pivotal role in the economic growth as they accept deposits that help in growing the economy. If banks  accept deposits from someone who is involved in illegal activity, then their market value can suffer as their repute would be tarnished, and the customers’ trust can be also be affected. Hence banks should follow guidelines laid down by the RBI in case of a suspicious transaction.

The Ministry of Finance set up an independent body in 2004 called Finance Intelligence Unit- India to undertake, inspect and promulgate any information which is connected to dubious transactions. FIU-Ind combat money laundering at global levels.

Their main functions are discussed below:

They are reported about transactions that are made in the purchase or sale of immoveable property, NGOs, cross border and suspicious transactions.

They inspect those transactions that are suspicious in nature.

They share data with foreign as well as national intelligence unit.

They identify and deliberate over different mechanisms for prevention of money laundering.

They act like a reservoir of data which is obtained from different reporting agencies.

The transactions mentioned below should be reported:

A proper record must be maintained about the mode of transaction, the value and the currency involved, transaction date and the parties involved in the transaction.

A bank is required to perform due diligence for the client so that they possess information about their customers who deposit or take loan from them. They should ask clients to comply with KYC requirements.

A person or an organization may be liable for the offence of money laundering. Section 3 of the PMLA 2002 makes directly involved or indirectly involved party guilty. Those that are proved to be involved in the offence of money laundering shall be punished with a minimum imprisonment of 3 years which can extend to 7 years, along with a fine of 5 lakh rupees.

The provision of bail in our legal system necessitates that the accused person shall be present in the court when he is required, and anyone charged with a criminal offence can get bail on paying a specific amount. However, court takes into account various things before granting bail to an accused.

Section 45 of the PML Act 2002 deals with the provision of bail for those charged with the offence of money laundering. Bail can be granted to a person charged with imprisonment for less than 3 years, and in case of punishment of more than 3 years, bail bond must be filed, and court grants bail after receiving security in monetary terms that they must appear in court when required.

Conditions under which bail is granted by special court

The following are the conditions:

Money laundering cases can have serious implications on the economy of a nation therefore, the investigating agencies have some significant responsibilities. The directorate of enforcement under the Department of Revenue and the director of the FIU have been appointed to exercise exclusive powers under the relevant sections of PML Act 2002.

What you must know about New Land A...

If you are going through some legal proceedings with regard to land acquisition, then you shoul...

Definition & Format of an Inde...

A bond is an important agreement that protects a lender from losses if the borrower defaults. I...

Revocation of Power of Attorney...

A power of attorney (PoA) is a type of legal document which allows an individual to appoint som...